It was snowing outside, and Little Miss and I had made the decision not to head out in the snow for her Hip Hop class. The Boy and Mr. Sunflower had left to go to Jiu Jitsu before the snow really got bad. Amazingly, this was on March 20, 2015. Yes, right before Spring officially started at 6:45 P.M. Eastern Time, the snow was falling like it was the middle of winter. Little did I know that Disney Social Media Moms Celebration was in our family’s future. And I can tell you how not to announce to the kids they’re going to Disney Social Media Moms Celebration.

It was just a regular Friday night on Long Island, even with the snow falling as Winter officially turned into Spring. The kids had a play date right after school, because the snow falling wasn’t too bad. It was still rather easy to drive, and it wasn’t sticking. We returned home after the play date, the kids ate a little something before activities started. Mr. Sunflower went off with The Boy to Jiu Jitsu with the roads still not awful, but after an hour, when Little Miss was supposed to go to Hip Hop, I looked out the window and was like “Hell no. Mommy’s not driving in this. Let’s skip dance tonight.” She agreed.

Mr. Sunflower returned home with The Boy, and I sat down at my “office area” and opened up my email. All my husband heard was “Holy sh&t. I got invited.” He looked at me from the couch and asked “To what?” I called him over, and he read the invite. He looked at me and said “Well, you must be doing something right if a brand like Disney wants you to experience something like this, right?” I just stared in disbelief.

Disney Social Media Moms Celebration is in our family’s future

Listen, it’s not that I think I’m unworthy of this kind of invite. Trust me. I know I’m worthy. However, I’m not a huge Disney cheerleader. I wouldn’t say I’m the opposite of their cheerleader, but I’m not the biggest fan of Disney. Well, I’m not a huge fan of Disney Cruise Line. Disney Parks I still think are rather fun, and magical. They treat their guests well. Unfortunately, the Disney Cruise Line doesn’t understand the “treating guests well” part of Disney. They have a lot to learn, and need a lot more guidance in this area.

Now that’s out of the way! I can focus on the sheer disbelief of being asked to attend #DisneySMMC – because seriously, I hardly mention Disney on my site. However, it seems, that’s a good thing. Disney wants to show those of us that aren’t as clued into Disney, what Disney is all about. They want to have my family experience the magic alongside me, and they want to offer it at a super discounted price. Who am I to say no to all of that, especially since my kids get to be a part of the whole experience!

Mr. Sunflower and I aren’t in a great financial place this year, since we got hit hard last year with a flood in our home. However, we decided to break into our savings for this one, and say YES to the Disney Social Media Moms Celebration. Personally, I figured this was my one shot at being invited, so let’s grab the bull by the horns and ride it for all it’s worth! Right?!!!

Next was announcing it to the kids. I figured it would be great if they opened up the Magic Bands. I was totally wrong. The bands arrived on the perfect day, my husband’s birthday. I wrapped the box up in tissue paper, lots of it. I told Mr. Sunflower “We’ll have the kids help you “open” your birthday gift. It’ll be fun. I’ll get it on camera, so we can put it up on YouTube.” He said sure.

He got home from work, the kids had made him cards and he sat down with the cards, and the box. I sat across from them with my camera (which looked like it was focused, but apparently not as focused as one would have liked.) He read the cards, and then I started the camera up to record the whole reveal. Both kids helped get the tissue paper off the box, and Little Miss reads “Magic Bands” written on the box. She had no idea what that meant. Mr. Sunflower opened the box up, and revealed four magic bands: yellow, orange, green and blue.

All The Boy wanted was the band with his name on it. He wasn’t listening to what the bands were for, and even though my husband tried to get some kind of reaction out of them about what the bands meant, all The Boy cared about was putting that damn Magic Band on his wrist. Totally underwhelming. We told them the bands opened up hotel room doors. Little Miss looked at me and her father and asked “what hotel room doors?” We answered “Disney World ones.” She again looked at us and said “Are you serious?”

Now, this response from her is indicative of how often my husband screws around with her. He often tells her exactly what she wants to hear, and then ends it with “Just kidding.” He thinks it’s funny to mess with our kids, get them excited about something, and then go “just kidding.” Little Miss thought this was some kind of elaborate joke we were playing on her. When she realized it wasn’t, she was excited. Of course, that came AFTER the camera was turned off. Damn kid.

The Boy? He was most excited when we told him he’d be missing just a few days of school to go to Disney World. I got that on camera, which I’m sure his teacher will be most excited to see.

Needless to say, the video PROBABLY won’t make it onto my site. We’re still trying to edit some of it, to see if we can remove someone saying something she shouldn’t have said. For once, it wasn’t me. I was very good when filming. No cursing at all, even with the frustration these kids were causing me by their very odd reaction to being told they were going to Disney World. (PS-Little Miss didn’t curse on camera, she just said her brother’s name, and we don’t do kids’ names on the internet here at November Sunflower!)

We did, once the whole thing SUNK IN and The Boy wasn’t as obsessed with the damn Magic Bands, get a photo to capture the excitement. 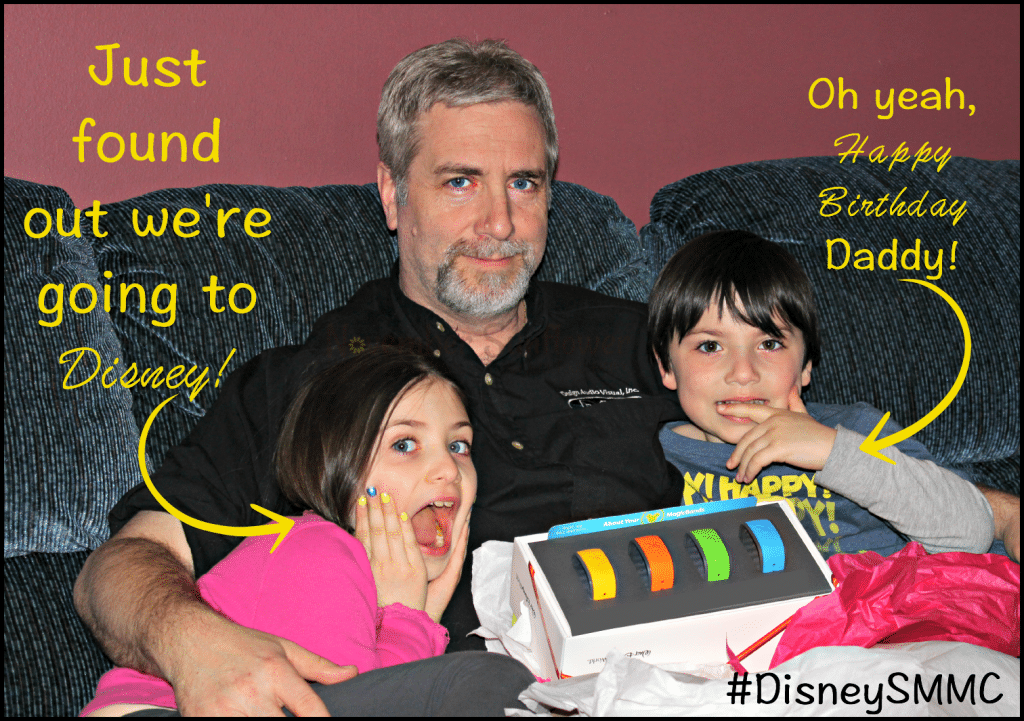 Sooo, the moral of this story is this: even if you’re not a huge Disney writer, you have a shot to get invited AND when you do, figure out how to announce it to the kids using something other than the Magic Bands. Perhaps do a more subtle reveal – like a huge Disney World map? I don’t know, I’m not very good at this, as you can see from what happened to us!