Friendship is a million little things

Isn’t it so true? Who said it first? I haven’t a clue. However, it’s no doubt the truest statement about friendship. Friendship means so many different things to so many different people. In a world where we “friend” on Facebook with people we aren’t actually friends with: how does one qualify real friends from acquaintances? The million little things, that’s how! 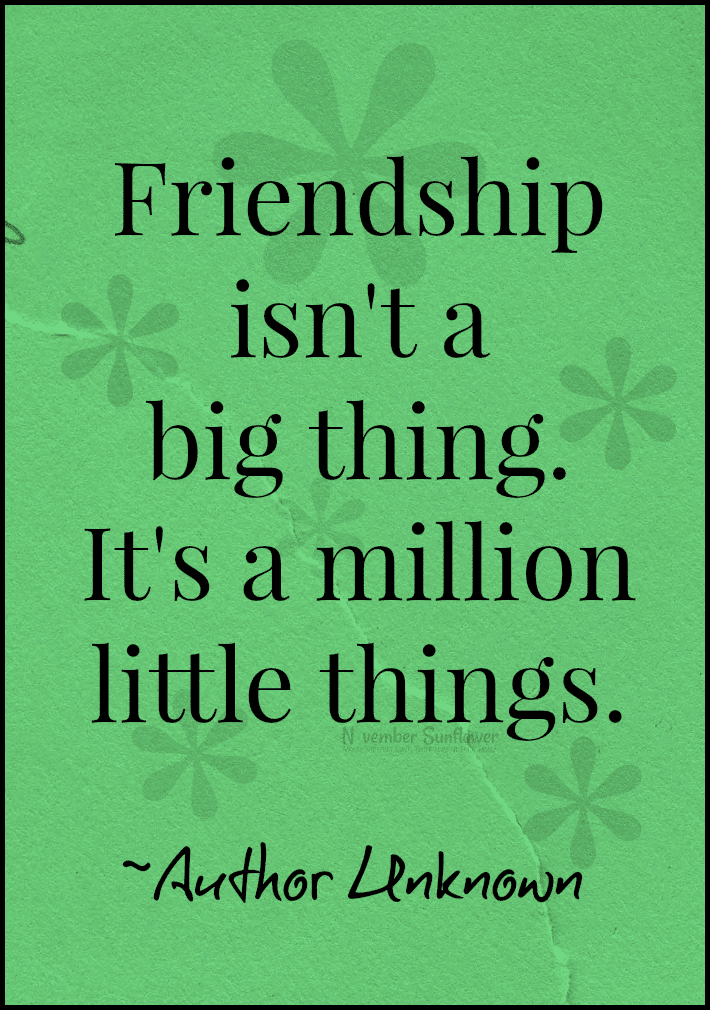 What does “Friendship is a million little things” mean?

Basically, friendship isn’t only about the grand gestures made. Is it great to have a friend who take you on a great vacation, and never ask you to pay for a thing? Hell yes. I don’t think anyone says no to a friend wanting to give such a grand gesture gift. If you’re lucky enough to have a friend offer such a gift, grab and appreciate, it. However, if a friend only offers grand gesture gifts, but also doesn’t have a clue what your kid’s name is, chances are, it’s not legit friendship. You’ve got a generous acquaintance, and there’s nothing wrong with that, all all!

Friendship, though? It’s in the details. The million little things happening throughout your day, week, month, year, and decade. I’m not a perfect person, or a perfect friend. I’ve lost touch with friends throughout the years. However, when we reconnect, we don’t miss a beat. Friendships like these are few and far between. Normally, these friendships are ones you hardwire into your SOUL as a kid. I’ve two friends in my life I can lose touch with for long periods of time, and pick up right where we left off, without missing a beat. Both of those friends are ones I made during my single digit years.

Friendships solidified in childhood are unique. No matter how many years pass, we’re the same “kids” from all those years ago. However, now we’re dealing with adult problems, and kids of our own. Our million little things don’t encompass every day occurrences, but do include knowing each other so well, we’re always on the same page when we reconnect. Friendships are truly about the little things, but sometimes the little things are different for different friendships.

Going through life, there are times certain people enter, and a friendship is born. Do we need to talk every day? No. However, these are people I know well. I know the answer to a question, before I even ask the question. I know the exact eye roll she’ll give when certain people are talking. I can look across the room, spot my friend and the look on her face tells me exactly what’s going on in her mind. However, I didn’t know her car didn’t start two mornings ago. Poor thing hustled to get her kids to school with the help of her mother.

On the other hand, the same friend knows I’m the first person to call when she needs a ride from the train station at midnight in subzero weather. Why? She knows I’m normally awake, and working. It’s still a close friendship. Knowing these factoids about one another are the million things that make it special for us.

If I need to talk “TRUTH,” I need my one friend who tells me the truth, not the truth she thinks I want to hear. Yes, that’s one of those million little things that makes a friendship. I go to her for the blunt, often brutal, honesty. She knows when she tells me the actual truth, I’ll accept it and not have a temper tantrum. It’s a trust that’s built between two people, thanks to those million little things.

I used to have a friend who’d say “Yeah, yeah, yeah” during a conversation. When that came out of his mouth, I knew he was no longer listening to anything. He was done, and had his fill of the topic being discussed. Every time “yeah, yeah, yeah” came out of his mouth, I’d change gears, and start talking about something totally off the wall. He’d take him a minute to catch up with me, and we’d have a good laugh. Unfortunately, the million little things between us weren’t enough, which also happens. C’est la vie.