Fighting for a Warrior: Melanoma will not defeat my cousin 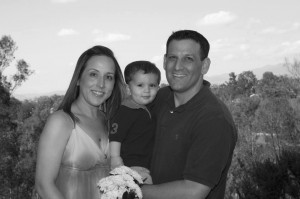 In 2009, my cousin found out that he was about to start a family with his amazing wife, Buckley, who is a fellow blogger at Little Orso. It was a happy time for our family, as we always love when our family gets bigger! However, in February of 2010, right before Valentine’s Day, and right before my cousin’s 30th birthday, their daughter’s heart stopped beating. She was gone. Our Tuscany left this world, but never our family.

Justyn is a former Marine. Well, let me re-phrase that. He will always be a Marine, because once a Marine, always a Marine. He had served his country, as a Marine, during a time of war, right after 9/11. He was overseas, and he came back to us. He stayed in California, married his love, and created a life for himself. He is a strong man. Stronger than his circumstances. So he, and Buckley, met this loss head-on. They didn’t hide, they decided to bring awareness to Still Birth. They became part of a huge community of parents who had lost children to Still Birth. He didn’t allow the pain to overshadow the fact that he was, in fact, a father.

A few months later, life hit him with a bit of a blow – he was diagnosed with Skin Cancer. Again, he didn’t say “Why me? Haven’t I been through enough. I have lost my daughter. Give me a break.” Nope, instead he said “What’s next? What do I do to get this taken care of?” He went through treatments, and while doing so, was told his home could no longer be lived in. MOLD. They had to move, or he’d be even more sick. Both of them, TOGETHER, pushed through.

Lost his daughter, his health, and his home……..but NEVER did he get down. Just kept pushing through, finding the good in each situation. He got through treatment, got the all clear and also found out he was going to be a father, for the second time. Things were looking up!

Little Gianni was born in March of 2011. A son. And he was always told of his older sister. He will always know Tuscany. The first year was fantastic, he celebrated his 1st birthday…….however, Justyn was told the cancer was back, and it had spread. It was more aggressive this time around, and new drugs would need to be used to cure him this time around.

Here’s the deal. There is no cure at this time for my cousin. Each month, he gets meds that are only partially covered by his insurance. The rest of the treatments are $2,000.00 out of pocket. Buckley lost her job soon after Gianni was born, they only have Justyn’s job to pay the bills. He pushes himself to go to work, because he knows without that job, he won’t have an income, nor will he have insurance.

Bills have to be paid – things like utilities, house payments, food, and the costs of having a growing baby boy. All of these things must be paid, along with the extra $2000.00 per month for the meds KEEPING HIM ALIVE. Without the meds, my cousin won’t survive. They are maintaining, not curing, him. Without them, he won’t be around to be the amazing husband he is, and the outstanding father he has become.

My cousin, who served his country with amazing pride, gets no help from the military. There’s no program to help him with finances, even though he protected all of us here in the U.S.A. during a time of war. It’s upsetting, but yet, my cousin is not one to complain, or be ungrateful for what the Marines did give him: an amazing group of friends.

Justyn has so many people who love him. Adore him. We all want remove the stress of worrying about paying bills, along with his meds. It is our mission to help Buckley keep her husband as “stress free” as possible, so he can focus on getting healthy, and staying strong, for his son.

We are all FIGHTING for a Warrior.

A group has been formed on Facebook. It’s just to show our support, keep people posted on what’s being done for Justyn, and his family. It’s also a place where my cousin sees the amazing support so many people are giving him. It means a lot to him to read the messages, or have them read to him, as he keeps the fight going!

Take a minute to follow the page, it’s called Fighting for a Warrior.

When the page reaches 510 likes, they will be doing a giveaway. So please, head over and get to liking. And share the page if you can!

The logo was created by Anthony Suarez. It’s beautiful, and it’s been so well-received, that a shirt is now being created for our fight!

If you want to pre-order a shirt, to support my cousin, you can do that right now! The t-shirts are all $10, and shipping will be $3 for one shirt, and $1 for each additional shirt.

Once you are on the FB post, you can read all the details, and then leave your name and email. Or message them with your info! They will contact you to let you know how to pay, and to find out where to mail the shirts when they are in!

If you can’t order a shirt, no worries. We’re just so thankful for the many likes on the page. The support is amazing. Please, share the page, and help spread the word for EVERYONE out there fighting against Melanoma.

Thank you all so much, you mean the world to me!