Intense Pulsed Light, also referred to as IPL, Laser working on what I call my brown spots from hell. The medical term? I believe it’s skin pigmentation problem thanks to good old sun damage. Whatever one calls them, they suck, and I’ve been self conscious of them for over ten years. I’ve spent, if I have to guess, over 1000 dollars on a variety of products promising me the spots would fade. They did not fade. Then IPL was introduced to me. 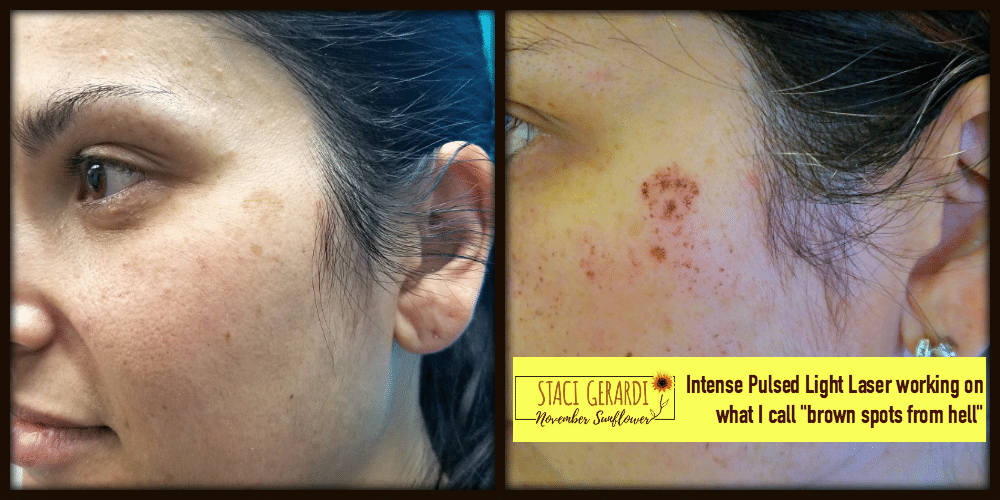 Ten years. I’ve been trying to find a way to fade one specific brown spot on my face. It started much smaller, then grew to encompass much more of my face than it really needed to. Apparently, the more I tried to get rid of it, I angered it, and it grew. I’m a fairly confident woman, who rarely looks in a mirror. Whenever I do look into a mirror, all I see is this horrific brown splotch on the side of my face. I don’t wear make up, so it wasn’t going to be hidden.

Ironically, even 10 years ago when I got married, none of the make up in the world covered it. It lessened the intensity of it, but it was there. I was painfully aware of it at all times. You could say I am obsessed with this spot from hell. When I walked into Dr. Rafal’s office for the firs time, to meet Nurse Lauren and the entire staff, to discuss THERMIsmooth® body for my stubborn belly cellulite, IPL was brought up.

Almost immediately upon seeing my face, Dr. Rafal looked at Nurse Lauren and said “We need to do IPL on her. Definitely.” I had no idea what that was, but once she said it was for skin pigmentation, I knew I was going to be game for it. I knew she was looking right at my big brown spot. It was singing to her.

What is IPL (Intense Pulsed Light)?

IPL is exactly what it sounds like. It’s an intense pulse of light laser that is used all over your face in order to bring the pigment up out of your skin. It’ll bring it to the surface, make it super dark, and then after a few days, start to flake off. It leaves a lighter brown spot. It fades it. I’ll need at least two, perhaps three, treatments for my brown spot.

Does it hurt? Yeah. I won’t lie. It hurts. Nurse Lauren put a numbing cream all over my face, to help lessen the sting of the IPL. It helps, but it still hurts. It’s nothing I couldn’t handle, but it’s not a pleasant feeling. It’s almost like a rubber band being snapped SUPER HARD against your face. However, it’s not just once. Nurse Lauren has to go over my face three times, but only did my forehead once. Less fat up there in the forehead, it that hurts a bit more than the rest of the face.

IPL is done in small sections with a type of wand, and the light just shoots out right into your face. Science…. it’s rather fascinating.

What happens after the IPL is done?

Nurse Lauren was very honest, and let me know the spots would get much darker. The spots would stay darker for anywhere from a few days, to a week, and then start to flake off. She also let me know my face would be pretty red for a couple of hours following the treatment, and there could be some swelling. It all depended on how well my skin reacted to the treatments.

Well, my skin must have loved the treatment, because I definitely was red for a couple of hours. Spots got dark before I even walked out of the office. Slowly, my face also swelled. 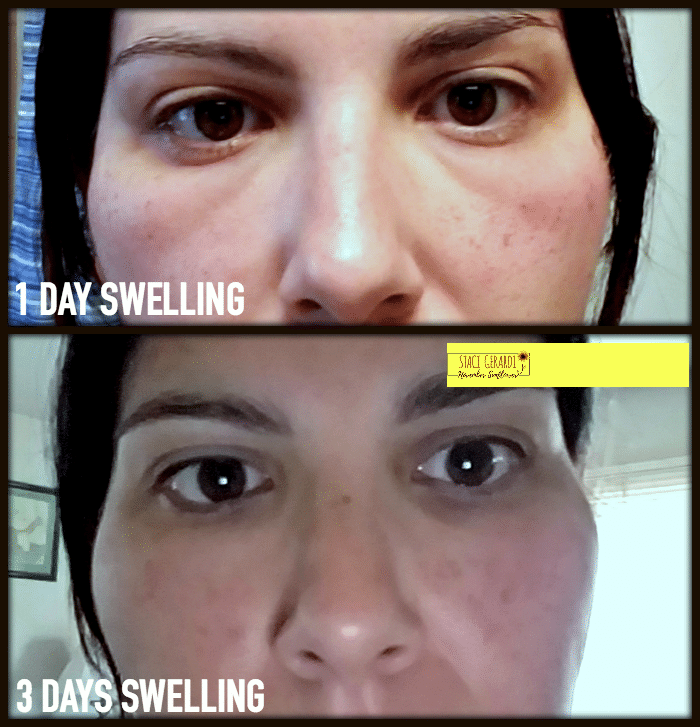 I stayed swollen from Monday night until Thursday afternoon. I freaked the fuck out, and texted Nurse Lauren almost every day. She said it was a good sign, and it was all going to be okay. Dr. Rafal called me, and sent me to the office to pick up her skin cleanser and an ointment that would help with the redness. Still, I was nervous. Plus, it was bizarre. I look down at my smartphone and tablet all day, and all I saw was my puffy cheeks.

Just freaky. Nothing hurt, just swollen. By Thursday, a friend said it just looked like I had cheek implants. I’m not sure if that was a good thing, or not. Friday it was back to normal, and on Saturday, the dark spots started to flake off. Once I saw how well the IPL worked to fade the spots in just one treatment, I texted Nurse Lauren and said “BRING ON THE SWELLING. So worth it. Looking forward to April when we do it again!”