Disclaimer: I received a free ArtSee Studio in order to facilitate this review. Let me correct myself….for my CHILDREN to be able to review ArtSee Studio. I mean, I didn’t really play with it at all…….that’s my story, and I’m sticking to it! The opinions in this are totally 100% from the kids. I just sat by, helped figure out if they needed it, and let them ooo and aaahhh over everything.

It’s nice to own an iPad. I love mine, I use it all day long, every day. If I had it on a network, instead of WiFi, I’d really be in trouble! Now that the kids have Kindle Fire HDs of their very own, I don’t get as much grief, and fighting, I once got just having the iPad in the house. It was nice, and peaceful for a few months…..

Luckily, for me, I got my hands on the ArtSee Studio™. It all went downhill after that. The fighting started again, my iPad became the tablet of choice in the house again. It hasn’t been pretty, but man, so worth it. The kids finally started sharing it, and working together on great artwork.

Just so you don’t waste your efforts reading the post, and being totally PO’d at me once you finish and find out you won’t be able to use it, here’s a HUGE note for those of you reading: If you don’t have a regular sized iPad…..you’re out of luck on this toy. It only works with a regular sized iPad. No mini ones, no Android devices, and no iPods, or iPhones. It’s a great toy, but limited for the moment, to just iPad owners.

My kids have had many drawing apps on their Kindles, as well as my iPad. They love drawing, but this app, and studio, are a little different. It’s got interactive tools, and kids can animate what they’re working on. Plus, there are sound effects. Each tool does something different, like create sound, or stamps out a themed animal, or automobile. There’s a stylus, which they use to not just draw, but also color, and erase. The stylus’s width can be adjusted easily with a little slider on the screen.

The kids have been drawing, animating, coloring, playing games like connect the dots, and memory. Of course, the kids want to email them to all of our family, and they constantly try to get me to share them on Facebook, or Twitter. Sure, kids, that’s what everyone wants to see all over my Facebook wall and Twitter stream. Although, it’d probably be the most action my Twitter has seen in a long time. Something to think about….. 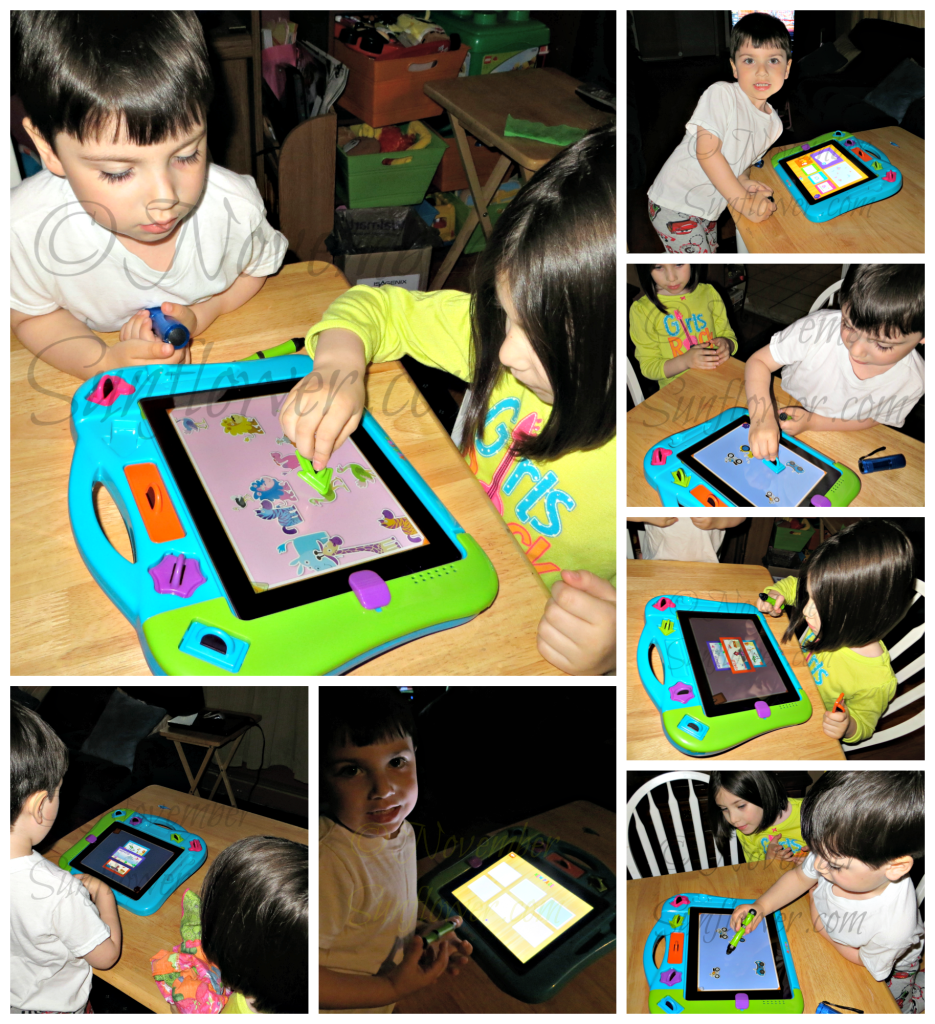 Best way to get the most out of this app and Studio? Only letting the kids play with it when we’re traveling in the car, or on the train, or waiting at Jiu Jitsu, or Dance. It’s still keeping them super interested, and they are UNREAL BEHAVED knowing they’ll be able to play with it. When I spend $39.99 on something, it’s nice to make sure the kids won’t tire of it after using it ONCE.

Use my little tricks, the kids will be thrilled with it for many hours! The younger age, probably three to four, will love it any time, any day, and for hours without stopping. There’s a lot to do on it, and my four year old finds it more entertaining after a longer period of time. My six year old, she loves it, but Little Miss gets a bit bored after about 30 minutes of playing.

My only complaint? The tools don’t click in tight enough, and fall out a little too easily when I’m toting it around in my bag. Easy to fix by just putting them in a smaller bag, and attaching the bag to the studio with a zip tie. Works well for us. The kids like how things aren’t secured with string, as that’s a bit limiting when drawing, and creating. They prefer having the tools, and stylus not tethered to the studio, so we just make it work with the bag being there to drop them into when playing is done, and the studio is ready to be put away.

Two thumbs up rating from the dynamic sunflower duo: 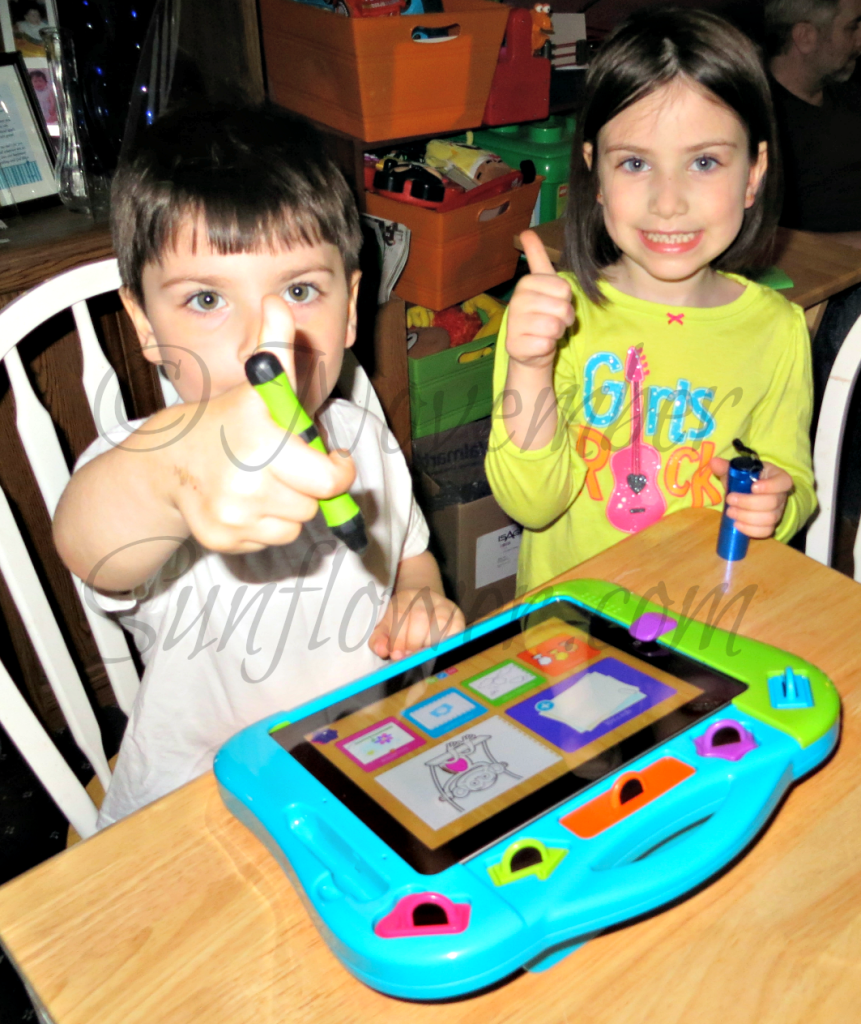