Show your wife you care! Record her favorite shows with FiOS DVR

Want to know how to show your wife you care? Record her favorite shows with FiOS DVR. Mama Sunflower doesn’t watch much television. More often than not, the kids rule the television while I’m home. If it isn’t them, it’s Mr. Sunflower. There’s so few shows on television we BOTH watch, and since I’m usually working while everyone else is watching television, it’s not a big deal for me. Master Chef, Kitchen Nightmares, Top Chef, and Master Chef Juniors are television shows our entire family watches.

Mr. Sunflower and I both watch Suits, and The Affair. The Affair started their second season on October 4th, so throughout the summer, and early September, I was re-watching the first season. I’m getting older, so I needed to refresh my memory! I was away for a couple of weeks, and figured I missed the re-runs. But I didn’t, thanks to Mr. Sunflower. 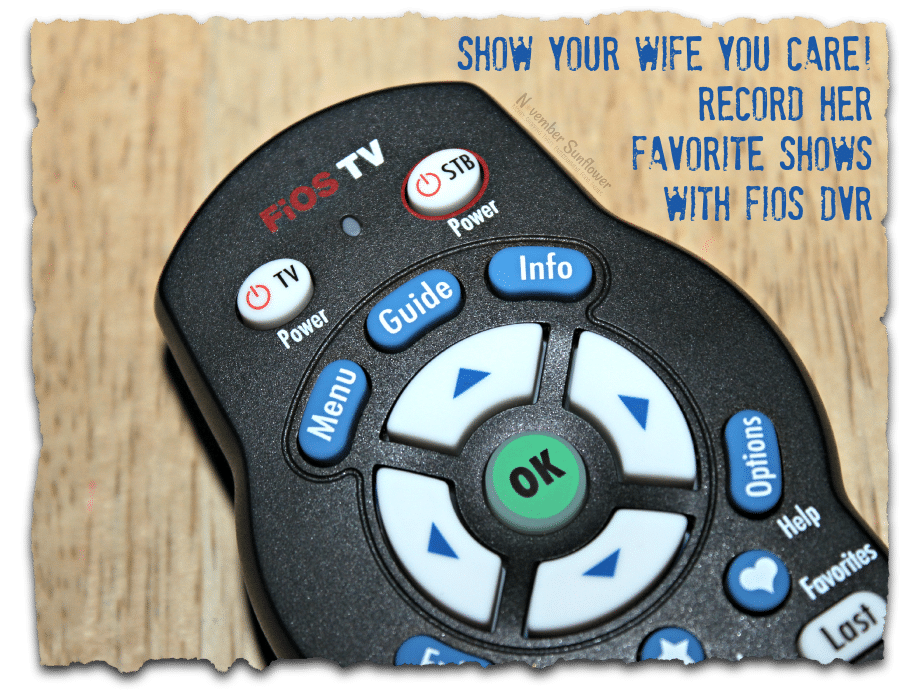 Show your wife you care! Record her favorite shows with FiOS DVR

Even though I’m not a die-hard television watcher, I still have a couple of shows I hate to miss. In previous years, I would kill myself to get home in order to watch Fringe, White Collar and Ground Floor. All of those shows are off the air, so now I focus on just two shows: The Affair and Suits. Both aren’t on regular stations, either. The Affair is on Showtime, and Suits is on USA. Usually, those channels aren’t available when you’re staying at a hotel. In most hotels I’m hunting for USA, and they never offer Showtime.

Both problematic when traveling, right?! Well, it’s what happened while I was away for the first part of September. I couldn’t watch the re-aired season one episodes of The Affair. I convinced myself “you did see them when they first aired, so it’s going to be fine.” Again, not a huge, life-altering ordeal. Just a little bit of a downer. Thankfully, my husband remembered with FiOS, he could record shows. You want to show your wife you care? Record her favorite  shows with FiOS DVR, on the Master Bedroom box, so she can lay in bed upon her return from her travels, and watch to heart’s content.

FiOS makes it super easy to record live shows, pause live shows, and rewind live shows. Even the kids have figured out how to use it. Since it’s all new to me, I’m a little slower to remember we have DVR, let alone remember to use it! It’s super easy to use, and you can record individual shows, or you can record an entire series. You can search for shows based on an actor’s name, which is kind of cool. You can search for specific shows, or movies, or you can go right to the television listings and record from the listings.

So many options. Blows your mind! Personally, I like to record manually. I head to the MENU button, then select DVR. I hit Create Recording, and then I choose Manual Recording. It’s all super simple to see on the screen of your television, no matter what box you’re using. So once you’ve chosen Manual Recording, enter the channel number you want to record; the start date and time; the end time; and the right RECURRING setting. Of course, remember to hit SAVE. If you don’t, nothing will record.

If you’re more into recording an entire series, and then binge watch one rainy day, that’s pretty simple, too. Do it through TV Listings in the Guide, or through the menu guide. It all starts by hitting your MENU button, and just looking for what you want to do. VERY simple to use. I promise, so if you’re new to it, like I am, just go for it.

Or, just rely on your husband to think ahead and do it for you! Any way you dice it, FiOS DVR is pretty cool. The kids no longer have an excuse for staying up late to watch a specific show, or movie. I remind them we can DVR it, so they can watch it the following night, before bedtime.

Oh yeah, Mama Sunflower’s a lot smarter than her kids think she is, BAM!

You all know you want to learn more about Verizon FiOS, and probably can’t wait to order FiOS for your family! We’ve had FiOS for years, and our love of it has only grown each year. #LifeOnFiOS is pretty darn sweet. Believe it.