5 tips for a smooth move

A smooth move? How is it even possible to move from one home to another, and have it be a smooth move? Over the many years I’ve been alive, I’ve moved a few times. I’ve gone from a house to an apartment; an apartment to a house; a house to a condo; a condo to a house. Every time, it wasn’t fun, and I have to say, it was never a smooth move. However, through my mistakes, I can provide much wisdom on how to have a smoother move than I ever had! 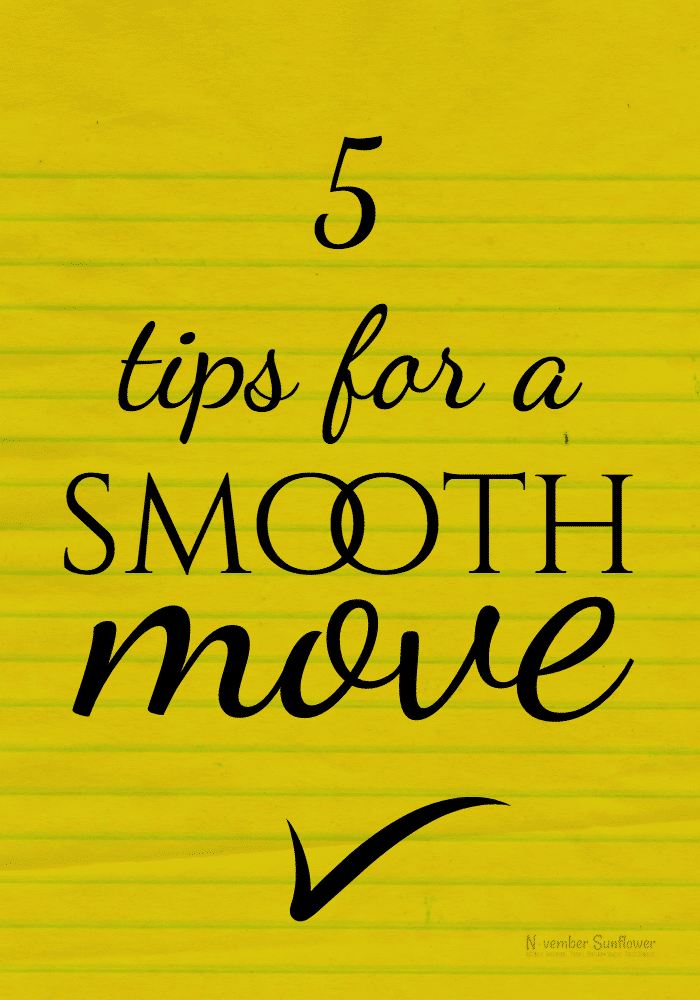 5 tips for a smooth move

I’ve learned this the hard way. Each time I moved, I had just me, and either a boyfriend, family friends, family members, or a husband. What I learned? Don’t rely on family, or friends. It just causes stress no one needs. Pack your boxes; wrap your stuff up yourself, but when it comes to loading it onto the truck, moving it, and unloading it from the truck, HIRE PEOPLE.

Nothing illustrates my point better than the last move we made. When we moved from our condo, to our house, it was my husband with the help of his nephew. I had a two year old, along with a 9 month old to handle. I went to the house, opened it up, and as they unloaded the truck Mr. Sunflower borrowed from work, I did my best to move things into the right areas of the house. Why when I have such an involved family, were we doing this with so few people? Everyone else was at work, because of course, moving doesn’t only happen on the weekends! It happens right smack in the middle of the week. It was awesome. Especially since we had to move everything out in one day, thanks to the timing of closings on our old place, and our new place.

Let me tell you, for certain, you need to think before you pack. Don’t just stand in the center of a room, and throw your stuff into a box. Yes, it makes life easier during the packing process, because you can do it super fast. However, when you unpack in your new, it makes it a nightmare. Plan the packing process with some thought behind it. Pick a room, be strategic about it, and don’t just slap “kitchen” on the boxes for the kitchen. Get a little more descriptive.

Why you ask? I’ll tell you, while you’re unpacking and looking for plates, and utensils, I will GUARANTEE you’ll open every box labeled kitchen, and the things you need will be in the last dang box. By that point, you could have gone out, gotten served a meal, and been back to the house putting the kids to bed. No joke. Get as detailed on the outside of the boxes as possible, without letting people know what kind of awesome stuff you have packed in the boxes, of course.

Label boxes with details, my friends. You’ll thank me, trust me.

You know the approximate dates of your closing. It’s not like it’s a surprise. Yes, it can change a bit, but for the most part, you know when the closing dates will be. Don’t wait until the week before to pack your entire house, it’s a recipe for stress, and will induce marriage-ending fights. Plus, it caters to being less descriptive when labeling those boxes, right? Just start packing things you hardly use when you decide to sell. Kidding, wait until you at least sell the house.

When you give yourself a bit more time to pack, you can fill those boxes to their capacity, and be descriptive when labeling them. Don’t doubt me on this one, trust me. Don’t wait until last minute to pack.

While you’re packing, don’t sit and think about what you “might” want to keep to see if you’ll need it at the new place. If you have any doubts, just chuck it. Less to pack, but also, we all know we’ll never use those things in the new place. It’ll sit in a box, in the new garage, or in the new basement. You’re kids will find it while they pack your house up, after they have moved you into a nursing home. So just throw it out. Don’t move it from the old house, to the new house, if you never unpacked it when you moved into the first house!

If you haven’t needed it this entire time it has been in the box, you won’t need it, so go ahead, throw it out. Or, sell it. Whatever works best for you, but don’t lug that box to the new place, where it’ll sit around for years. It’s not worth the aggravation.

Make sure you’ve got access to FiOS services. Not just internet, and phone, but also television.

When I moved to our first home together, I moved from one township to another. My old township ended up not getting contracts for ALL Verizon FiOS services. Someone at the town didn’t play nice, and FiOS moved to the next town, leaving my old town without television access. Oh well, right? Didn’t bother me at all, except when visiting my parents. When we purchased our first HOUSE, I made sure we moved within the same township as our first place together.

Damn straight I looked for houses in the right township, I wasn’t going to miss out on getting FiOS television, phone, and internet! Once you’ve got a taste of it, you don’t want to ever go back to your old service. We skirted right into the perfect spot: district for the kids was great for school, we were right on the edge of our desired township, and we were still close enough to my family. TRIFECTA baby!

My work requires me to have a fast internet, and that’s exactly what I’m blessed with, because I’ve got Verizon FiOS baby!