Traveling with kids. It’s an art form many people don’t truly understand. Simple trips to the store can be chaotic:

Now imagine getting everyone into the car to leave for a trip lasting longer than three minutes! Personally, I’ve thrown out schedules, because a schedule doesn’t work when traveling with family. It just does not. 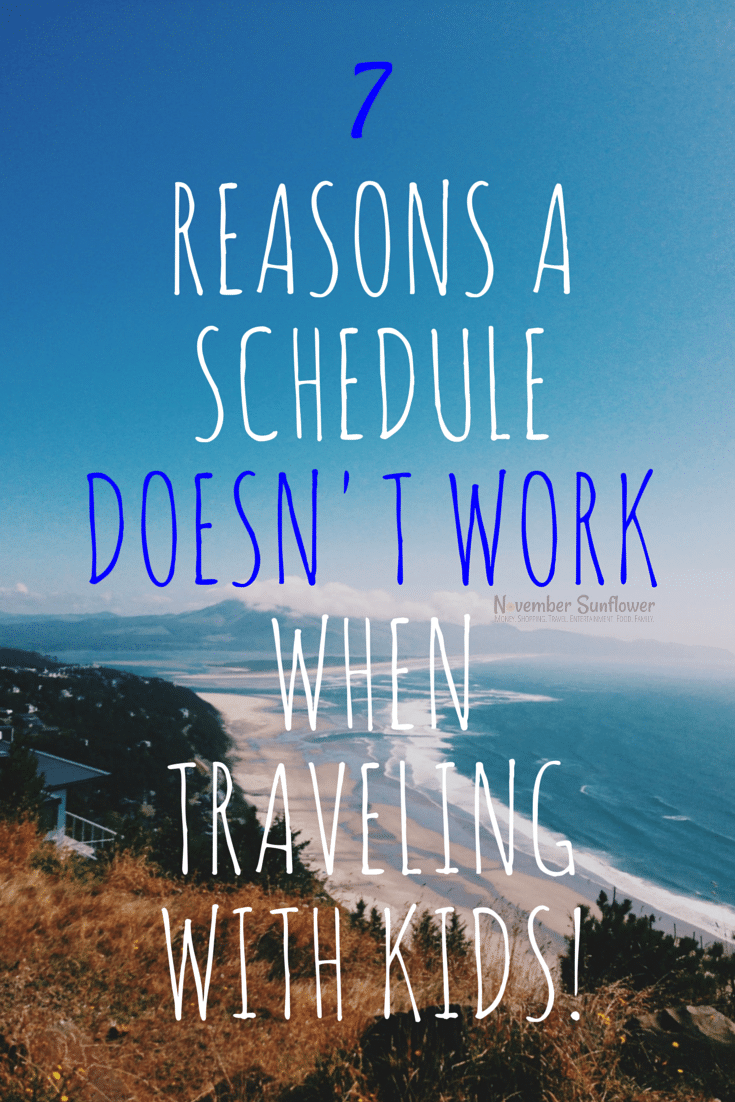 Let’s just go over why a schedule doesn’t work when traveling with kids, because everyone needs a good laugh!

Why does Mom set the alarm super early? It’s so she can get herself ready without a million questions distracting her. In her mind, she’s thinking “this’ll work out great, I’ll get myself ready, pack up a few things in the car, start some breakfast, and then get the kids up so they can get ready. It’ll be great, because I’ve put clothes out for them, and everything is all set.”

It’s laughable, as a mom, we think any of this is going to work out. The family will never leave at the time scheduled. Mom, mom, mom. Don’t you know by now, it doesn’t matter what time you wake everyone up, the kids will decide to go at a turtle walking through maple syrup pace, because it’s TOO EARLY TO BE UP.

No one remembers leaving today means we’re heading for: a fabulous vacation spot with pools, restaurants, parks, and so much more. Reminding them doesn’t help.

You either lose your mind, or just accept you’re going to leave late, and be RUNNING through the airport to make your flight. It’s just how life goes when you’re traveling with kids. Personally, I say get them all up the night before, and sleep over at the airport! Right at the gate. Perhaps that’ll convince them to listen to you on future trips!

Now, mom and family are all on the plane. Or perhaps in the car for a road trip. Maybe, just maybe, the train. Hey, if you’re super lucky, a nice cruise ship. However the transport is happening, more often than not, someone is going to suffer with motion sickness.

It doesn’t matter if you have a bag to use, it’ll still get everywhere. So, you stop. Clean up, and calm the kid down. So much for hitting a certain rest stop before the traffic starts up; oh well, kiss those those cruise ship dinner reservations goodbye; the airport bathroom is where you’ll be while your connecting flight takes off without your family; and, the train isn’t waiting around for you to get back onto it. Kiss that schedule goodbye when traveling with kids!

PS – Rides at amusement parks. Guess what? Those can cause a bit of sickness as well, even if the ride never bothered anyone before! The heat, humidity, time someone ate – those are all factors in motion sickness! Which means the schedule goes right out the window.

Long road trips are difficult. The motion sickness is one thing, but the bathroom breaks will DESTROY your schedule. If you’ve got kids in diapers, good for you. You’re golden. Kids potty-trained? Your life: forever altered whilst traveling with kids. Adults are good, we can hold our urine, like nobody’s business. We have a timeline in our heads. We know when we want to be at certain spots along the road trip, because traffic is no traveler’s friend.

Kids? They don’t care. They’re back there with their little games, gadgets, movies, and apparently, too much to drink. Kiss the schedule goodbye, because just as you’re passing the closest rest stop on the road trip travel route, your child will announce “I have to go to the bathroom RIGHT NOW.” All you can do is turn around, head for the one stop you just passed, and hope like hell you can get ahead of the traffic…..

When the kids aren’t in need of a potty break, they’ll complain they’re “STARVING.” You reach into the snack bag you packed, and realize the little brats have eaten everything. It means nothing’s left for the parents, except the raisins no one wants. WTF? Now, you’re just as hungry, because whenever your stomach knows there’s no food anywhere, it suddenly grumbles louder than a bear in your cabin looking for good eats. Stopping to eat wasn’t part of the grand schedule, because that would mean relying on a restaurant to go fast enough to get you out and back on the road before the major traffic starts. Once again, kiss that schedule goodbye, hunt for a fast food place that you can pick something up and drive, while eating. Or, bite the bullet, find a sit down place, and take your chances.

Settling arguments, well it takes a lot of time! If you don’t want to scream at the kids in front of people like a raving lunatic, guess what? You have to either find a spot away from everyone to scream, OR try to reason with two little pains in the asses who can’t seem to find the ability to get along for TWO MINUTES. Who f-ing cares which bench you sit on at the airport, just sit and shut up. “Guess what kids, because you couldn’t get along, and I had to yell at you, we’re not going have time for food before the plane boards. Enjoy your little bag of peanuts and crappy cups of apple juice.” It’s all fun, and games, when traveling with kids.

Any activities planned during a vacation? Don’t plan on arriving on time. In the same moment your foot moves over the hotel room threshold, one kids starts something with another kid, and you either have:

It is what it is, and it’s all part of traveling with kids.

Normally, I’m yelling at my kids to not run ahead of me and Mr. Sunflower. While on vacation, these two children become the slowest walkers known to man. Hey, so what if you’ve got to lug your wheely suitcase through the airport yourself, with a backpack strapped to your back. Move it. HUSTLE. We’ve got to make the connecting flight damn it. Plus, eat something before boarding the next plane. There’s not time to stop, dilly dally, or walk at a snail’s pace! When you do, we miss eating real food, and again: eating peanuts!

While at amusement parks, it’s the same issue. No one has a sense of urgency, and that means our morning is going to be less productive, with less rides, because no one hustled to get on lines to popular rides before the lines got out of control. The schedule: shot to sh*t. “Stop your whining, kids. You should’ve hustled when I told you, too. Ignore those blisters, and get a move on!

Finally, anywhere you go, these kids have attention spans of gnats. Guess what will happen all.day.long. while on vacation?

Basically, plan on chasing these little gnats around, or hunting for them after they wander off. Get to know the staff at your hotel, because more often than not, they’ll be the ones that find your kids. At least they’ll remember who the monkeys belong to! Your daily schedule to pack in as much as possible is never going to happen when traveling with kids. It’s never going to happen, so play it fast and loose, and put your kids on a leash!