Depression presents itself as anger in many of us living with depression. If you’re close enough to one of us dealing with depression, don’t get butt hurt over it. We’re just as confused as you are when we rage against the machine. 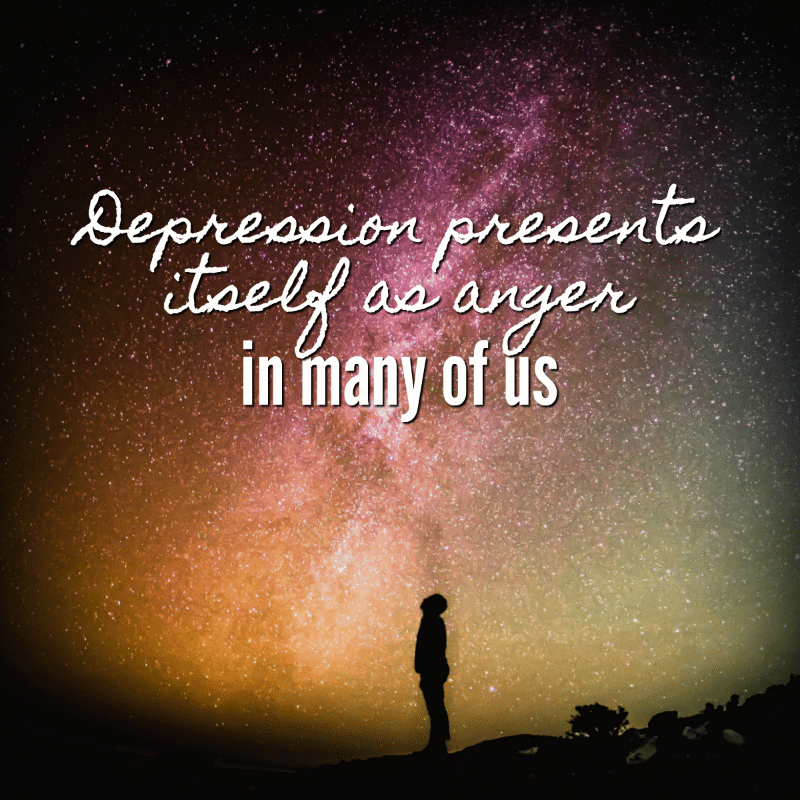 Years and years of anger issues have plagued me. As a teenager, my anger was chalked up to hormones, because you know, I’m a girl. Not one person around me ever considered my anger stemmed from depression. Why? Well, most people don’t even know depression presents itself as anger in many of us dealing with depression. It’s just not a well-known fact. Why would it be? If you’ve raised girls, you’re aware of how hormones can cause a lot of pent up rage. Seems normal for most families to have a girl lash out, for no reason.

Let me tell you, anger is ONE piece of the depression puzzle. However, it’s a large piece of my depression. It’s more than just anger. It’s all out rage, and it comes out of nowhere. Such silly, simple things set me off. I’ve always been a yeller, but at one point, it changed to all out rage. When my kids would look at me in shock, and a little fear, over how insanely pissed off I was because one of them forgot to hang their backpack in the right place….it’s more than just hormones.

Kids don’t understand mom’s outbursts. They just feared them. I’ve never hit my kids, ever. I’ve gotten shit from older family members, telling me “that’s how you discipline kids, there’s not enough spankings happening.” My kids can tell you, straight out, they have never been hit. I don’t believe violence is an answer. However, I also don’t think losing my mind, screaming, is a great discipline tactic, either.

When it became the normal routine, I knew something wasn’t right. Along with many other red flags being raised, the rage was a major one. I started to think about how I’d fly off the handle easily during my childhood, as well as my teen years, and early twenties. Simple, petty shit, would set me off.

If I had known it was a glaring sign of depression back in my younger years, I’d have been in therapy long ago. No one should have a “rage against the machine” moment over someone leaving a glass and plate on the living room table. It’s just not a normal reaction. Unfortunately, it was my normal reaction, often.

Kids don’t understand shit like that, and apologizing doesn’t help after the first 10 times it happens. Does a lot of damage, so basically my kids will probably end up in therapy, thanks to my depression. Isn’t life grand?

As an adult, if you’re my friend, you’ll have to just be able to embrace shit like this. I don’t understand my rage any more than you do, however it’s not about you, or our friendship, or relationship. Learning not to get butt hurt over my anger outbursts is important. I work towards “getting better” every damn day. I have downfalls, and I’ve set backs. I’m human, just as you are human.

Just understand, depression presents itself as anger, and though I’m doing my best to recognize it, and handle it – SHIT HAPPENS. My outburst doesn’t last long; it’s over almost as fast as it came about, so sometimes, you’ll just have to ignore the rage, wait for it to pass, and when it does pass, ask if I need to talk to someone, because that shit was out of hand.

I have friends living with depression, too. Yes, I hurt when they rage. I feel as if it’s personal. It takes a bit for me to remember it isn’t about me, but I do remember, and do my best to be there for them. It’s tricky, for sure.