When I was younger, my parents took the family to Walt Disney World in Orlando. Way back then, the park was MGM. My only memories of the park were of a Jaws ride, which was no longer in existence; and, Indian Jones Epic Stunt Spectacular. When I received the Disney Social Media Moms Celebration invitation, I looked to see if the Indiana Jones show was still around. IT WAS. I knew I had to bring the kids to the show. It was my only other goal for the trip, besides getting a Dole Whip at Magic Kingdom’s Aloha Isle. I know, I live a very boring life. I’m realizing that now….. 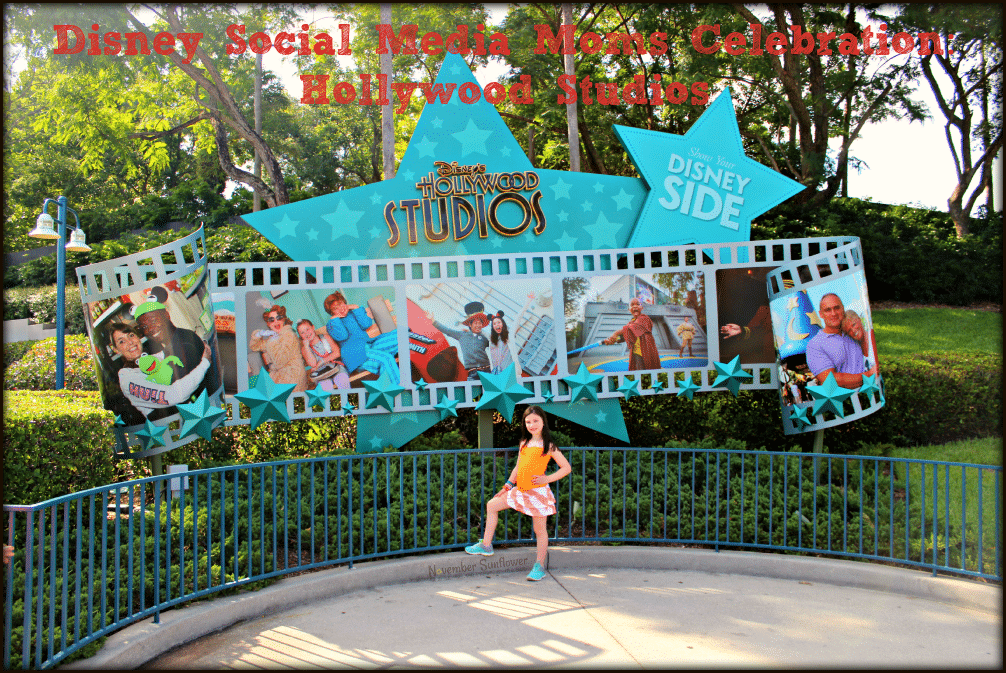 Starting the day at Magic Kingdom for our Dumbo Ride taping 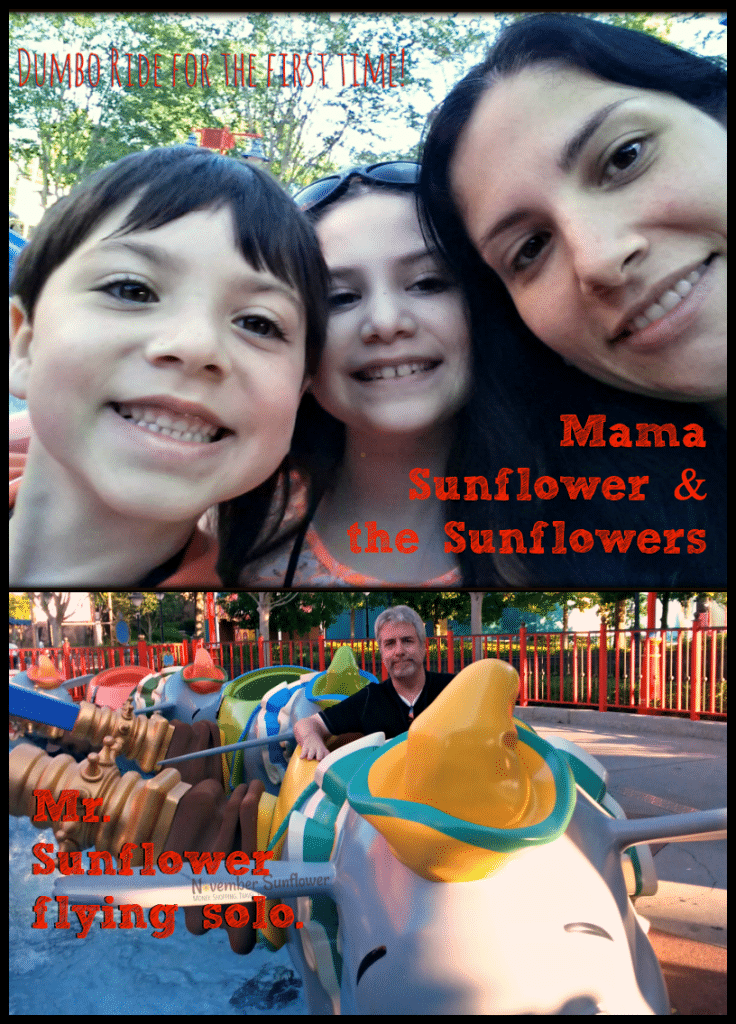 Before we could hit up Disney’s Hollywood Studios, our Saturday morning started out super early. Disney Social Media Moms Celebration gave some of us the chance to film us riding various rides. Our family filmed our Dumbo Ride. Everyone must ride the Dumbo Ride at least once in life, right?

Staying at the Yacht Club came in handy, because it’s a quick walk over to the pier to catch the ferry boat to Hollywood Studios. IN THEORY. Our itinerary included a quick stop at Epcot to get in a couple of rides, and a photo opportunity with Mickey Mouse.

The beauty of the Yacht Club: being so close to Epcot, you can walk there OR you can catch a boat to it. We decided to take the boat to Epcot. Beautiful ride on the water, and rather fast! So much nicer to take the boat than to have to worry about a bus. Let’s just say, the ferry drops off guests closer than the buses drop off at the bus stops. I see why so many people love the Yacht Club!

After Epcot, we took a boat to Hollywood Studios. Another smooth ride along the water to Hollywood Studios! We had our list of what we wanted to experience. Prior to leaving for Florida, I’d been able to score a buffet dinner at Hollywood & Vine. What’s special about this particular dinner? Well, it’s the Jedi Mickey’s Star Wars Dine. Mickey, Minnie, Donald, Goofy, Chip and Dale all dress up as Star Wars characters. TOTALLY overpriced, however, the kids having a wicked cool experience beyond the whole #DisneySMMC event: epic.

Our plan was to check out:

All to be done prior to our buffet dinner at Hollywood & Vine. Before we started hitting the things on our list, we hit up Disney Junior – Live on Stage, because why not? Who doesn’t love Sofia the First and Doc McStuffins!

We didn’t achieve it all. By the time we were through a few things on the list, we lost our chance to see the only show I wanted to see, Indian Jones! Plus, we had no time to hang with Buzz and Woody before dinner. We told The Boy we’d hook up with them after dinner, and when we returned, we could go on the ride again, too. I told Mr. Sunflower we’d have to return on a different day to see Indian Jones, OR ELSE!

After seeing the Cinderella carriage, and checking out most of the things on our list, it was Jedi Mickey dinner time. Boy, did the kids love this experience. The food was fairly good, especially those meatballs they had in the buffet. I could have sat down and eaten all of them, along with the fresh Mozzarella! The kids LOVED the desserts, especially the chocolate fountain. Of course, what they loved the most, the characters. Before sitting for dinner, Mickey takes pictures with everyone. He’s a Jedi, of course. 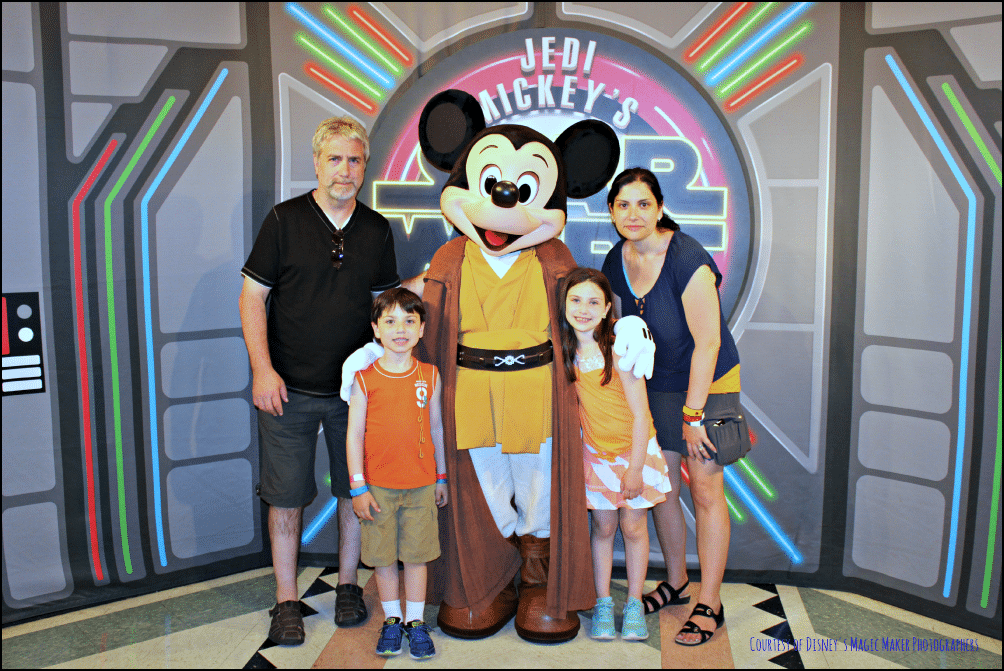 Once seated, you give your drink order, roll your place mats into Lightsabers, and then hit the buffet. We did. BIG TIME. It’s always a great idea for a buffet when I’m eating. We make all our money back on that aspect of the meal. Although, the meal was so expensive, even I couldn’t eat enough to make all of our money back. The smiles on the kids’ faces were enough to make the price tag worth it for us.

While everyone eats, the other characters come and visit each table for photos! EWOK Chip & Dale were our first guests, and the kids love them. Throughout the meal we met Darth Goofy, Stormtrooper Donald, and Princess Minnie Leia. The handler for the characters comes by to make sure every character has visited your table before your meal is over, which is a very cool aspect of the meal. I appreciated it, since we paid so much money for the dinner.

Issue with the experience

Our only issue was after we left. While we headed back to Toy Story Midway Mania! ride to get our photos with Buzz and Woody, and ride one more time, we got a phone call from the manager at Hollywood & Vine. She left me a message telling me we still owed a balance. After we finished on the ride, we headed back to Hollywood & Vine to clear up the matter. When we arrived, the characters were still there, so the kids got to spend more time with the characters, and we scored another great photo with our Magic Maker!!! 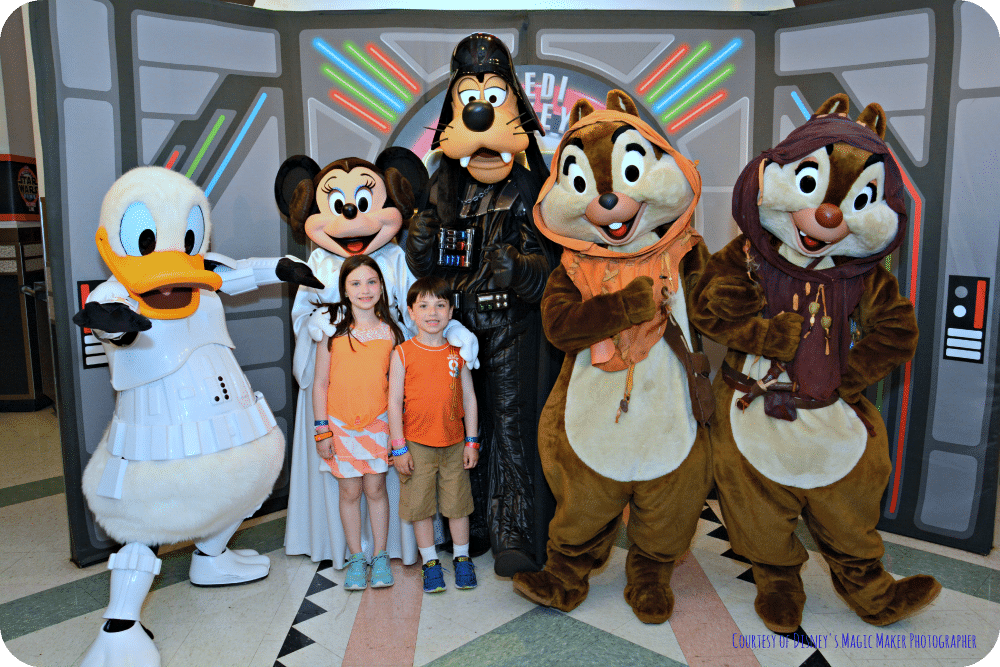 We sorted out the issue with the manager of the restaurant. She stepped up, and did the right thing. Her staff threw out the gift card after scanning it. Unfortunately, I needed the card, so I could call the number, and have the transactions on the card provided to me. She agreed. We thanked her and left.

Disney gets the “customer relations” aspect of business, for sure. The fact that she did the right thing, will only make me book another meal there in the future when I return to Orlando again! Great treatment brings the customers back. It’ll also make customers like me, share how awesome they treated us! Again, this concepts needs teaching over at the Disney Cruise Line division of Disney. Just saying….

I think our first day at Hollywood Studios was a success, look at these sleeping beauties after a full day of fun! 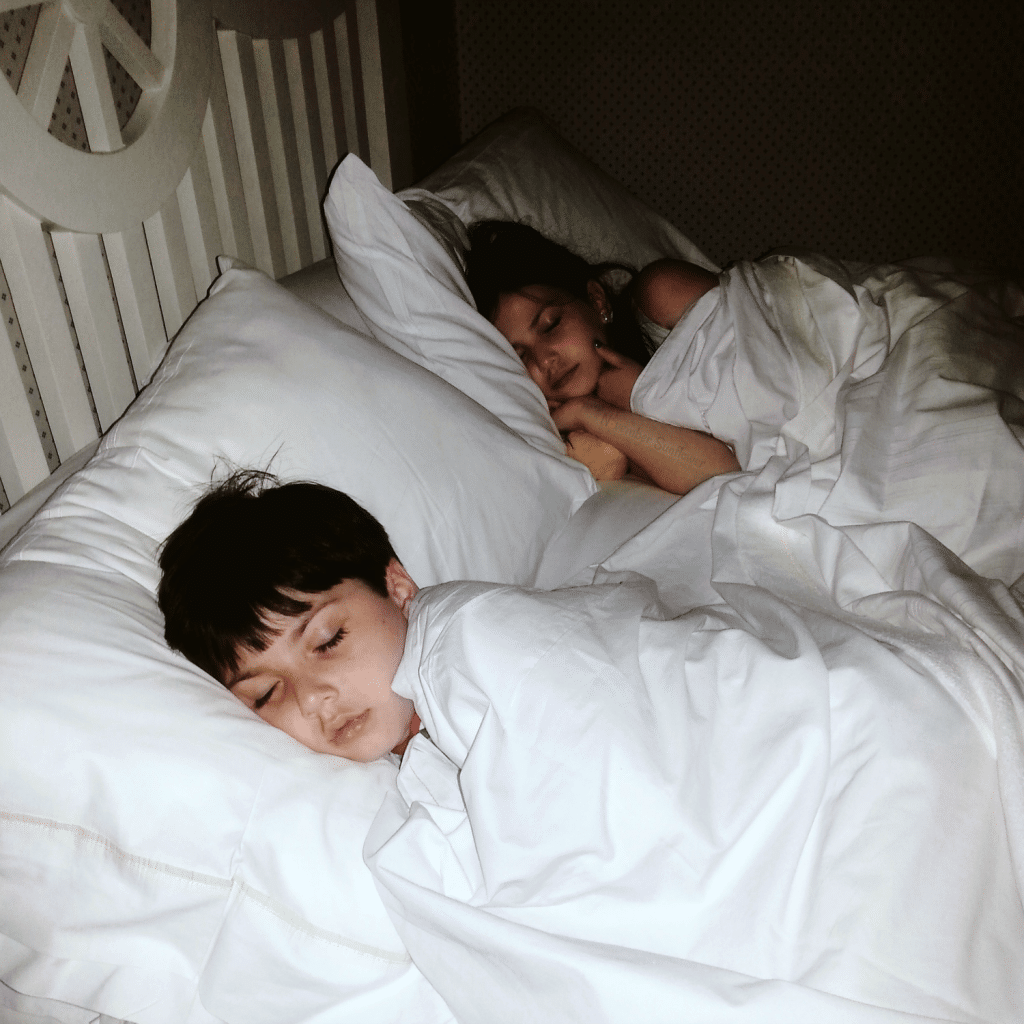 Our second round at Hollywood Studios

Since our first round at Hollywood Studios didn’t result in my viewing of Indian Jones, we returned on a different day. Disney Social Media Moms Celebration ended, and we did our first day “on our own.” It meant scheduling Fast Passes. Our choices: Star Tours, Toy Story Midway Mania! and of course, Indiana Jones! Finally, after our morning at Downtown Disney, and some pool time, we made it to Hollywood Studios to check out Indiana Jones. Perfection! It made my whole trip, no joke.

How can you not love Indiana???!!!! He’s pure awesome. Being able to hang out and do Star Tours, and another round of Toy Story Midway Mania! was fun. Plus, we walked around and hit a few other “short lines,” and we got a funnel cake on our way out to the bus stop to get back to Pop Century, since we’d moved from Yacht Club to Pop Century on Mother’s Day. The bus stop for the budget-friendly hotels are kind of far from the entrance. Bummer, but what can you do? You’re at Disney! Just smile and enjoy.

And that’s a wrap on Hollywood Studios for this #DisneySMMC trip! Tomorrow is Animal Kingdom, followed by pool time and me packing up to leave. It will be sad to leave. Blessed to have been asked to attend the 2015 celebration! #Disneyworld #disneyside A photo posted by Staci (@novsunflower) on May 11, 2015 at 8:14pm PDT

Tips from a newbie at Hollywood Studios

I’m all new to Disney travel, so my tips are basic. I’m still learning. Here’s what I learned from our time at Hollywood Studios: