Fat removal without surgery achieved by freezing fat cells. I know what you’re thinking, she has lost her mind. First she went and heated up her fat cells, so they’d shrink, without surgery. Now she’s freezing them off? What’s gotten into November Sunflower? Well, I’ll tell you. I turned 40 in April, and I’m tired of working out and seeing my abs covered up by my fatty stomach. 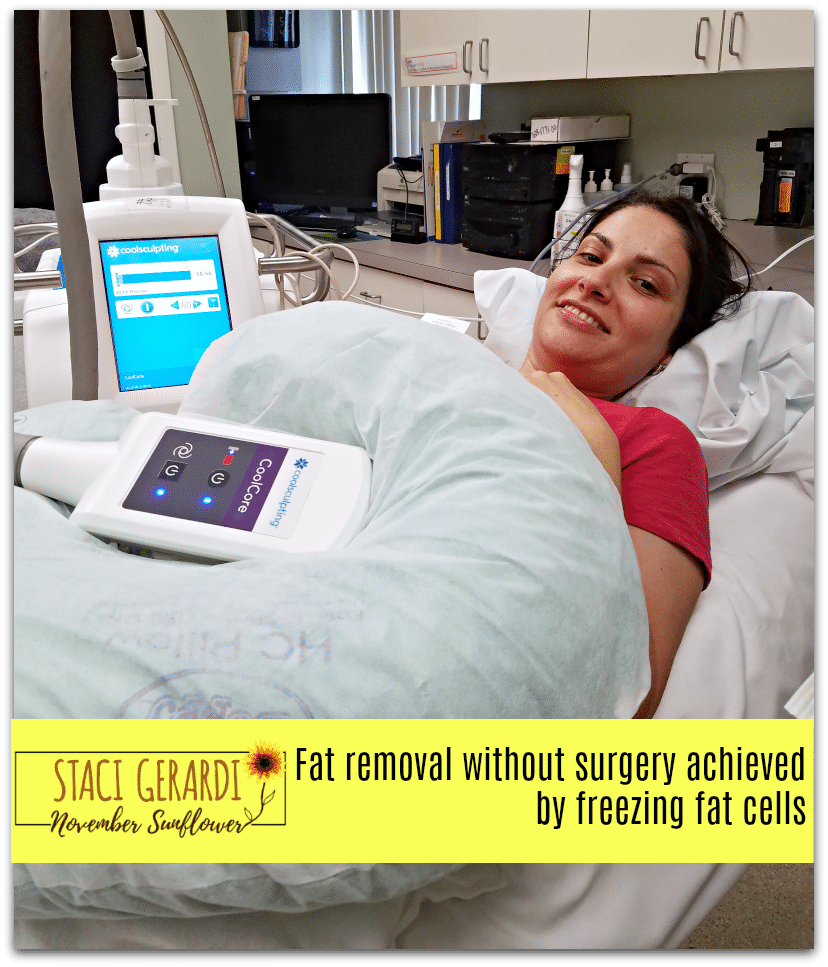 So, what in the world does it even mean to have fat removed without surgery? Well, for me, it means freezing the fat cells with a procedure called CoolSculpting. Earlier in the year, I started doing a temporary fat reduction procedure. It helped tighten up my skin, and decrease my stretch marks, but the fat reduction wasn’t as great as I’d hoped for. Instead of ignoring my disappointment, the team at Dr. Rafal’s office suggested I try CoolSculpting.

Skeptical at first, I let them explain the process to me without being a negative nelly. It was all new to me, as I’d never ventured into any of these types of procedures, because I’d always been told if I wanted the problem fixed, I’d have to get liposuction and a tummy tuck. So not for me. Only surgery I’m interested is a breast reduction, and lift. Nothing else!

So, what’s CoolSculpting? Let me do my best to explain.

CoolSculpting: what is it?

It’s a procedure that removes fat permanently, which requires NO surgery, and NO downtime. The only time commitment is the hour it takes for the treatment. Basically, an applicator is placed on the area of fat you want to target, and kill. It stays there for an hour, at least it’s an hour at Dr. Rafal’s office. After the hour is up, the applicator is removed, the nurse massages the frozen fat blob (my term, that’s not a technical term at all,) and you’re off.

How to prepare for CoolSculpting

Dr. Rafal’s nurses will give you a consultation. They draw on your body, pick out the right applicators for the job at hand, go over the different things that might occur after the procedure, and what it feels like during the treatments. You sign some stuff, and put your initials on other stuff. Everything is explained to you, and gone over at length, so you know exactly what you’re getting into. 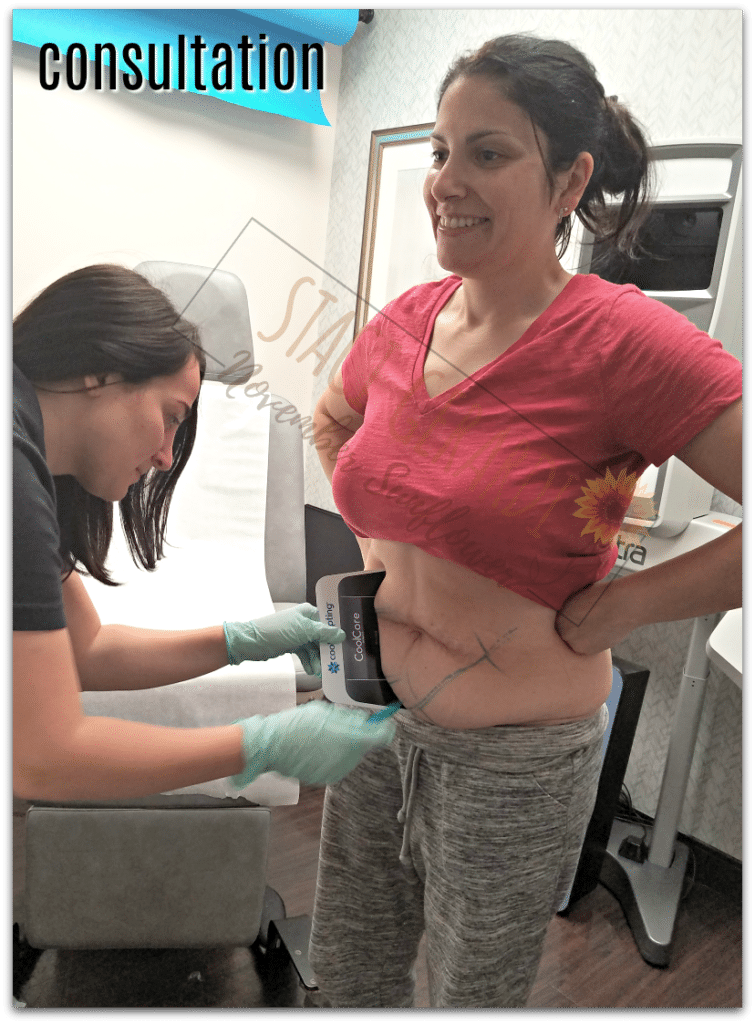 After the consultation, when you have your appointment, there’s not much to prepare for with CoolSculpting. Just wear comfy clothes, because you’ll be sitting there for an hour. If you want to bring something to do to pass the time, that works. Other than that, there’s not much to it. No need to use anything special to wash with, or treat the areas you’re having fat frozen off. It’s as simple as showing up, wearing comfortable clothing, and having something to pass the time if you don’t want to watch TV on the big screen at Dr. Rafal’s office!

Now, I’ll put it bluntly. It feels rather odd to get CoolSculpting. Being drawn on is the least of the strangeness. Having photos taken, also not all the odd. The worst part is the ice cold cloth placed on your body part being sculpted. It feels like a sheet of ice being placed on your skin, but then the applicator goes on top of it, your skin is sucked into this applicator, and the spot goes numb. No pain. Just a strange suction feeling as your skin gets pulled up into the applicator, and then numb. 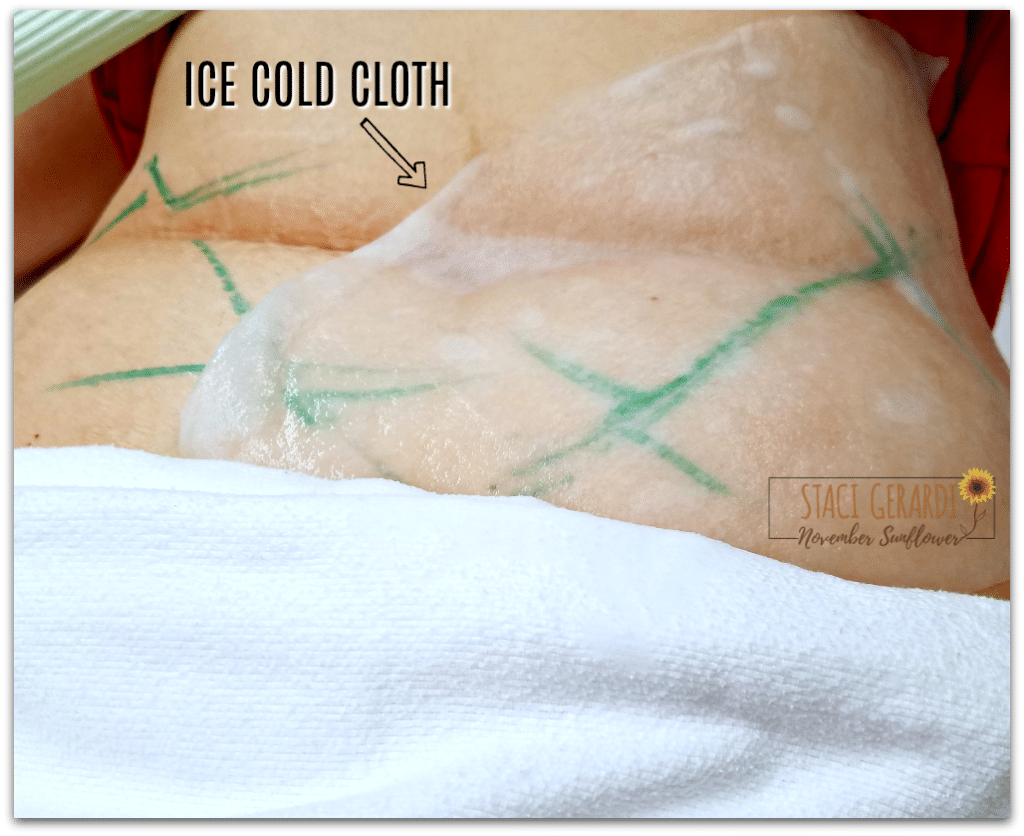 Personally, I watched television and got work done on my smartphone. Caught up on a little social media work, and some emails, while my fat removal without surgery was happening right in front of my eyes!

Throughout the treatment, I was given water, and if I wanted, snacks. I had someone checking on me throughout the hour.

Once the treatment ends

Once the hour is over, the little applicator is removed and you’re looking at a strange, frozen lump in the shape of the applicator. Your nurse massages it, and it flattens, and all you’re left with is a little redness which goes away quickly. You get cleaned off, and off you go. Back to life as you know it, and wait for the results to kick in.

Some people start to see results in 30 days, others it takes the full 90 days to see results. There’s also a chance another treatment will have to be done, to get the ultimate desired results. Nothing is perfect.

During the days following the treatment, my belly was numb for a good two weeks. Not to the point I couldn’t feel anything, but it was definitely a weird numb feeling. I also had a bit of nerve pain. Nothing crazy. Just a little zippity zap feeling once in a while. It’s all normal, as you’re body is adjusting to what has just happened.

All-in-all, I’m hopeful this will be the smoking gun that gets rid of this stubborn belly fat that no amount of exercise was taming!