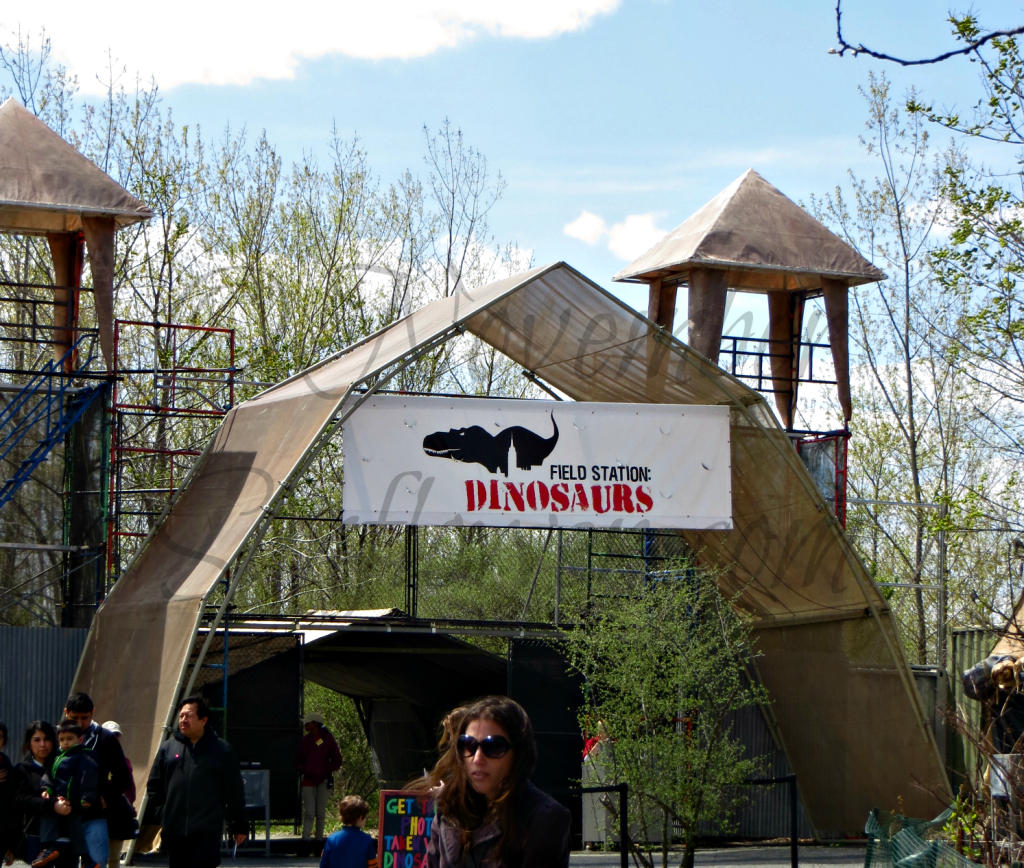 “Wow. T-Rex acts a lot like Bailey.” A direct quote from The Boy while watching the Dragons to Dinosaurs show at Field Station: Dinosaurs Outback Steakhouse Ampitheater. Who is Bailey? My parents’ Chocolate Lab. He’s big, he’s mischievous, he’s about 5, or 6 years old. The only difference between the T-Rex in the show, and Bailey, is that one’s a Dinosaur, and one’s a Chocolate Lab. My son hit it right on the head with that fine observation! Although, Bailey never tried to eat a kid……you’ll have to see the show to find out what I mean! 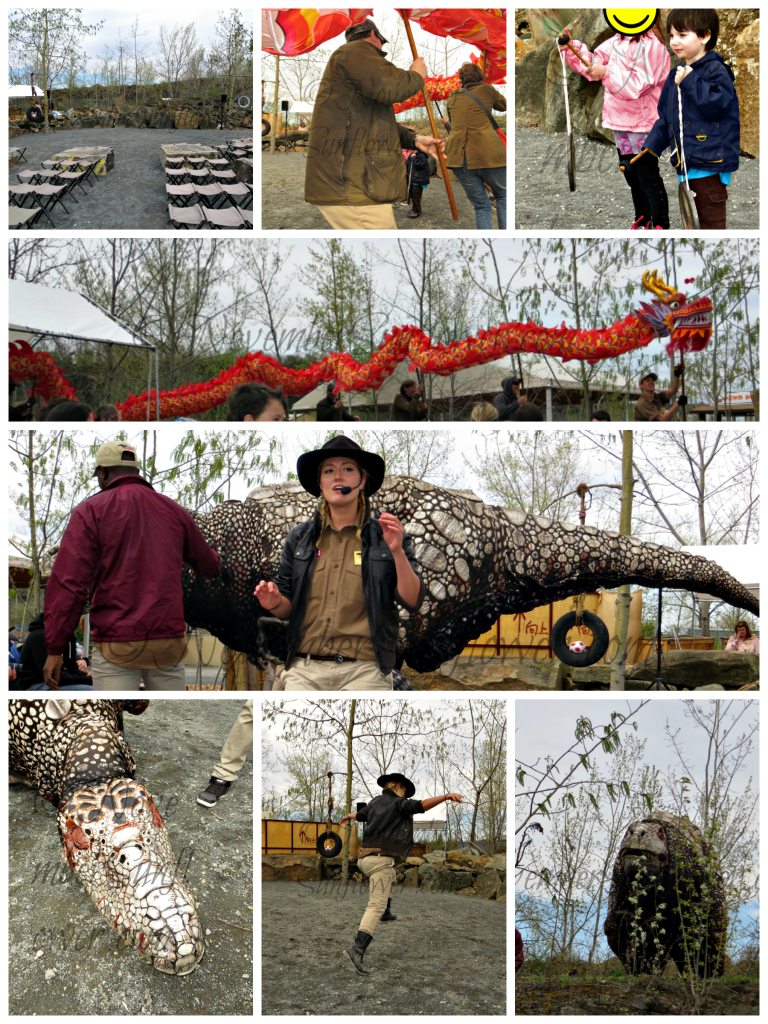 Our park experience truly began the moment we got our Commander’s Passes thanks to the phenomenal staff. Every last person working at Field Station: Dinosaur’s made the kids feel welcome, asked about their favorite dinosaurs, and explained our map, and the schedule in a kid friendly manner. I appreciated that they took the time to speak DIRECTLY to my kids, as the park is really about giving kids a fantastic, yet educational, Dino experience. 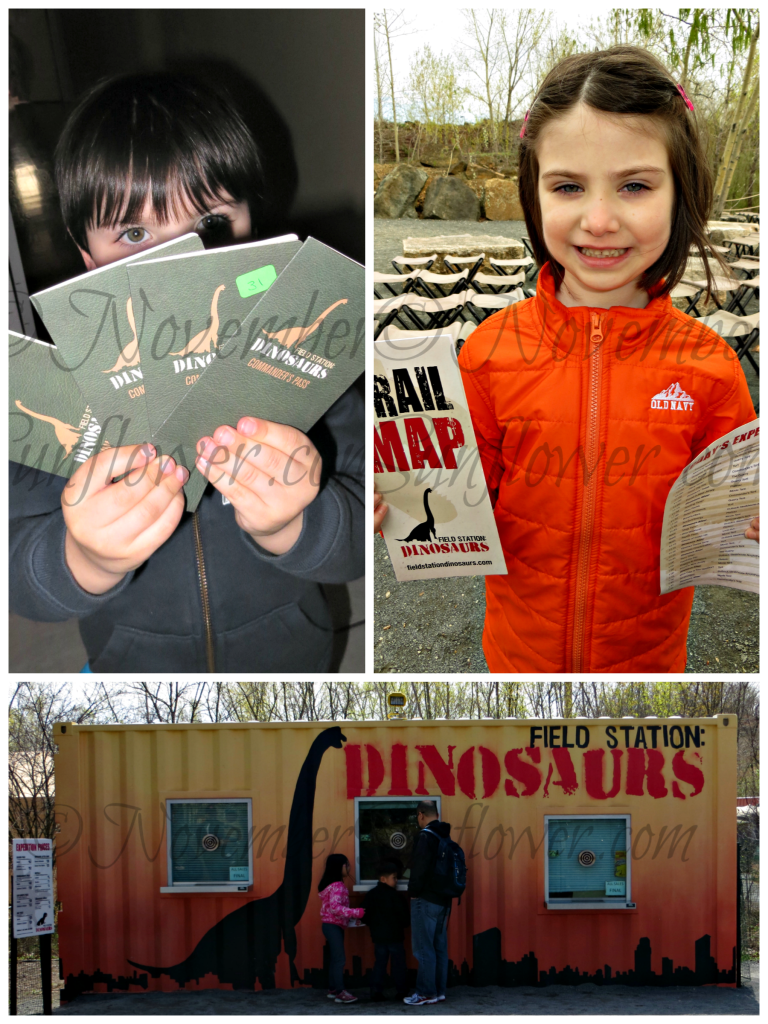 We’ve been to other parks, and exhibits, with the kids. All of them meant for kids to learn, and be entertained. I have NEVER had a more knowledgeable crew at a park like this. The depth of their dinosaur expertise floored me. Whether chatting about dinosaur poop fossils, or teaching the kids about what the dinosaurs ate “back in the day,” every last member of the team knew their stuff, and had unmatched enthusiasm. Brendan, in particular, was fantastic with the kids, and his factoids. 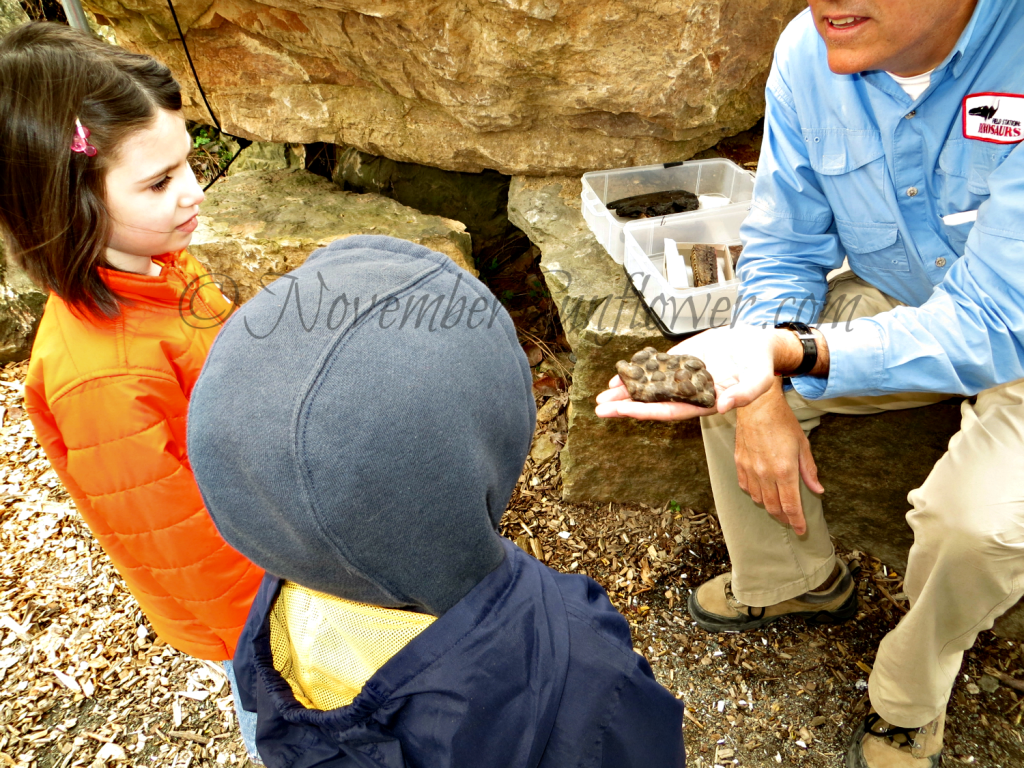 During “feeding time” in the Commander’s Tent, which is only available to those with season passes, or Commander’s Passes, my son told Brendan he knew he had been the one dressed up in the T-Rex during the Dragons to Dinosaurs show. Nothing gets by my kid, and Brendan didn’t miss a step. He went right on to explain how great it is to be able to teach kids by showing them amazing dinosaurs through puppetry. BRILLIANT! Now, if you’re wondering about feeding time, no it’s not the chance to feed your kids to dinosaurs….but wouldn’t that be interesting…..nooooo, it’s a time where kids can learn about baby dinosaurs, and feed puppets that actually look like baby dinosaurs. The handlers control the babies, and allow the kids to feed them with little “doll” bottles, while they teach the kids all about what dinosaurs would have eaten when they were alive, roaming the Earth. Kids LOVED it. Granted, they were the only two there, but even if a few kids were there, it would be a lot of fun. 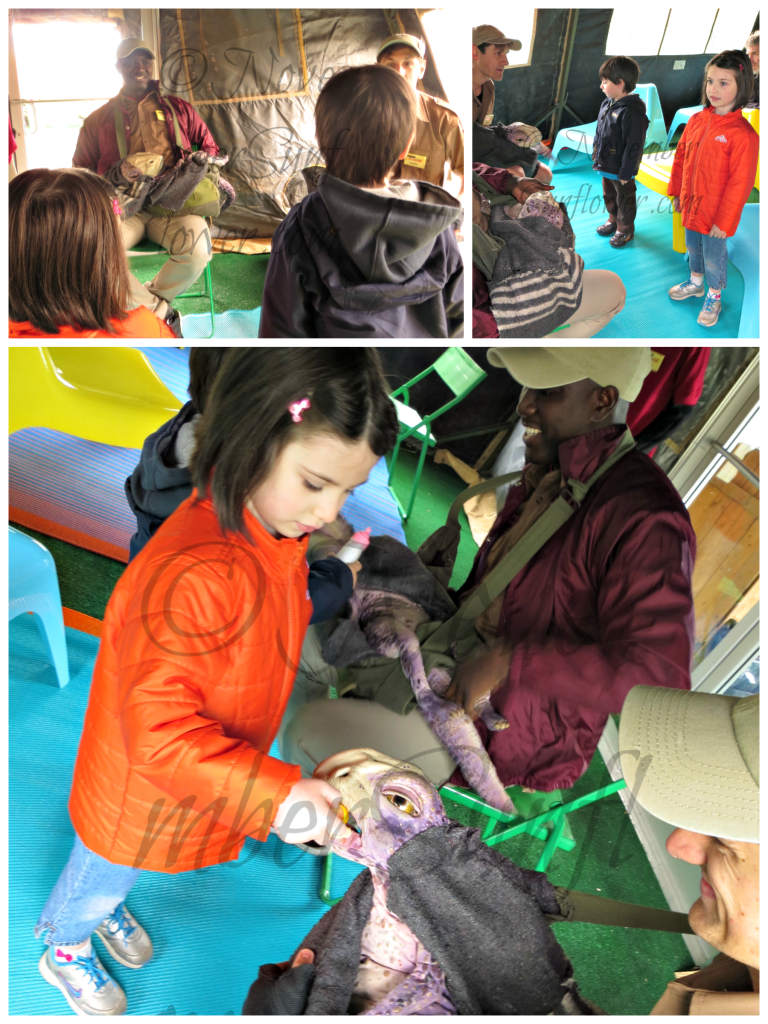 The day we went, it was a bit overcast, a bit windy, and a tad bit cold. We were there when the place opened at 10am, so not a lot of people were there for the first few “scheduled expeditions.” Our kids got a lot of personal attention. Totally awesome. Glad we were able to go to the Commander’s Tent, too. Kept the wind off of us for a bit, and in the Summer, the AC will be heaven! The scheduled activities in there are things like the feeding time, and story time, but you can also just head in there to sit, relax, and have the kids play for a bit.

Dancing, coloring, building with blocks, and watching movies are all things my kids love to do. Just so happens, at Field Station: Dinosaurs, the kids can do all of these things in the midst of the dinosaur trails…….If you’ve got a Commander’s Pass ($40/adult; $35/child; under 2 years old is free,) or an Explorer’s Pass ($28/adult; $23/child; under 2 years old is free,) you can watch a 3D movie about Dinosaurs for no extra charge. If not, there’s a small fee of $5.00. If you like Discovery Channel type shows, you’ll love this short movie. If not, pass on it. There’s even a great Season Pass option, which if you live close to the park, would be a worthwhile investment! It’ll run you $62 for adults, and $52 for the kids. 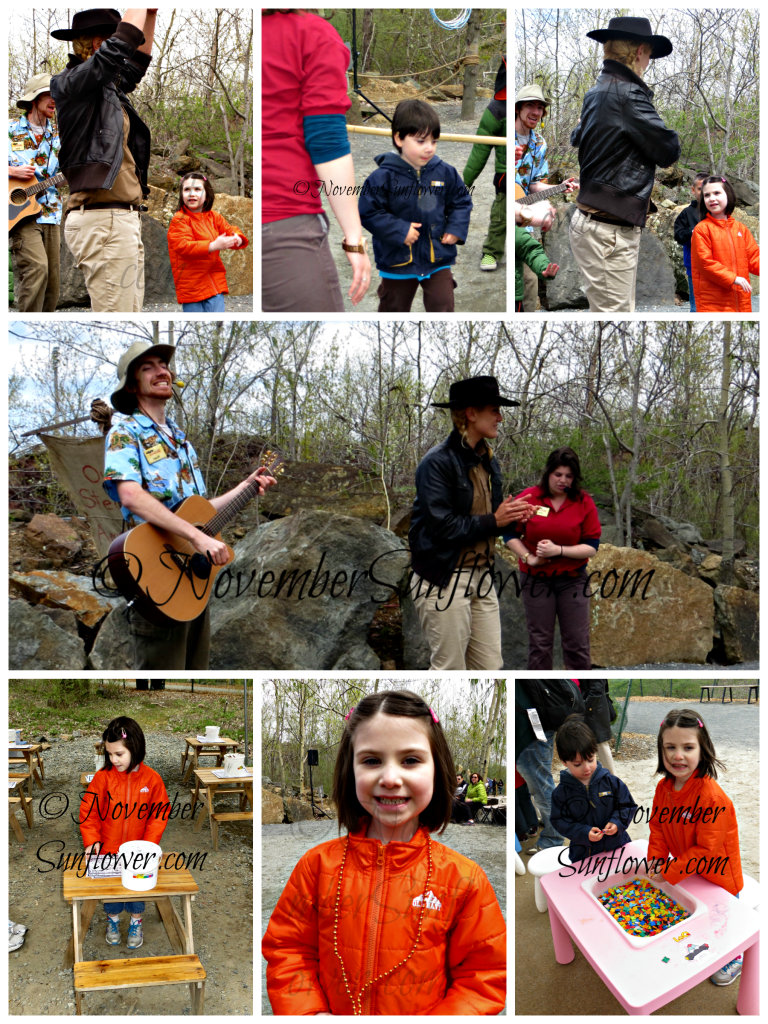 Food…….it’s something my son is always thinking about. He is my son, of course. He wasn’t interested in hot dogs, or burgers. All he wanted was a big, soft pretzel, like the ones at the street vendors in NYC. My husband loves them, and so does my daughter, so that’s what they got to munch on. It was too cold for Italian Ices! If you don’t want to buy, you can bring your lunch into the park. They just ask you to eat at the designated food area, which is covered, and has a ton of tables to sit at. It’s also on the way to the Fossil Dig Site! Personally, we did all the fun stuff, grabbed pretzels, and on the drive home the kids ate lunch. 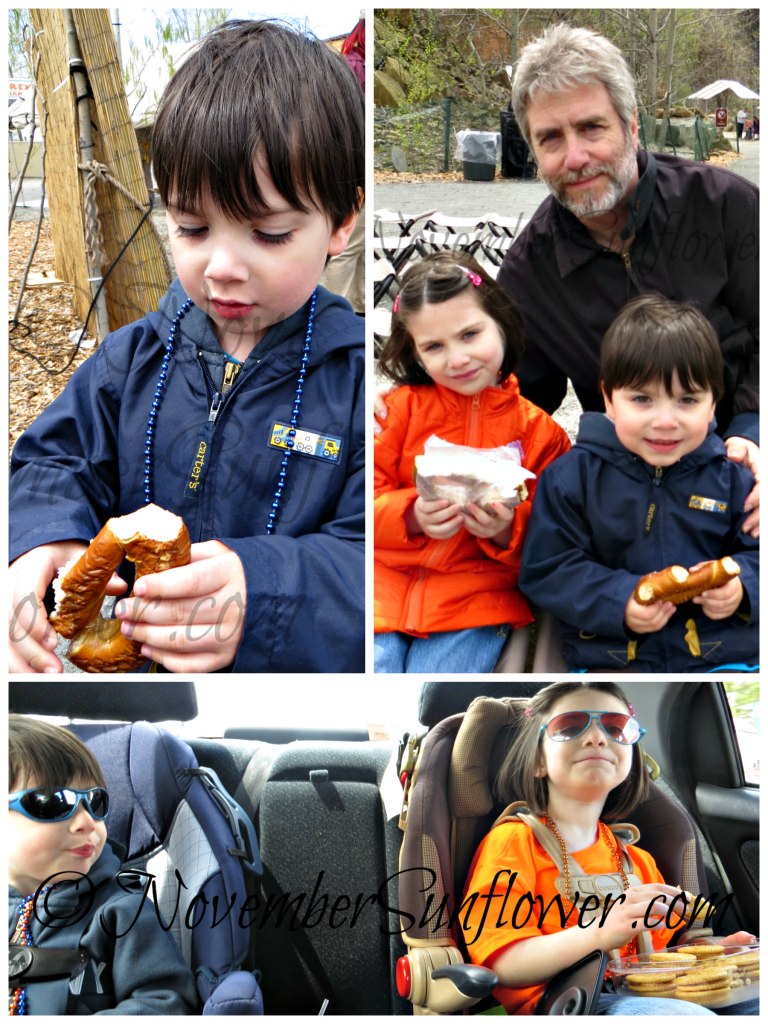 Oh, the dig site. They provide shovels, brushes, and lots of buried fossils! The kids loved digging for the fossils, and ever so gently brushing them off, like pros. Very cute, but honestly, once you’ve done it, it’ll lose a lot of its allure, since they kind of just cover the fossils back up, so kids can dig again later in the day. There’s scheduled dig times on the daily expedition list. Super cute, though. 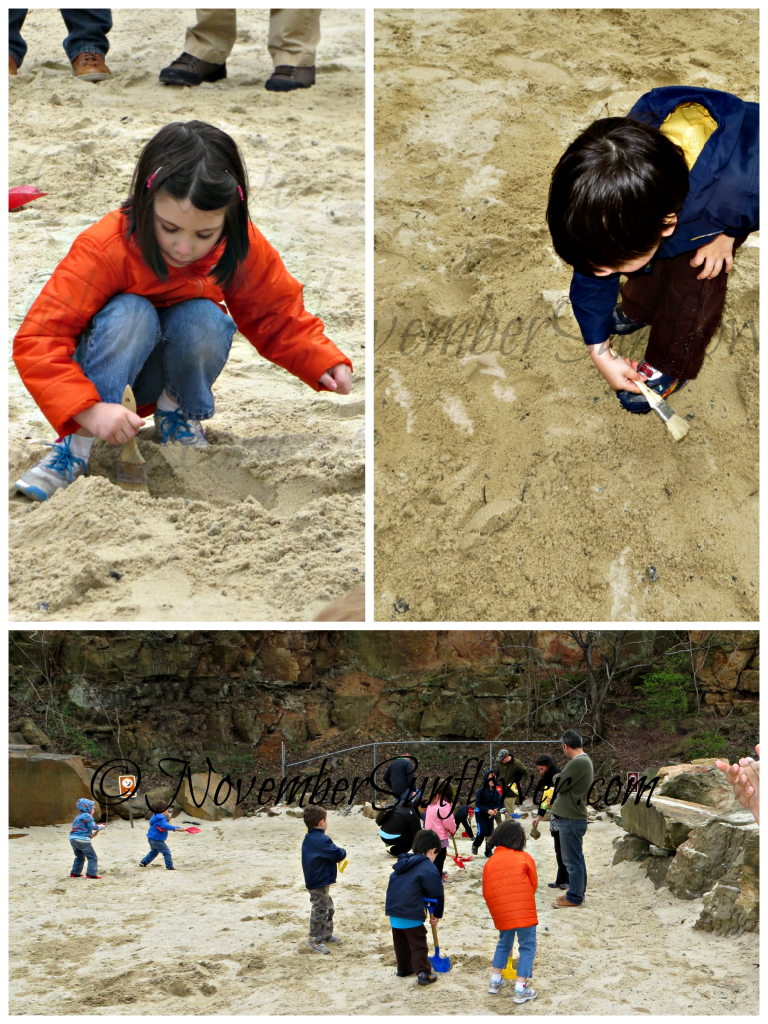 So there’s food, dancing, blocks, coloring, shows, games to participate in, a movie, digging for fossils, and a ton more activities. However, what’s the most important piece of this trip I’m forgetting? Oh, that’s right, animatronic dinosaurs!!!!! Once you enter the park’s trails, you’re thrust into a “real” field station, with dinosaurs that MOVE, and make noises. Nestled in between all the dinosaurs are a little geologist outpost, ornithologist outpost, environmental scientist outpost, and pick-up truck with some baby Dinos in the back. Or really small adult Dinos. Plus, a Yurt. 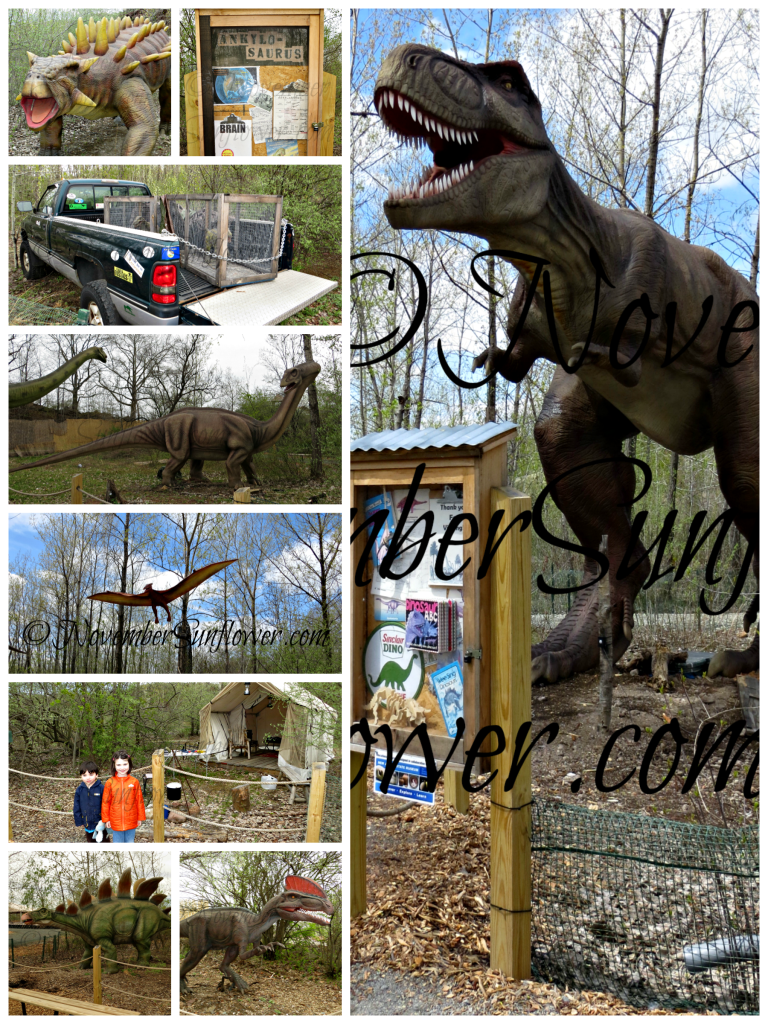 When you’ve visited each activity, such as the Outback Amphitheater for a show, or the digging site to dig, you get your pass stamped. Once you’ve got 6 stamps, you can get a sticker claiming you a Paleontologist. My children were obsessed with getting stamps, so they could get those stickers in their pass books! Very cute.

If you’ve got a stroller, no worries. Trails are fantastic for strollers, and wheel chairs. Handicap accessible portable potty, too. All the potties are the portable kind, but super clean, and are ones with stalls, and a sink. If you’re worried about changing a diaper for your child, there’s a spot to do that, as well. A whole spot right over near where you can buy popcorn!

The creator of the park got it right with this one, it even has perfect product placement for Outback Steakhouse, Coleman tents, and LaQ blocks. BRILLIANT!

Disclaimer: My family, and I, were invited to the Field Station: Dinosaurs park in Secaucus, New Jersey. After getting over the fact I’d have to drive to Jersey, I embraced the chance to bring the kids to the park. We received four Commander’s Passes. If you go, I recommend getting these passes. They get you into story time, feeding time, and on a hot day, that AC is going to feel very good in the Commander’s Tent! All opinions are 100% mine, and the opinions of my husband, and two kids.