Freeze stubborn fat cells, instead of going under the knife, to contour your body. CoolSculpting: minimal discomfort, done in an office. Even better, if you live on Long Island, you can get it done at the Center for Aesthetic Dermatology & Cosmetic Surgery in Suffolk County! 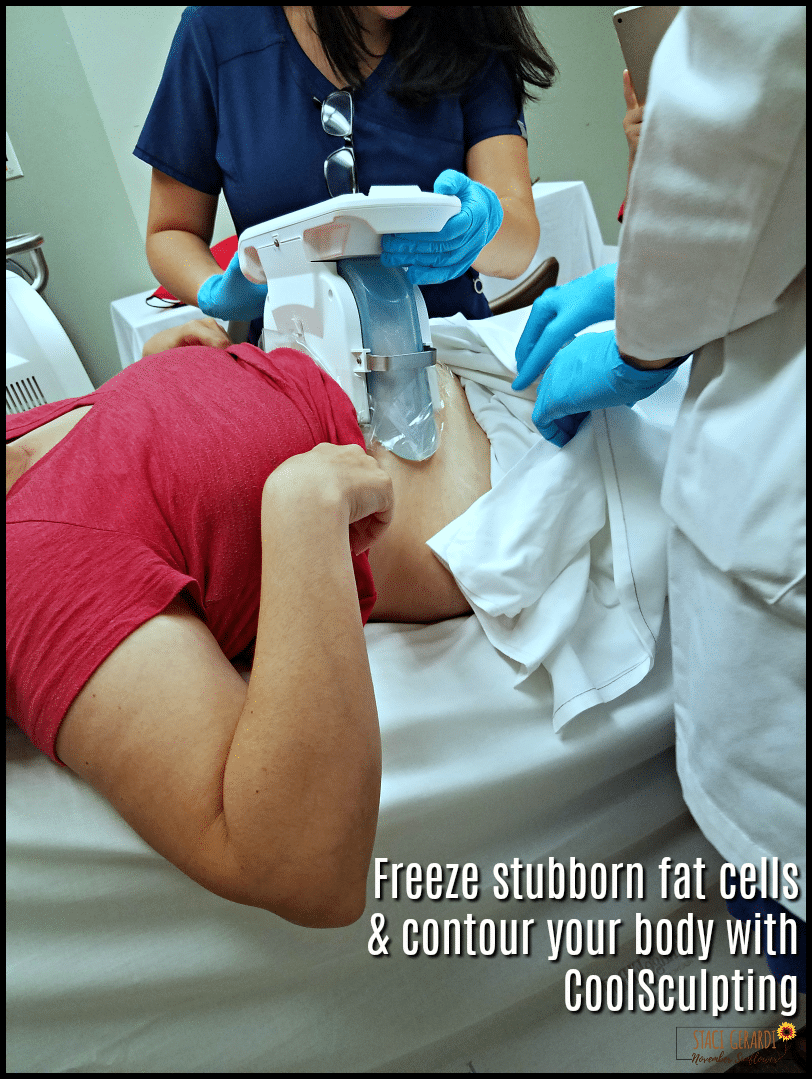 Months ago, Nurse Lauren mentioned CoolSculpting to help with some of my problem areas. My immediate response was to make a face, and tell her it was crazy talk. I’d started seeing Dr. Rafal in order to receive THERMIsmooth® body treatments. Even though it helped tighten up the skin, making it less crepe-like, it didn’t shrink my fat cells in a significant way. Disappointing, sure. However, it’s always a risk when trying something new!

In order to try to increase my results, I figured giving CoolSculpting a try, might be the best way to battle the stubborn fat cells that had set up shop in my mid-section. No amount of crunches, sit-up, or planks, was making a dent in my belly. Frustrating, after spending so much time, and energy, in losing weight. Turning 40 years of age in April, my chances of getting my stubborn fat cells under control.

However, having surgery requiring me to have fat sucked out of my body…. not happening. What else was left? Well, freezing fat cells, of course.

Contour your body with CoolSculpting

Surgery opens up a whole plethora of issues, plus a ton of down time. Being a mom to two extremely active children, and owning my own business, means down time isn’t a possibility. CoolSculpting allows me to do treatments in one hour sessions, in an office right on Long Island. Contour your body in an hour? Well, kind of. The sessions take one hour, but the results show up at a later time.

When the results start to show truly is dependent on your body. All the treatments promise is the freezing of the fat cells. It’s up to your body to rid them from your body, and start to show the contouring. Personally, my results started to show about 30 days after my first set of treatments. The reason I noticed it working? My belly flap sitting above my belly button was clearly overpowering my lower abdomen, where the CoolSculpting treatments were done.

What happened during my final office visit for the CoolSculpting treatment

Since the treatment was done on a spot right below my ribs, it took two tries to get it positioned correctly. Our first try didn’t sit right, and didn’t suck up much of the problem area. It had to be taken off, and repositioned. On the second attempt, it was painful until the numbness took over. It took about 5 minutes to feel no pain, just awkward. A pillow helped relieve the awkward pulling feeling, because honestly, this machine sucks you into it like a vacuum! It’s just all strange.

After the treatment ends, at least this final treatment, the massaging of my belly flap from the “pat of butter” looking thing removed from the machine, to flat again – was a little more painful. I suspect it was due to the location of the treatment, right below my ribs.

I won’t lie, it doesn’t hurt, but this time around, I was itchy as hell. I also had the familiar sharp pains once in a while, but the itching. No matter what I did to relieve the itching, it wouldn’t stop. Plus, many of my clothing sits right where the treatment took place. It drove me nuts, but it only lasted about 3 days. Itching decreased, and only occurs once in a while. It’ll disappear soon enough.

As the weeks go by, we’ll see how the results go. I’m told the full results can take up to 6 months to show, but I’m hoping the results show up after 90 days like the majority of CoolSculpting patients.

Keep checking back for updates each month!