September. Personally, it’s the most difficult month each year. Many changes occur in September. Handling multiple life changes when living with depression isn’t a smooth transition. As luck would have it, and I’m sure I’m not alone, I live with not only major depression, but also situational depression. Another fun bonus: I also live with seasonal affective disorder (SAD.) Throw in a bit of anxiety to the mix, and September is easily the month I struggle the most. 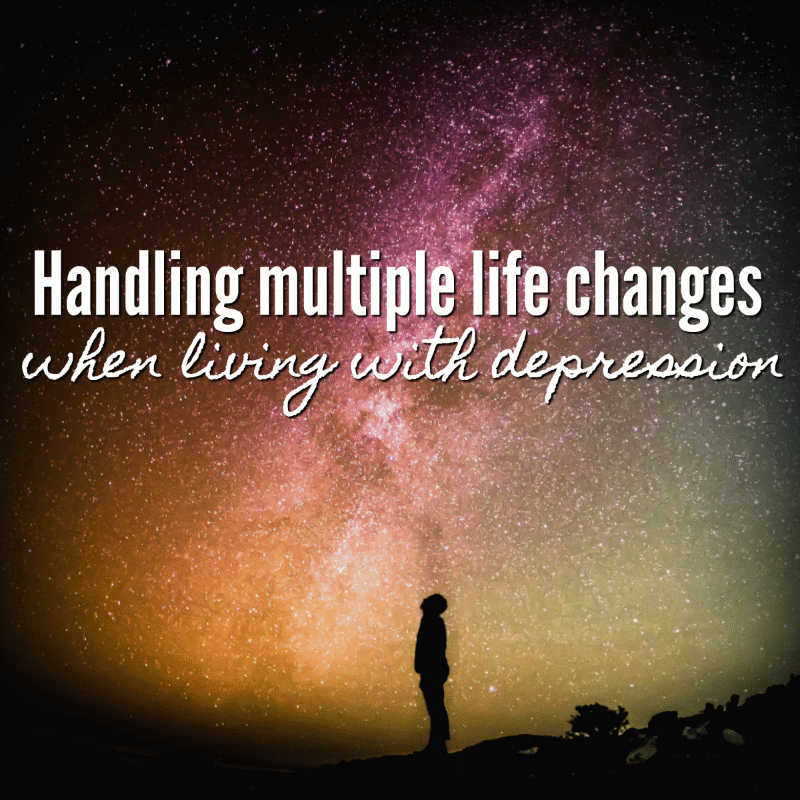 Just because I smile

Just because I smile, it doesn’t mean I’m not dealing with depression. It’s just easier to slap a smile on, and not share my personal stuff during superficial conversations during the course of my day. More often than not, I keep my head down, and check emails and messages while picking up my son at school. It serves two purposes: people leave me the hell alone, as well as, allowing me to do a small amount of work during a time I’m WAITING.

On the rare times I pick my head up, and smile to acknowledge you’re speaking to me, doesn’t mean I want to interact with you. It’s just me trying to conserve my energy for my kids, along with not being rude. Putting on “an act” for people isn’t important to me. If people don’t know me, and are offended by my behavior, oh well. What I need to do, in order to be more present for my children, once school let’s out, is far more important to me, than fellow parents assuming I’m not friendly.

Just because I smile, it’s my cordial way of acknowledging your presence, without having to deal with outside bullshit energy messing up my afternoon. It doesn’t mean I’m any less depressed.

Summer vacation ends. Kids return to school. Schedules change. Activities. Sports. Clubs. Life changes for all of us once the first day of school hits. Daylight hours are lessening. Season is changing from warm temperatures, into the strangeness of September. Mornings are chilly, days are warm, and nights are chilly. It causes insane shit to happen to my body, and my brain.

Everything happens at one time. It’s not a slow roll into a new schedule, or the crazy seasonal changes. Boom. September hits, forcing every depression I live with, into hyper speed. Major depression I live with every day. Season affective disorder rears its ugly head, along with situational depression. Although, this year, situational depression isn’t a factor. No NEW life changes are taking place this September. However, last September, this wasn’t the case. I’m lucky this year, I suppose.

Anxiety, though. It’s there.

Tips on handling multiple life changes if you live with depression

Sunshine. It helps. Sounds crazy, but going outside throughout the day helps. I don’t know the science behind it, I just know it works. I remember someone telling me a lack of Vitamin D causes your brain to malfunction. Perhaps this is true, because if I don’t get outside a few times a day to take in some sunshine, I’m drained by nightfall. Drained to the point I’m unable to form complete sentences. I stumble through every conversation. I can’t find my words.

It frustrates me to the point I just start yelling, because that’s how I handle my frustration. I yell at everyone. Mature? No. However, it’s out of my control IF I don’t get outside throughout the day. It’s taken me a long time to figure this issue out, and now I know: Staci go outside, Staci better at life.

When people start bitching about life; a husband; their kids; teachers; work; or, look miserable: I move as far away from them as I possibly can. It’s hard enough for me to get out of my own negative thoughts. As someone who is an empath, I take on energy from others, without wanting to. My biggest tip for anyone who not only lives with depression, but is also an empath, DO NOT GET TANGLED in negative people, or energy.

Politely excuse yourself from any bitch sessions, and relocate yourself in a more positive space. If you can’t, try to change the topic, or crack some jokes, so the negative cloud hanging over your head, lifts. Don’t get sucked in. It’ll stay with you for far longer than it’ll stay with those spewing the negative crap into your world.

I’m not a lover of exercise. Going to a gym is the last thing on my list of things I want to do. It’s at the tippy top of the places I NEVER wish to go to. However, I do get outside to move my body. I walk. I’ve been dog walking for close to a year now, and it’s a great chance to spend time hanging with dogs I love, as well as get my body moving. It’s some science thing about endorphins. Feel good brain chemicals help lessen depression. Exercise doesn’t remove depression completely, but rather ease the depression.

It helps reduce immune system chemicals that increase depression, too. Plus, keeps your heart healthier, too. Improves energy, which helps handle more shit thrown at you on a daily basis.

Simple advice. Take a minute. Step away, collect yourself. Breathe. Center yourself, and don’t allow yourself to be in your own head. No explanations to anyone are necessary. Let people know you’re taking a minute away. Take all the minutes necessary. People can wait. If they can’t, oh well. Do not allow the urgency someone else owns, to become the urgency to become yours. Simple concept many of us forget, which leads to anxiety, and ultimately, depression. At least, it does for me.

I’m all about telling people I need a minute, and I’ll return when I’m ready and only when I’m ready. Don’t push your shit on me. I’ve my own shit to handle!

Don’t be afraid to say no.

I learned to say no to people at a young age. If I didn’t want to do something, I simply said no. I never offered a reason, and I still don’t. When I don’t have time to help someone, I simply tell them sorry, but I can’t help at this time. What I needed to learn was the fine art of saying no to being everyone’s “rock.”

Unless I’m feeling strong, I won’t let friends, family, or anyone, rely on me for a vent session. I no longer say yes to doing a ton of shit for other people, because I found when I needed something, no one helped me. I learned to say no to the “give more than I receive” mentality. It never served me well, and drained me. I suffered, which meant, my kids suffered.

People thought I said no a lot before I figured a few things out, but man, have they been surprised with how much more I say no to them, NOW. Oh well.