Milton Hershey had a vision

Milton Hershey had a vision. It wasn’t all about the dollar, and it wasn’t just about making chocolate for the “everyday man.” Sometimes when you see the high prices of The Hotel Hershey, you wonder “where does all this money go? Into the hands of some corporation, and those that run it?” Yes, some of it does. Running a hotel as beautiful as The Hotel Hershey requires money. However, Milton Hershey had a vision, and it wasn’t dollar signs, and rolling around in piles of cash. 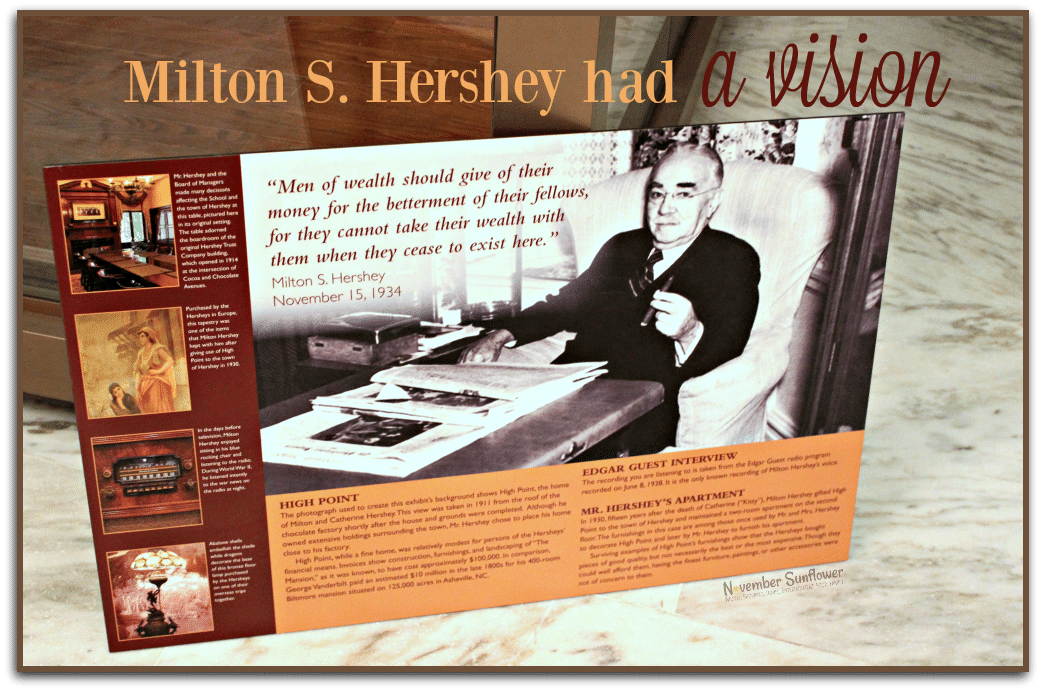 Milton Hershey had a vision

Mr. Hershey married later in life, however he married the love of his life when he finally married. However, his chosen bride, Catherine, wasn’t able to have children. Instead of becoming bitter about the situation, this couple decided to create a school for children who were from “not as privileged” families. It was his goal to provide all children an education, and even though he started small, the vision grew into what is now called the Milton Hershey School, or MHS.

Hershey was all about providing local jobs to local people, and the school started out for local families. However, it morphed into something so much bigger than even Hershey probably imagined. Or, maybe not. Hershey must have known MHS was going to grow far beyond offering amazing educations to local kids, because he created a way to fund his school for years to come.

Milton and Catherine prepared for the future

Hershey and his wife, Catherine, created a trust in 1909. This trust provided for the health, education and welfare of the children attending the school. Hershey appointed the Hershey Trust Company as the school’s trustee, and the key reason for this? Once Milton passed, the trust could handle the school’s investment management, and administration. Yes, over his lifetime Milton gave much of his personal wealth to the Hershey Trust Company, however he knew it wouldn’t sustain it forever. MHS needed a solid financial base, not just for its continuation, but also for its growth. Growth would allow for more programs, and children, to benefit from the school.

The Hershey Trust Company makes sound investments, it has grown to a value exceeding $9 billion today. Hershey Trust Company, as well as the investment income generated by the Hershey Trust Company, fund MHS. The Trust has many assets, and one of their assets is the shares they have in Hershey Entertainment and Resorts. Yes, the financial support provided to MHS comes from all the visitors buying tickets to Hershey Park, getting their “spa on” at The Spa at Hotel Hershey, along with visitors staying at The Hershey Hotel, Hershey Lodge, and of course, Hersheypark Camping Resort. Basically, anything that has the Hershey name on it, helps fund MHS first, and then all of that income trickles down back into the Hershey Entertainment and Resorts company.

Legacy lives on in honor of the Hersheys

Milton Hershey had a vision to provide children with an education they otherwise wouldn’t have had access to. It was something he was passionate about, and made sure would be around long after he was no longer around. Thanks to MHS, thousands of children have received top notch educations, and many of the children who graduate from MHS, also receive financial assistance if they choose to attend college. Yes, you guessed it, the Hershey Trust Company funds that college financial assistance.

When you’re buying your tickets to see a concert at Hersheypark Stadium, or heading to Hersheypark for a day with the family, or staying at one of their gorgeous resorts, you’re helping kids attending MHS. It makes it a little easier to hand over your cash, credit card, or debit card, doesn’t it? Having a great time is one thing, but being able to give to these kids makes the experiences at Hershey that much sweeter. It truly is the sweetest place on earth, isn’t it?

Being a part of the Sweet Welcome 2016 event run by Hershey Entertainment & Resorts, I wouldn’t have even thought to look into who Milton S. Hershey was. I always knew he existed, but never wondered about who he was, or the history behind the park, or hotels. Now? Spending money at Hersheypark, and the surrounding Hershey entertainment venues, as well as the resorts, feels a little more…….comforting. Grateful to be a part of Sweet Welcome 2016, even if it did snow on April 9th whilst there!

The Hershey Hotel, and Hersheypark invited me for two nights, and three days paid for by Hershey Entertainment and Resorts Company. All opinions are 100% my own.