When you’re trying to cut back on pasta, it’s hard to give up a staple like Mac & Cheese. It’s damn near impossible. Pinterest always seems to have an answer to every question I ask myself, and I asked myself “SELF, how can we have mac & cheese without pasta? Is it possible? It has to taste good, too….” Well, I scored another Pinterest victory with a recipe for Dreamy Mac & Cheese Spaghetti Squash from a fantastic blog called Jo and Sue.

I happen to have purchased two spaghetti squashes when I was trying out the recipe for Skinny Spaghetti Squash Alfredo from earlier in the week. I’m not saying why I bought two, but my track record of not being a great cook might have something to do with having to purchase a back-up spaghetti squash. Luckily, I nailed that recipe on the first try, and had an extra squash. I figured if I could get the first one done without issues, the second one would be even easier. I was right!

Look at how pretty this looked! 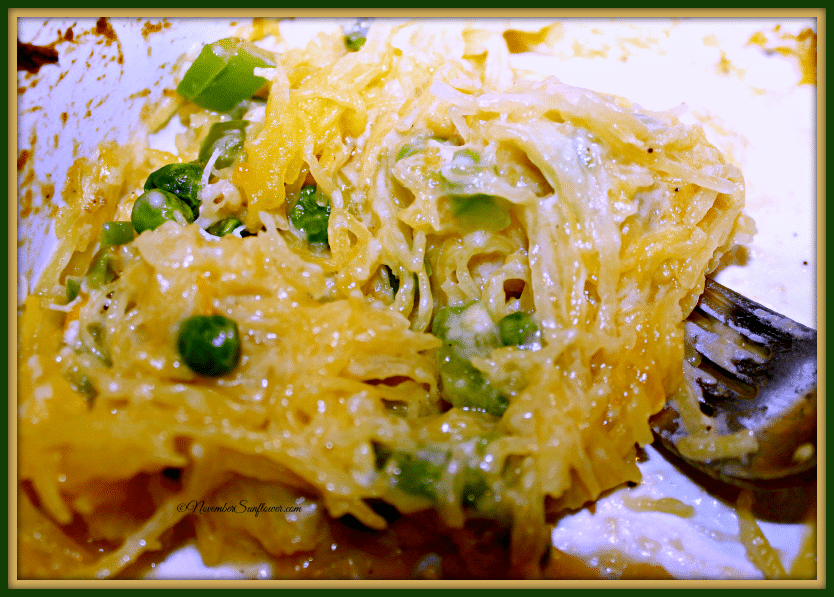 It’s kind of funny, I started eating as soon as it came out of the oven. I was half way done with it before I realized I’d taken no photos of it. I shot into my camera bag and snapped a shot before it was gone! It was good. It was very good. Get the complete recipe for this mac & cheese dish on Jo and Sue and make it for yourself! It’s a huge portion, and it’s all for one. I’ll be making this in a larger batch for me and my little miss, because The Boy won’t go anywhere near the squash – even if I insist it is pasta. He’s not buying it. DAMN KID!