I jumped at the chance to review the four newest dishes in Applebee’s Under 550 Calories menu. It’s important to have places I can go to eat out with friends, without having to look like the DORK-O-LA getting a water and lemon wedge whilst everyone else chowed down. Not a lot of restaurants have healthy options, or lower calorie options, on their menus. The ones that do, well, the food doesn’t taste good. 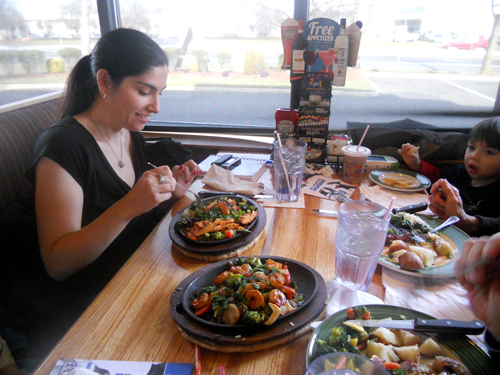 I live on Long Island, and chose to visit Applebee’s on Veterans Memorial Highway. It’s close to the airport. It’s clean. With two kids I always seem to have to visit the bathroom while we’re out! This time The Boy had to go. My report: clean and decent size, too. Not at all cramped.

Our rather friendly and helpful server, Tom, was ready to bring us out our goodies. Who who was with me on this tasting adventure: my Mom, my Dad, Little Miss and The Boy.

What did we sample during our visit? Four fantastic dishes.

We all shared the dishes, but each of us had our “dish” to eat the bulk of.

It was a bit salty, but the sirloin was cooked well and tasted fantastic. The onions were my favorite part, totally don’t give you enough of them in my opinion! The potatoes were tasteless. The spinach was seasoned well, and I ate it, which doesn’t happen often.

Personally, for me, the portion was a perfect size and it was priced well for the meal. Thumbs up. If they can improve the potato and back off the salt a little bit, it would be a STANDING OVATION from me. 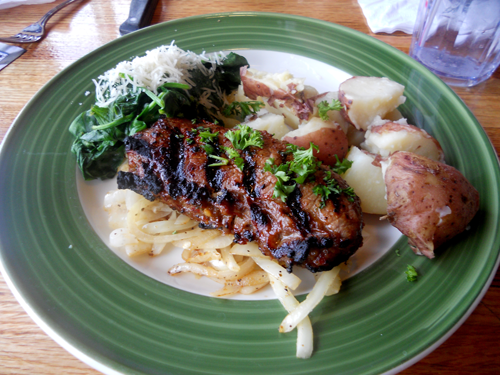 This one is $15.99, which I suspect is due to the shrimp. I don’t eat fish, so my parents had to test the shrimp on this one. Both said it was cooked and seasoned well. The plate has a good amount of shrimp. It’s a 7 oz. sirloin grilled and topped with the shrimp, along with a light cream sauce. It, too, has potatoes, but also seasonal veggies, fresh bruschetta, sliced almonds and chopped parsley.

I tasted the sirloin and it was cooked perfectly, in my opinion. The sauce on top was tasty, I didn’t get too many almonds, though. The veggies…..EH. They were cooked too long, so were soggy. Their snap was lost. I don’t even remember the potatoes, so they couldn’t have been good. The portion was a good size, the meat was cooked super and the sauce on it was fantastic. I’d get this and ask them to leave off the shrimp….but that wouldn’t be worth it for the price. LOL. It’s good, though. I’d give it a thumbs up, but totally need to improve the veggies and potatoes. 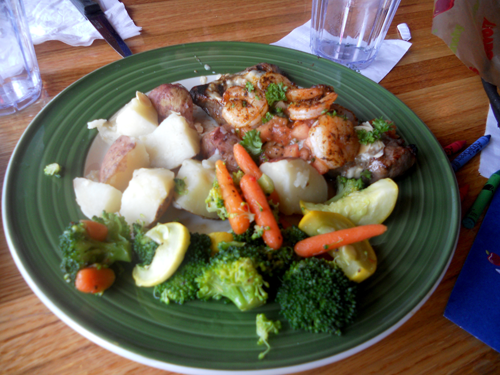 It’s priced at $12.99. The chicken has a spicy sauce, with Asian style veggies and it comes out in a skillet that sizzles. All of the chicken and veggies is served over rice, with fresh cilantro and a squeeze of lime juice. Now, for me, the chicken was really good. It wasn’t dried out at all, totally perfect. I like spicy things, so that worked for me. The veggies were great, had that perfect snap to them. The rice was decent, could have been a little less dry. However, I didn’t taste lime at all. I would have loved to have gotten a fresh lime to squeeze it myself. IF you bring kids, make sure they understand not to touch the hot skillet.

This dish has plenty of food on it. You won’t go hungry, for sure. It’s a great value for the money. But you have to like a little spice, just a little kick. And you shouldn’t look for a lime flavor. It just isn’t there. However, I really liked the sauce and chicken and veggies. Definitely worth it. Half a standing ovation. Would have been a total standing ovation if I had the lime to squeeze myself! 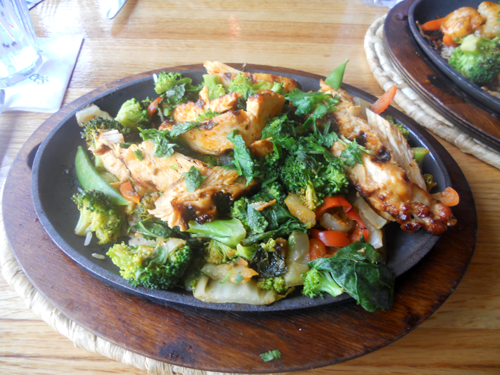 This one’s $14.99. Again, due to the shrimp. It’s Asian flavors with tender spiced shrimp, mixed veggies in a sweet and spicy sauce. It’s got rice under it and a bit of fresh cilantro on top. I tasted the broccoli so I could taste the sauce, it was a good sauce, I liked the veggies. It looked like there was a lot of shrimp on there and Dad gave the shrimp the thumbs up. This was a two thumbs up dish, I’m going on my Dad’s word, since he ate the shrimp. 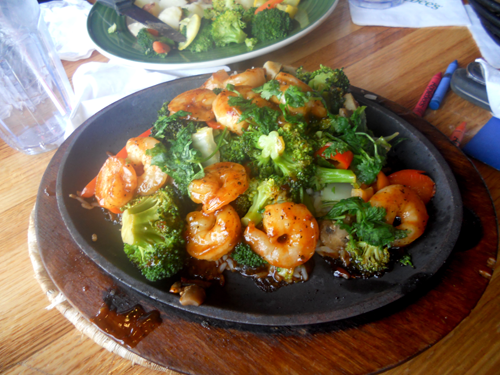 Now, the beef is not grass fed beef. It’s beef. The chicken is chicken. The veggies are not from your garden. It’s not a perfect world where you can eat the best of the best, but for one night out with friends, you have a great selection from these four dishes. If you like shrimp, I’d head for the Signature Sirloin with Garlic Herb Shrimp. If you’re not into fish, but like steak, head to the Roasted Garlic Sirloin. Won’t eat red meat, head for the Sizzling Chili Lime Chicken.

Thumbs up for sure

I would recommend any of these four dishes and honestly, you would NEVER know they were low calorie at all.

The BEST value for the money: Roasted Garlic Sirloin. It’s good, just ask them to put a little extra seasoning on your potatoes and you’ve got a decent meal for $13.99. All of them under 550 calories. Outstanding!

* Applebee’s graciously provided the four meals to sample at no cost, along with our waters. All OPINIONS of these meals are mine, and mine alone (plus my Dad’s on the shrimp I wouldn’t eat). As always, I tell it like it is!