Is there really anything better than tacos? I totally love how Tuesday has become the day for taco eating. It’s the best news for a girl who loves tacos, and loves eating, in general. Little Miss is a huge fan of our oven tacos I found on Pinterest. The Boy wasn’t as big of a fan. Every time he tried the meat, he turned his little face into some kind of Halloween-looking scary face. He then would spit the meat out (into the garbage, he’s not an animal.) Well, now, we’ve got a whole new outcome! Taco Tuesday with Garlic Gold Oil has converted The Boy into a lover of tacos. I could NOT be happier. 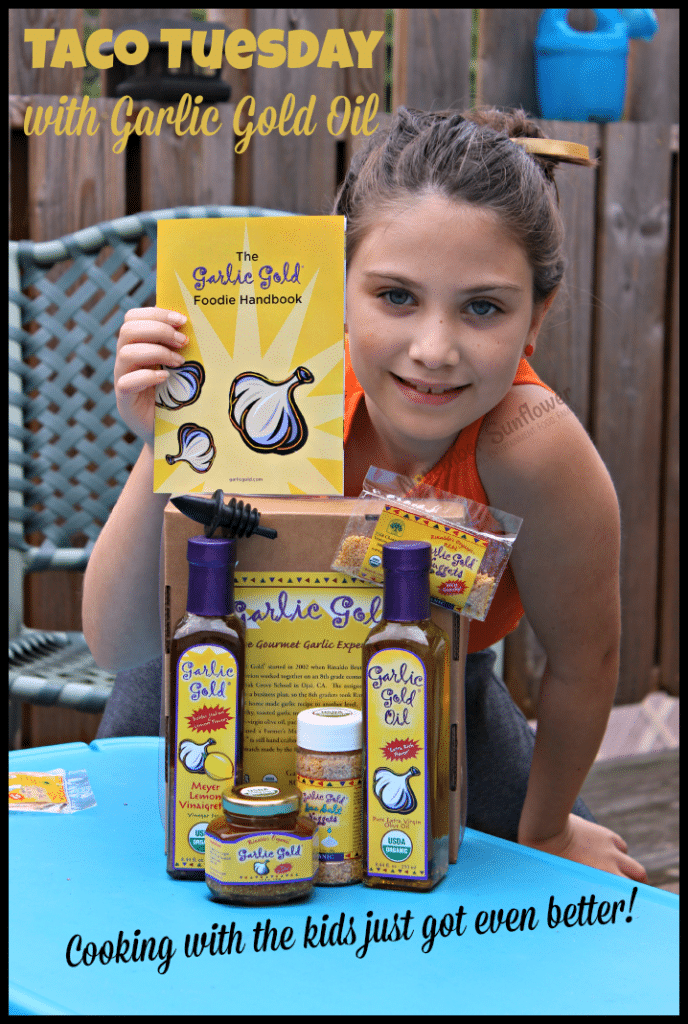 Now I’m going to be brutally honest here: we don’t have tacos every Tuesday, because sometimes we just don’t have time to make them; we’re all addicted to garlic. So with that out of the way, let’s get into our most recent Taco Tuesday festivities. Mr. Sunflower came home with ground beef, or as we normally call, chopped meat. I’m assuming it was on sale.

Little Miss has taken a liking to beef. She’ll eat burgers, and tacos and meatloaf. The Boy recently started eating burgers, and we’ve been trying to win him over with tacos. He just wasn’t having it. He’d try it each time we made it, but to him, it was missing something, I guess. Apparently, I found the golden ticket to his taste buds. It’s a little organic product, and our favorite ingredient in everything we make these days!

Cooking with the kids at Garlic Gold Oil

Mama Sunflower isn’t the world’s best cook by any means. However, we use the kitchen more often than in previous years. Little Miss and The Boy have taken their love of watching all the cooking shows on television, and ask to cook with me all the time. I’ll have to start looking for knives that are safer them to use in the kitchen, but other than that, I’m pretty open to them helping with everything else. Little Miss is good with her knife, but I’d still feel better with ones safer for her and her brother to use. Right now, they get super simple cutting jobs. If I can use pre-cut items, I do. Garlic is one of the hardest things to dice up, so having Garlic Gold toasted garlic in Olive Oil available in a jar, is kind of a big help. 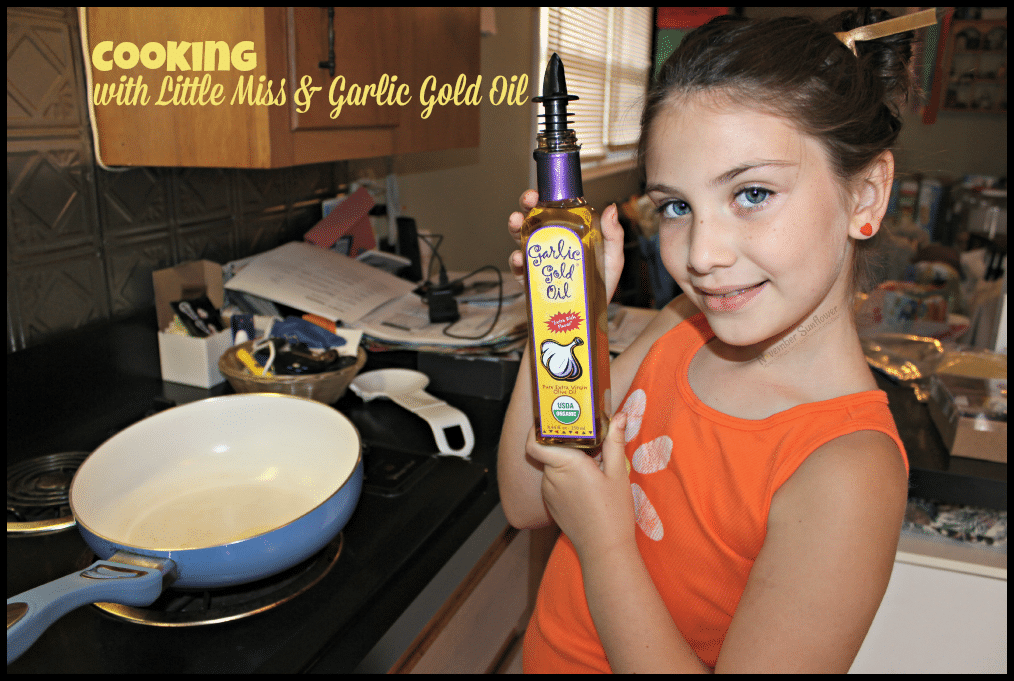 Taco Tuesday requires a bit of chopped onion, so that’s something I handle. The rest, Little Miss and The Boy help with:

Thankfully, the more the kids help cook, the more new foods they eat. Do they always love it? No. Luckily, this time around, everyone was on board with loving these tacos! We’ve got Little Miss giving them a gazillion thumbs up! 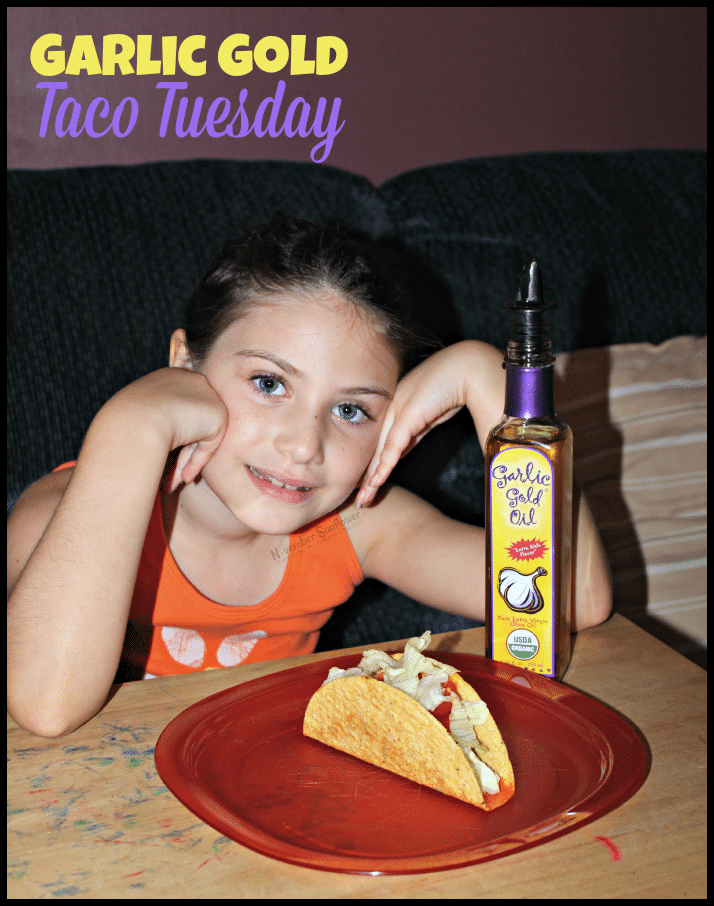 A picture doesn’t do it justice! This calls for a video! Oh yeah, I’m putting it out there, so there’s proof he ate it, liked it, and gave it a thumbs up. When he insists he doesn’t eat them in a week, I’ll show him the video! He’s such a pain in the butt to feed. 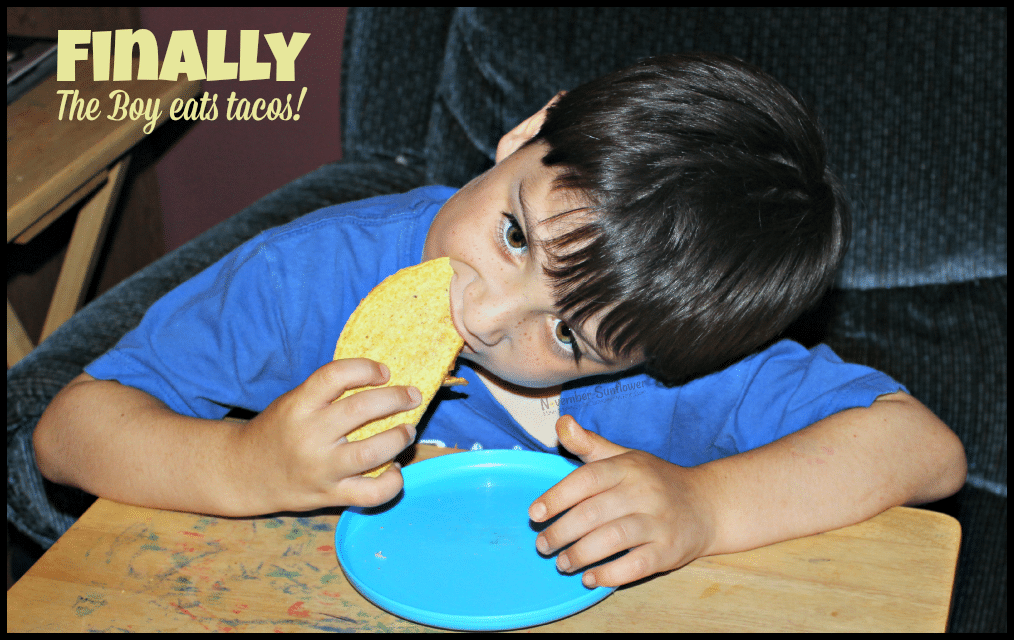 It appears that all The Boy was missing from his tacos: Garlic Gold Oil. BOTH children request a little bit of Garlic Gold Oil drizzled on their meals. A few nights after our Taco Tuesday meal, I made them garlic bagels. I just drizzled some of the Garlic Gold Oil on the bagels, put a few dashes of Garlic Gold Sea Salt Nuggets, and the two of them were in heaven. The Boy let me know “it was the best garlic bread I’ve ever eaten, Mom.”

Let’s just say, I fried up my home grown eggplant in olive oil, with a touch of the Garlic Gold Oil to add some flavor. Best damn eggplant I’ve ever fried up! I’d have only used the Garlic Gold Oil, but I didn’t have that much. I’ll now have to purchase the larger containers of it! It comes in quarts. I’m hoping they’ll have a “loyalty program” at some point, because I’m sure I’ll earn enough to score a free quart very soon! I’m also eying the Parmesan Nuggets they sell….man, I’m going to need some kind of support group people. Right now, it’s useless to try and stop me.