The Pug tried out Just Right by Purina

As if having a human picky eater for a child isn’t enough, I also have a fur baby that’s a picky eater. He does NOT like change in his diet, at all. He’ll go on a hunger strike for days, because he’s so stubborn. The Pug is 16 years old, and he’s been like this his entire pug life. Needless to say, switching him over to Just Right by Purina wasn’t easy by any stretch of the imagination! However, The Pug tried out Just Right by Purina, and though it was a slow process, he’s finally eating it. Thankfully, I see his energy level picking up.

The Pug tried out Just Right by Purina

When you’ve got a picky eater for a dog, changing foods is a slow, and mind numbing process. All the tricks, and tips, are great to hear, no doubt. However, with my unique dog, they never worked. It took me forever to learn how to transition The Pug from one dog food, to the next one, without causing too many issues with his digestion.

Sixteen years of this nonsense, and as he gets older, it’s harder making the transition. However, when it comes to his health, and keeping him around as long as I can, I put the time in to make sure he’s eating completely grain free food. He fights me each step of the way, but he has no choice. As many headaches as he gives me, I still want the little pain in the butt around for as long as I can get him!

Why he gave me such issues this time around: I attribute to his age. His teeth are familiar with a certain shape of food. When he tries new foods they shoot out of his little mouth. Plus, when you’ve had a certain flavor of food, and then your mother just up and changes it without any notice, it’s upsetting for a pet. Not to mention, his 16 year old stomach doesn’t adjust well to food changes these days. It’s all a juggling act, but we’re getting there. I mean, seriously, look at how beautiful this looks! 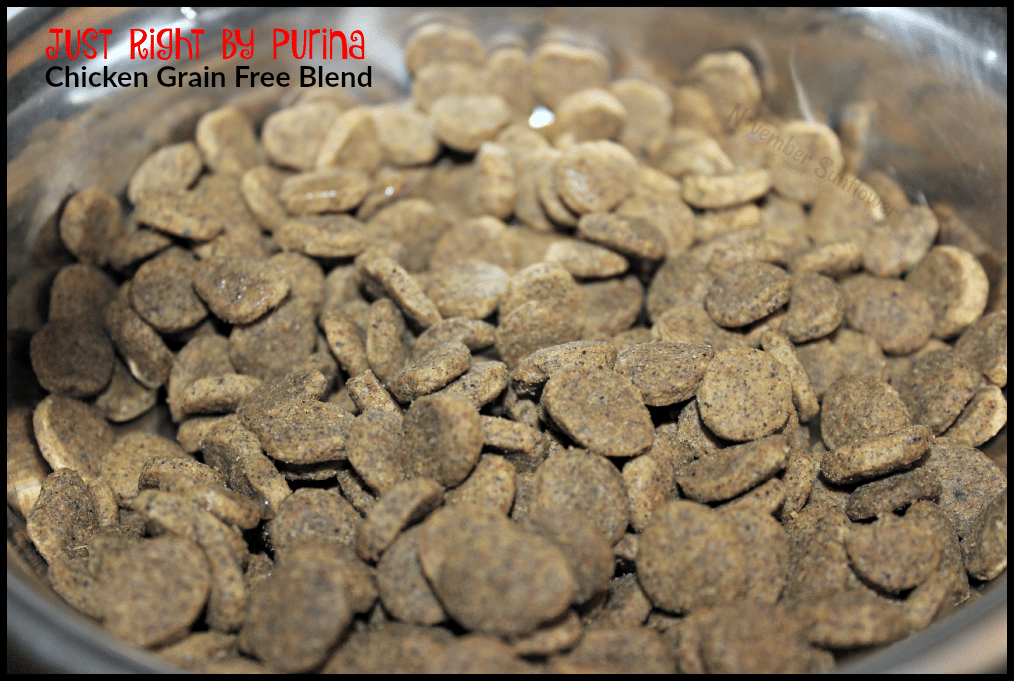 Oh, wait, he can’t see very well these days. He’s doing all of his investigating of the new Just Right by Purina by its texture, and scent. Both are very different from his previous food, so the trick to switching my boy over is to mix the old with the new. Just a little bit at each feeding, mix it all around, and once he stops spitting out the new ones, I start giving him more of the new stuff mixed with his old stuff.

It’s a painstakingly slow process, trust me. I’d find the new stuff all over the kitchen, because it would shoot out of his mouth when he tried to bite it. It took him a bit to get it right, with the teeth he has left! Once we got that mastered, I added a bit more at each meal. If he got a little stomach issue, I’d hold steady at the same amount, until his stomach got on board with the whole change.

Finally, we’re at about 80 percent Just Right by Purina, and 20 percent with his old food. Huge thumbs up for The Pug, and his teeth, as well as his stomach! Once he finishes the chicken blend, he’ll start the Lamb blend. See if his stomach can handle it, if not, back to chicken and not test the waters anymore! We want Grain free. The protein? His belly will dictate the one we land on, along with his taste preference.