Disclosure: The prize pack, and information have been provided by General Mills through MyBlogSpark. All opinions are 100% MINE! 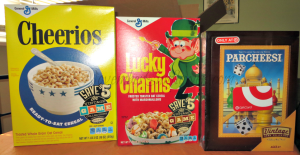 When my kids were born, Cheerios became a staple in our home……..well, that’s what story you usually expect from parents, right? Honestly, my husband is a cereal junkie. He’ll eat Cheerios, out of the box, DRY as a BONE, by the handfuls. No joke. He’ll do the same for Cocoa Puffs, and Lucky Charms. Once we had kids, I’d like to say he became more civilized and put it in a bowl for himself……I’d LIKE to say that’s what happened. Let’s just say this: at least he puts these cereals in a bowl for the kids, rather than teach them to take giant handfuls out of the box.

We live a sad existence here at the November Sunflower home. I admit it. We’re not tech crazed. I mean, we just got flat screen televisions THIS YEAR folks. Why? Because both of our old televisions died around the same time. Scratch that, one started to go red in the kids’ playroom…….we just continued to ignore this phenomenon. One day, we came home, turned the upstairs living room television on, and it looked like it was in 3D, without us having 3D glasses to watch. You know what I mean, right? It looked like the screen when you take your 3D glasses off during a movie……because every damn movie that’s come out the last couple of years has to be 3D. NOTE TO MOVIE COMPANIES: not all movies need to be in 3D.

Anyway…….so, we’re kind of outdated. Just getting our flat screens, we finally got a Blu Ray, and a little over a year ago, I finally got into texting. I know. We’re very RETRO so in wasn’t all that hard for us to go retro with Big G cereals and Hasbro! Our kids, believe it, or not, still play board games. Yes, we have Kindles for them, and they both of a Nintendo 3DS. However, they get such a thrill out of board games. Half the time they don’t play the games the right way. They make up their own rules, or an entirely different game! I think it’s creative.

Leave it to my kids to figure out how to make a totally new game out of Hasbro’s Parcheesi® Deluxe Vintage board game. My son loves anything with CHEESE, so he assumes this game is about cheese. Go with it, he’s 4, and he’s using his brain to be creative. I’m happy, they’re happy, and that’s all that matters at the end of the day.

Since they’re so young, it’s still fun for them to play games with Mommy and Daddy, and be together as a family. We take advantage of this all. the. time. Just so happens, the kids got to enjoy some yummy Retro General Mills cereals during play time! The sugar highs from the Lucky Charms………couldn’t have been more excited for that box to arrive!

Happy kids. Happy parents. I believe that’s what Hasbro and General Mills had in mind when they started the Big G Retro cereal boxes, found at Target, for Cinnamon Toast Crunch, Cocoa Puffs, Lucky Charms, Honey Nut Cheerios, and of course, the old stand-by, Cheerios. We’re loving the time together, and seeing how Parcheesi can be made into a totally different game when two little Sunflowers get their hands on it!

A little bonus……if you want to get your own Retro cereal boxes, or any of the General Mills cereals, I’ve got a coupon so you can save $1.00 off of 2 boxes! Come on moms of the world, you know you could use this for some Cheerios!