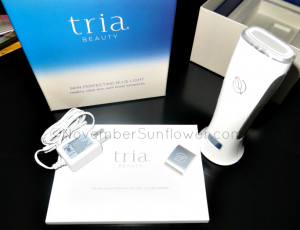 Have you been following my journey with the Tria Skin Perfecting Blue Light? I started using the light back in August, and was getting a bit frustrated after the second week……and there wasn’t much to show for a couple of weeks after my second post. However, I think there might be a SLIGHT improvement after using it for a month.

I’ll be totally honest, though, I’m starting to lose hope at this point. It’s really not making much of a difference in my breakouts, so I’m super frustrated, but I keep using it, because I made the commitment to test it out.

Here’s the before, and the afters, side-by-side. Let me know if you see any real difference.