I’ve shared the excitement, the horrible security scare with my daughter, and the dismal meeting we had right after the incident.

Now we come to the final installment (for now) of how Disney Cruise Line handled our DEBACLE.

While ON THE BOAT: A couple of Stuffed Mickey Dolls

After speaking with Cassandra, and never having the opportunity to speak with the Cruise Director, we were basically done with it during the cruise. I didn’t want to think about it anymore, I didn’t want the kids to think about it anymore, and the lack of professionalism by the Disney Cruise Line’s Cruise Director, and Oceaneer’s staff, wasn’t going to destroy our entire vacation. I went off to my pedicure appointment at the spa, Nick and the kids hung out. While I was at the Spa, I also changed our couples massage appointment to a massage just for my husband, happening later that week after our day at Disney World! We had planned to enjoy some time together on this 9 day cruise, but it was quickly realized, we were not going to have that happen. Thanks Disney Cruise Line. Much appreciated. When we all returned to the room, a gift had been left in our room.

First, the gift was from the guest services person who was told that we needed assistance with this whole issue. He didn’t have to do a darn thing, except get the manager from the Oceaneer’s Club. Second, he thought of BOTH of my kids, which is more than Cassandra did when offering to make notes in the computer for our daughter….forgetting we also have a son, even if they didn’t screw up his wristband THIS TIME. Three, the gift wasn’t from anyone at the Oceaneer’s Club, or even the Cruise Director.

The gift? A couple of Stuffed Mickey Mouse dolls. Very cute. The kids loved them, they still do. We even thanked the guest services man when we saw him at Castaway Cay during our cruise. He even remembered my daughter’s name. Score one for Disney Cruise Line. You have an exceptional staff for your Guest Services desk. However, it stops there. Well, no. I take that back,  we had a great wait staff – so score two for the Disney Cruise Line. However, they had nothing to do with the safety issue. 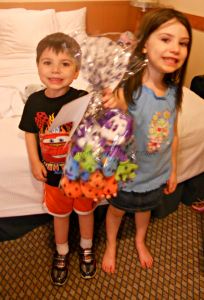 OFF the Boat: The Insincerity of Guest Correspondence (which is who you have to contact AFTER your cruise if you have a grievance)

Once we arrived home, after the highs, and the substantially low LOWS, I contacted the email for Guest Correspondence. Apparently, you aren’t allowed to contact the Disney Cruise Line’s customer service number and make complaints. I was given an email, by Customer Service, for the Guest Correspondence people. Awesome. At least everything would be in writing……..

My first interaction was with Joel Hayes, Executive Guest Correspondent for Disney Cruise Line. He kept offering his sincerest apology for “any disappointment with your cruise vacation.” He was also “so very sorry to learn about not only your concerns about security in our youth clubs but also how your concerns were handled.” And my favorite “your concerns about the bracelet were, indeed, taken very seriously when they were brought to our attention and reviewed by all of the appropriate shipboard officers.” Oh and when he closed his email, he made sure to write “there is magic in the Disney name, and we hope to have the chance to sail with you again one day soon.”

My daughter’s safety is a bit more than a CONCERN………and disappointment is kind of an understatement when your daughter’s safety is put at risk…..and all of your “sorry” talk is complete crap, when you follow it with asking me to give you another chance because there’s magic in the Disney name. Are you serious, Joel? NEXT.

Joseph Paris, also an Executive Guest Correspondent, emailed me back. He called our issue “guest feedback.” My daughter’s safety was considered “guest feedback.” You lost me right there, but I continued on with the reading of the email. Hoping that they would tell me exactly what had been done to rectify this type of situation, so it wouldn’t happen again. No such luck, just a whole lot of “we are truly committed to maintaining high standards of safety and security at sea and in port” and my all time favorite line “your concerns were, indeed, taken very seriously and addressed with the appropriate technicians, shipboard officers, and shoreside managers in order to determine, IF NEED BE, where any necessary enhancements should be made to our cruise ships.” This was followed by “we hope this experience will not deter you from returning to Disney Cruise Line in the future, as we look forward to having you sail with us again.”

Joseph, seriously, do you think that I’m going to sail on Disney again after you just wrote this ridiculous email, referring to a BREACH OF SECURITY with my daughter as a CONCERN? And then follow it up with “determine, IF NEED BE, where any necessary enhancements should be made to our cruise ships.” WHAT? You’re done, next please.

Rebekah Young, ANOTHER Executive Guest Correspondent with Disney Cruise Line writes to me that after all of the previous emails have been reviewed, she was “very sorry to read your various concerns.”

You were sorry to read my concerns, Rebekah? Well, first, are you sorry that this happened, or are you sorry you had to read them? And next, are you still calling this breach of security a CONCERN?

Rebekah then follows that up with “unfortunately, we do not believe that compensation is warranted for any of these circumstances, nor will there be an opportunity to escalate these concerns, since our team has been designated as the final authority on matters related to guest compensation. Again, I regret any disappointment, as we hope you might consider sailing with us again in the future. If not, we wish you well on your future travel endeavors.”

HOLY CRAP, did you just call it a CONCERN again? And refer to this as DISAPPOINTMENT again? Really? Let’s also mention I didn’t ask for money, as my daughter’s not something I can put a price tag on, and she certainly doesn’t have a bar code on her butt. She’s not FOR SALE, nor is her safety. No one asked you for COMPENSATION, I asked you to make it RIGHT. Are you so jaded that you think everyone is out for MONEY? What has this world come to, people? It’s not about MONEY, or COMPENSATION, it’s about a FIVE YEAR OLD LITTLE GIRL being put in MAJOR DANGER by your fantastically INEPT Oceaneer’s Lab/Club counselors, on your ridiculously old, and outdated, Magic boat.

I love how they called them my concerns, and disappointment – yeah, that sounds about right. You put my daughter at risk, and call it “my concern” and “disappointment” in the trip. Are the three of you out of your flipping minds? And then ask me to sail with you again?

Hey, Joel, Joseph, Rebekah and all of the Disney Cruise Line Guest Correspondence team………you really know how to destroy the Disney name, don’t you? At least I know it’s not Disney as a whole who treats people, and CHILDREN, so poorly. Perhaps further training should be extended to all of you, so you can learn the difference between a BREACH OF SAFETY/SECURITY, and a CONCERN, or DISAPPOINTMENT. They are not the same, and I hope nothing like this ever happens to a child in your life.

I’m just thankful, grateful, and BLESSED, that my daughter didn’t get hurt during the time that your staff decided my daughter wasn’t at all important to the “MAGICAL” Disney Cruise Line’s Magic.