It happened more than a month ago, and it still makes my blood boil. I’ve been attempting to write this blog post for over a month, without having the anger come through…..however, I’m not sure if that’s realistic.

Can you ever get over a company, geared toward families and kids, completely disregarding the importance of a child’s safety? I’m not sure, because I’m not there yet, however my story needs to be told.

Since our story is a lengthy one, and I want to be fair to the cruise line, I’m breaking it into a few posts.

Let me also be very clear: DISNEY CRUISE LINE IS WHO DID THIS and I have nothing against the Disney brand, however the Disney Cruise Line brand is no longer one I will do business with.

In April of 2011, on my birthday, I sat down at the computer, and anxiously awaited the chance to book a Disney Cruise out of NEW YORK! My sister had been going on them for years, my parents had gone on one, and my siblings had done one together with their families. I wasn’t able to do any of those trips for two reasons: They were all out of Florida, and I do not fly; and we just couldn’t afford the trips at the times those trips were scheduled.

Disney Cruise Line coming to New York was a huge deal. It meant I didn’t have to fly in order to have this vacation of a lifetime for me, my husband, and our kids. Plus, with all of my strategic shopping skills, I had saved us so much cash, we could now afford this vacation (plus the purchasing of passports.) It was such a huge gift I was able to provide for my kids. Disney is at the heart of every man, woman, and child. And this cruise out of New York would not just provide a great chance to take the big Magic boat, but also to have a day at Disney World, where the kids could see the Magic Kingdom for themselves.

It was our trip of a lifetime. I booked it on April 8, 2011, and the plans were set in motion. The beauty of the Disney Cruise Line when booking, is that if you decide you are not able to take the trip, you can cancel and get a full refund. You can do this until you make that FINAL PAYMENT, which was in May of 2012. However, in my mind, nothing was stopping us. At this point I had no idea child safety was not their top priority on the Disney Cruise Line.

The Calm BEFORE the Storm

Everything was set, passports were done, bags were packed, the kids even got their own suitcases on wheels for the big event (purchased straight from the Disney Store.) My father drove us to the pier in NYC, and the trip began. TIP for those who are first timers: Even though you have a designated time to check in, you can check-in whenever. Another TIP: You’ll be waiting for a bit of time, so bring snacks. There’s no place at the pier to purchase anything, and even if there was, it would have cost a fortune. SO bring snacks while you wait to board.

After waiting for a bit of time, we boarded. Once on board, they directed us to where we could grab something to eat, because the rooms wouldn’t be ready for a little while longer. We were lucky enough to get into the buffet before it got too packed. The basics of that day: We ate, found our room, unloaded our stuff, got familiar with the room, then headed out to explore the boat before we got our luggage, along with a visit to Oceaneers Club & Lab with the kids, and dinner was ready for our scheduled meal time. Then back to the cabin, got our luggage, went to dinner, headed to the Bon Voyage “deck party,” and*** packed it in for the night, because we had some major rough seas that night during a storm. TIP: If you can swing it, sign up for the later seating. Having it earlier cuts into a lot of the fun you get involved with. However, with two little ones, it worked out for us. 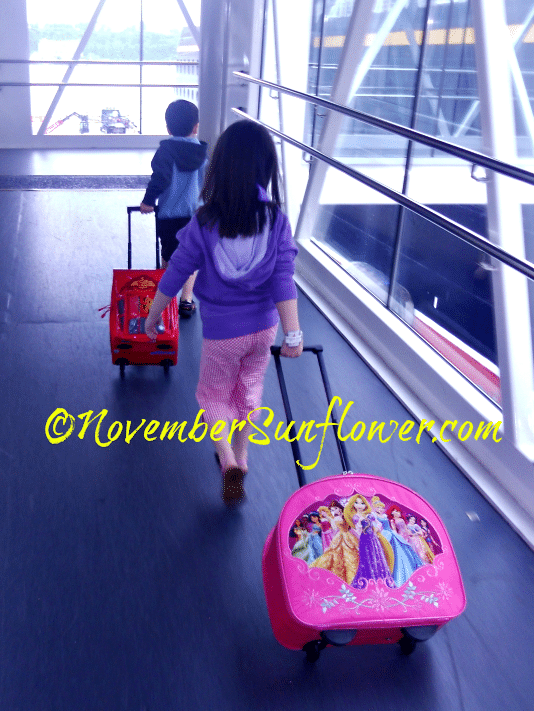 ***New York had been dry as a bone for WEEKS leading up to our cruise, but of course, the day we left it was POURING. Unfortunately, because of the weather, the Bon Voyage event normally done outside on the decks, had to be moved into the Atrium of the Magic boat. If you’ve ever been on the Magic boat, you will understand this is not a big space. Needless to say, too many people + super small space = danger for everyone. Apart from my kids not being able to see a darn thing, my husband’s eye was almost taken out by a paper canon thing they shot off. You know the ones, they make a loud pop, things come flying out of them, in this case, confetti. Well, confetti wasn’t the only thing that flew out of one cannon in particular. A HUGE piece of cardboard came right at my husband’s face, thankfully missing his eye by about an 8th of an inch. Honestly, I’m just happy it didn’t hit anyone’s child. At this point, we just blew that off, it was an accident, what can you do? Perhaps we should have taken it as an OMEN of what was to come for our family……

Learn about what happened in my next post: Disney Cruise Line – Child Safety is NOT their top priority.