Our daughter wanted to see the Disney Princesses, and we weren’t going to let her miss out on this activity. For our kids, seeing the characters had quickly become the favorite activity of our trip. Of course, she wanted to see each of the princesses, however by the time we got on the huge line, a couple of the princesses had already left the main atrium. Since the line was SUPER LONG, and we had a bit of a wait, I took the chance to go up with another mother to make my formal complaint about what happened at the Oceaneer’s Lab. The other mother had two things to bring up to them, I just had that one, pesky, tiny little issue of my daughter’s safety being put at risk. Nothing big, right? At least not to Disney Cruise Line, that is.

Guest services was very nice. They truly were sincere in saying they were so sorry for what had happened, and they got the manager from Oceaneer’s Lab/Club down to see me, and my fellow upset Mom, rather fast. Kimberly was down in record speed, without even knowing what my particular issue was. She was just told about the other mother’s two issues, nothing about mine. After the other Mom told of her stories of what happened up at Oceaneer’s Lab, I was given the floor.

I explained what had happened to my child. Upon hearing my “what happened”, Kimberly went silent. She looked like she had been slapped in the face, and I hadn’t even touched her (wasn’t her fault, right?) She apologized, and proceeded to tell me that what happened up there is grounds for firing. It should never have happened, and she was going to find out what led to my daughter’s wristband being removed, and then replaced with another child’s. I told her “Great, I want a call from someone, and even better, I want to meet with someone, like the Cruise Director. I also want to know how this happened, how it is being handled, and how you will be making this whole situation “right.”

Kimberly assured me someone would be in touch with me at some point today, and I told her to get back up to Deck 5 and figure it all out, before this girl screws up another child’s wristband, and puts another child at risk. She hustled back upstairs to Deck 5 to investigate. I got back on line, told my husband we should be hearing from them “at some point today.” Little Miss saw a few of the princesses that had stayed for the entire time, and then we went off to forget about this incident for the time being, and enjoy our vacation – with ice cream cones! 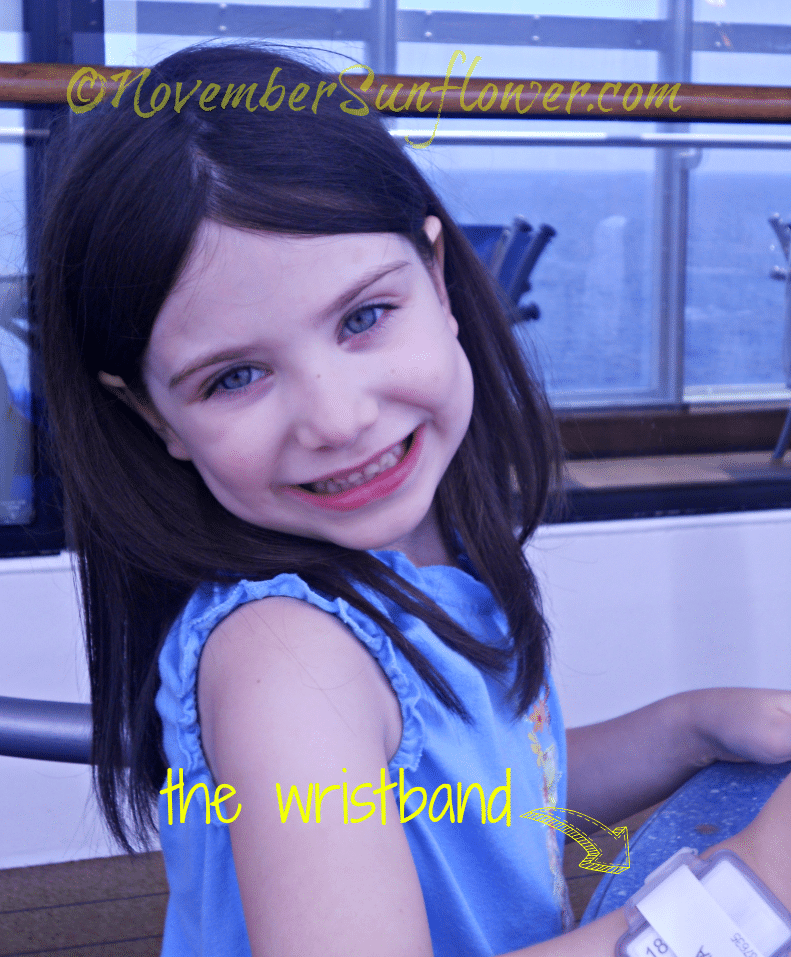 While we were having our ice cream cones, Cassandra the head of the Oceaneer’s Lab/Club called our fabulous WavePhone. She asked if we could come back to Deck 5, where the club is located, so she could speak with us about what happened. The kids were not done with their ice cream cones, so I told her we could be there in a 10 minutes, as we were TRYING to enjoy a little time together after what went down. She said it was fine, just to come up when we were done, and ask for her when we arrived. She’ll drop whatever she’s doing to speak with us.

Cassandra was lovely. She explained what had happened. Apparently, the other little girl had done something to her bracelet, which alerted them through the computer screen. When this happened, the counselor made a new wristband for the little girl. This counselor then went around looking for the little girl. She happened to find my daughter, with a similar name, and cut my daughter’s off, replacing it with the new wristband meant for the other little girl. She also worked into the explanation that “we had texted you to come to get the kids, and she apparently thought your daughter wasn’t there anymore, and wasn’t paying as close attention.”

My answer was “We didn’t get the text until we were having ice cream upstairs, which was over an hour after you sent it. And it should NOT have mattered, because that’s just the most ridiculous excuse for making such a huge security break I have ever heard.”

Cassandra nodded, and said “absolutely right.” She went on to explain the girl had been reprimanded, and she was not able to tell us how she was disciplined. I thought that was crap, and I said so. She nodded again, and stated all she could do for us was put a note in our daughter’s “file” on the computer stating that she was to be checked in by managers only, and any issues with her wristband would be dealt with by a manager only. My first answer was “that’s great, but in this instance, you had no clue who she was. Her wristband was removed because your counselor was LAZY, didn’t check to make sure she had the right kid, didn’t double check anything, just took one band off, and replaced it with some other kid’s wristband, so how does this ‘note’ make it any better for my kid?” And my husband chimed in with “and what about our son? You’ll put a note for our daughter, but we also have our son. He’s just going to be left out? Do you think he’s less important to us?” She said the notes would be made for both of them. However, she didn’t address what I had said “you can put all the notes in her file you want, but if you have a counselor remove her wristband, without double checking who she is, and replace it with some other kid’s wristband, it’s not going to matter what you have in the computer, because now, my daughter is walking around with the wrong wristband – when you scan it, you’re notes aren’t going to show up for her, the file that shows up is for the name of the child on the WRISTBAND. Do you get what I’m saying?” She just kept nodding.

Clearly, she had no clue how to handle this. I’m probably the first parent to catch them in this HORRIFIC kind of mistake.

She won the kids over, they gave her high fives and hugs, however they never wanted to be left there again. “They tried to give me away to another family, Mommy. I’m never going back there again. And they didn’t even listen to us when we asked to leave.”

And that was it. No Cruise Director came to chat with us, just the manager of the club/lab. The answers we got were kind of silly. Making a note in their files makes no difference, because the wristband is attached to the child, and all the info you have in the computer doesn’t matter when you CUT OFF MY DAUGHTER’S WRISTBAND AND REPLACE IT WITH ANOTHER CHILD’S WRISTBAND. So all your computer notes mean nothing. The PROCEDURE needs to be changed. Perhaps TWO counselors double check when a wristband is about to be cut off? Make sure the right kid is attached to the wristband! Maybe find a way to scan the wristband before you snatch it off the child? Double check you’ve got the right kid, and the right wristband? Just a couple of ideas. Clearly, these types of things never occurred to anyone on the boat.

We got nothing from that talk with Cassandra, except a whole lot of “We can’t tell you anything, but hey, bring your kid back and see if we f*ck up again and really put your kid in more danger.”

Thankfully there was no emergency while our kids were in that place – no fire, no evacuation, no allergic reactions (who knows if the other little girl had allergies, and now she had no wristband that worked to attach her to those stupid “files”), no falls, and no need for us to be reached, because they’d be calling the other little girl’s mother instead of ME – the one that can give the okay for medical attention to be given in an emergency.

But the story continues, my friends……on, and off, the boat. It’s SHOCKING how we were treated, especially once we were off the boat and dealing with Guest Correspondence. My story continues with Disney Cruise Line Debacle: Stuffed Mickeys and Insincerity.