Technically, this was our “second” day on the trip, but it was our first full day on the boat, and on vacation. I had looked at the personal navigator with Little Miss. She wanted to go to Oceaneer’s Lab to make a craft, and we thought it would be a great chance for the kids to get the “club experience.” Plus, it would nice to find some new friends. We had our Character breakfast, then headed to the Oceaneer’s Lab to drop the kids off.

First, the organization was terrible. No one knew where to go, how to drop off their kids, and the counselors were a bit rude. I had been told such amazing things about this club, I put aside my concerns about their lack of organization for the drop off procedure. We dropped the kids off, being assured over, and over, the staff had everything under control, they were all highly trained, and it was actually very organized, even if it looked like chaos. The kids had already stepped into the club, and were told to wash their hands, and sort of guided to the big sinks. They ran to wash their hands, so we called out “see you in an hour.”

We returned an hour later……everyone seemed to be calm, having fun. Kids were making Flubber, which I knew Little Miss hadn’t been interested in. However, the “manager,” Kimberly, said the kids were finishing up Flubber, and we had to wait until they were done. I said my kids weren’t doing Flubber, but she just held her hand up, and insisted we waited. I figured I wouldn’t get all nasty on the first day, let’s wait for that until the second day. Of course, little did I know what was about to happen.

THE TEXT that came an hour later

If you’ve never gone on a Disney Cruise before, let me tell you about their WAVE phones. They suck. The phones are how the counselors contact parents. First they send a text, then they CLAIM they call. Well, my children requested that we come and get them after they were there for about a half an hour. We didn’t get a text a half an hour after we dropped them off. When did that text come through? Over an hour later, after we had already gotten our children from the lab. We also never received a phone call. Their explanation for that? When the kids request to be picked up, and they text the parents, and the parents don’t show up, but the kids have calmed down, and seem to be having fun, they don’t bother calling. WHAT?!!! It’s not up to them to decide to not call a parent, that’s just insanely stupid. Especially when kids are young, as my kids are!

Are you shaking your heads in disgust? I was. So not a great way to do things. Especially with those WAVE phones being such garbage on the Magic. They were retro-fitted, so of course, they won’t be as good. How about the Oceaneer’s Club & Lab have their very own system to get in touch with parents? Might be a smart idea on older boats.

However, that’s not the end of my story with my child. We all know I have two kids. Little Miss and The Boy. Well, when we were FINALLY let into the lab to pick up our kids, we had to go and find them. My husband went to look by the Flubber project, which I knew our kids had not taken part in, and I went to go look over by where they were doing the door hang craft. There they were, finishing up their craft. I knelt down, and Little Miss looked up, and saw I was there. She smiled, and then asked “Mommy, what took you so long? We asked them to call you to pick us up so long ago.” I looked at the counselor that was working with them, and asked “Who called us? We didn’t get a call.”

My husband made his way over, I told him to look at the phone, and nothing was on there. No text, no call missed, no message. I told Little Miss we never got a message, if we had we would have come immediately. She seemed okay with that, we collected their stuff, and The Boy asked again “Why’d you leave us here alone? We wanted you to stay with us? They said they would get you.” I was now PISSED. My plan was to hit up Guest Services after we saw the Princesses in the Atrium.

We took the kids over to sign them out. What a nightmare. People everywhere, parents yelling at counselors about how unorganized this was, how come it’s taking so long, and just a bunch of complaining. There were more kids than counselors, so yes, it was going to take longer, that’s not a legitimate reason to scream, yell, and throw a fit. And then I was handed the PERFECT reason to scream, and throw a fit: I wasn’t contacted when my kids asked me to be contacted. However, what I didn’t know was I had a much larger problem on our hands……

THE SAFETY ISSUE THAT NEVER SHOULD HAVE HAPPENED

Before I could even rip into them about what my kids had just told me about asking to be picked up, the scanner was beeping and not allowing my daughter’s wristband to be scanned. The counselor, Nica, who was being pulled at by kids behind us, along with them pulling things out of the machine when she printed wristbands, and just major chaos, scanned her wristband again. Still wouldn’t register.

Let me back up a second here, and explain their “process.” When you register your child for the Oceaneer’s Club, whether you do it online before you even go to the Pier to your cruise, or you do it at the Pier, or at the club itself – all kids need to have a wristband. When we got to the Pier, I had already registered the kids, and just needed to get their wristbands. We waited online while at the Pier, it ate some of the waiting time sitting around to board the boat, and got them set up with wristbands. Safety Issue ONE: The wristband had the room number my kids were going to be staying in, as well as the Mickey Number assigned to them. RED FLAG.

My kids had these bands on. The bands are HORRIBLE. The plastic crap you’d get at a water park, with a huge, plastic piece that sticks out like a watch. Kids are suppose to wear these for the entire trip…….they are uncomfortable, clunky, and way too big for small wrists. The Boy has super sensitive skin, and the rash started almost immediately. He wasn’t in love with this, nor was I. In any event, that big, plastic nightmare houses all the information for your child. It’s how the counselors can track them once they’re in the club.

And this band, was NOT WORKING on my daughter. THREE TIMES she tried it. I picked up her wrist, looked at the band, and read the name…….and it wasn’t my daughter’s name. Nica looked at me, all the color in her face drained, and she said “what do you mean that’s not her name?” I said it again “This is NOT my daughter’s name, you have the wrong wristband on my daughter. Why was her band replaced?” I looked down at Little Miss and asked her “did you get it wet? Did you ask to have it replaced? Did it fall off?”

Little Miss answered “No Mama, someone came over to me when I was doing my door craft. She said she had to replace my wristband. She cut it off, and put this one on me.” Again, Nica looked like she was going to throw up. She quickly removed the incorrect band, mumbled “this is a big mistake” and made my daughter a new one. The incorrect bracelet was quickly moved away from us, before I could snatch it back up as proof. It was very obvious they were doing their best to “hide” what happened, in hopes if they played it off as if it was no big deal, I might not care that my daughter was put in major danger!

Meanwhile, there was another mother who was holding up her line…..guess why? Yup, her wristband wasn’t working either. Why’s that? Because my daughter was wearing her daughter’s, and my daughter wasn’t properly identified for AN HOUR while she was at that stupid club. Which also meant the other little girl didn’t even have a working wristband while she was there. However, I didn’t get the chance to chat with her, as we were basically pushed out of the lab’s little gate as quickly as they could get us through the gate!

Let me also state that I could have been anyone telling you this is my daughter. All Nica did was take my word for it. GRANTED, my daughter was calling me Mama, Mommy, and Mom. Plus, my two children look IDENTICAL, so there is no mistaking they are siblings, and my son’s wristband was right. However, there should have been a little more effort to make sure my little girl was actually MY KID. Perhaps identification from me, my husband? Maybe even my card that got me into my room, or was used to charge things to my room while on the cruise. SOMETHING???!!!! ANYTHING????!!!! 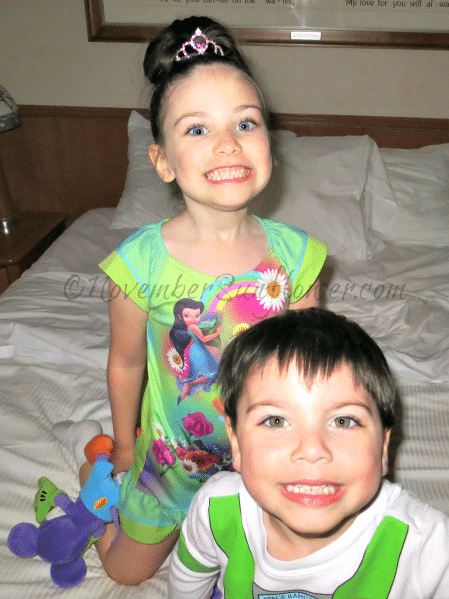 No Mistaking these two are related!

Anyway, back to the wristband being totally wrong, now quickly having been removed from the little “desk” by Nica, my mind started to go WILD with various images of, well, I’ll let all the scenarios play in your mind like they did in my mind……….

And then being snapped back into reality when your daughter asks you “Why would Mickey want me to go with another family Mommy? Doesn’t he know who my family is?”

What happened after? I’ll be filling you in on the next post. You can find Disney Cruise Line Debacle: The Meeting.