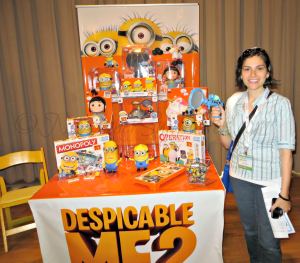 If you’re not a fan of the movie Despicable Me, then you definitely won’t be in love with the sequel, and you most definitely won’t enjoy this blog post. It’s all about the coolest darn toys ever created, and showcased at Time to Play’s Spring Showcase in New York City. When I saw this display, I was like a moth to a flame…….and I was so lucky I didn’t bring the kids to this showcase, or they’d have never let me leave the table to explore the other amazing toys showcased that day.

I’m going to tell you, I have not reviewed any of the items yet. I’m just giving an overview of what’s out there, and in time, I hope to be able to review some of these #DespicableMe goodies.

Without further ado, let’s talk toys, shall we?

First on my list is the stuffed U-NEE-CORN from Thinkway Toys. If they came out with nothing else, and just the Agnes’ Fluffy Unicorn 14″ Plush, I’d be happy. Seriously, it doesn’t get any cuter than this toy. 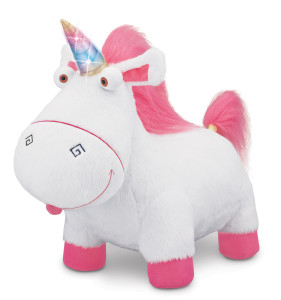 Yes, it has pink on it, but it’s not that horrible baby pink I despise. It’s a more rich pink, which isn’t as bad, and I can handle, since this thing TALKS! It has a voice, magical chimes, and sings the Unicorn Song. Goodness sake, how can you not want this? It’s even a decent price! It’s going to sell for $29.99. I’d pay that for this plush. When you press the hoof, you’ll hear Agnes say “It’s so fluffy” or you’ll hear the magical chimes, which has lights and other effects. It’s got a lullaby mode, where you rock back and forth, and it’ll sing the Unicorn Song, with the horn lighting up. I have to get my hands on this toy ASAP.

Number two on the list is from a collaboration between Fisher-Price and Basic Fun. It’s the always fun, always entertaining, Despicable Me 2 View-Master®! 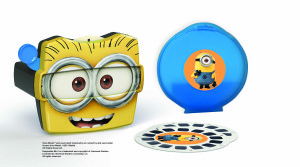 It’s 50% brighter than your older View-Master from 70 years ago, and in 3D with larger images! The viewer is going to be $9.99, with the packs of reels costing $4.99. They’re even putting together a gift set, which has the View-Master, 3 reels and a branded case, for $14.99. PERFECT price point for anyone who has to have one for their family!

Number three on my list of must haves from this line of toys…….well, it’s a tie. As a kid, I loved playing both Operation and Monopoly. Hasbro has come out with BOTH games with a Despicable Me 2 theme. I’m in absolute heaven. It’s kind of the perfect way to introduce the games to my kids, because who doesn’t want to enjoy these games MINION style??!!! Both are going to be priced at $19.99. 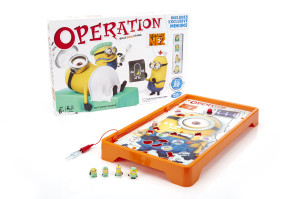 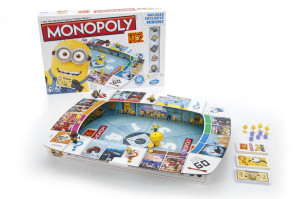 Operation comes with 4 unique Minions for the kids, and they are only being sold with the game. Monopoly……really? Does anyone need to know why it’s a must have in every home?

Number four on my list is a bit…….childish, but I don’t care. It’s hysterical, and I love it. I mean, seriously, it’s a Fart Gun. Thinkway Toys developed a Fart Gun toy…….how can you not want it? It might be a little over the top, and cost $24.99, but COME ON!!! Hey, that’s not all though. There’s a version of the Fart Gun that has a Banana Scent The one with scent is only going to be at Toys R Us, though. 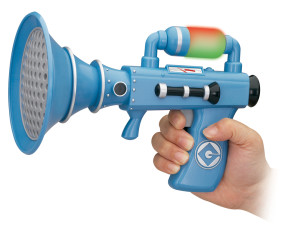 Number five on the list is the very cute, very important Build-A-Minion from Thinkway Toys. EVERYONE out there needs a minion of their very own, and if you can’t have a real one, you should be able to build your own! At least that’s how I feel! It’s a great price at $14.99, so say yes to the minion!!!! You’ve got options for this one, too. You can get Mr. Tim Minion/Party Minion OR Baby Carl/Party Minion! Gotta love options. 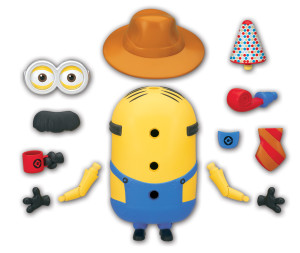 Our sixth on the list is the awesome Thinkway Toys’ Dancing Dave. He’s 8.5 inches of fun. He talks, and sings. He responds to your voice. Plus, he can dance to your favorite songs, or his own. Sort of like the fantastic little Willa the FIJIT toy my son adores. Now I can get him a minion that grooves to music, and he can have dance off with them. SWEET. 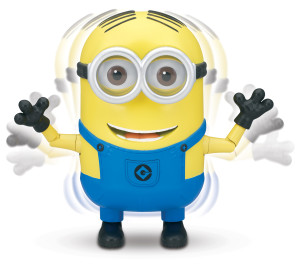 Lucky number seven on the list is Thinkway Toys’ Minion Mobile. Kids who love remote controlled cars will love this bad boy! It’s 9 inches, it’ll cost you $44.99 (so make this one for a special occasion splurge,) and when you press the talk button on the remote…….you can hear minion voices straight from the movie. It’s a little more money, because it’s got infrared remote control operating it. It’s not your average antenna controller! It also has Minion Tim as the driver, and another minion can bop away in the back while Tim drives. I’m in MINION OVERLOAD. 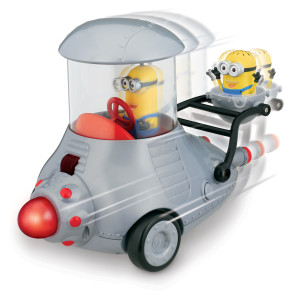 Finally, number eight on the list is………Minion Goggles, also from Thinkway Toys. They are the perfect toy to buy for all those birthday parties you’ll have to attend over the summer. It’ll cost you just $7.99, and it’ll probably be the one toy every kid will talk about as their favorite from their birthday gifts. Seriously, how can you not want these? I’d buy them for my entire family if I could! 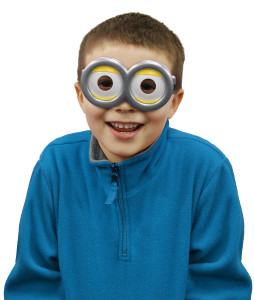 It’s not all about physical toys that you can touch. Gameloft is coming out with an all-new Despicable Me game for iOS and Android markets. If you’ve got a smartphone, or tablet, that runs on iOS, or Android, you’ll find it for download this Summer. There’s not a lot of information about what the game will be, but with Gameloft working on it, it’ll be phenomenal, I’m sure.

I don’t know about you, but this movie hits theaters on July 3, 2013…….I’m going to be bringing the kids to see it. It won’t be opening weekend, but it’ll be pretty close to it! The minions are calling my name already………