Disney Fireworks in the bedroom

Disclaimer: I was not financially compensated for this post. I received the Disney Fireworks Light Show Launcher for review purposes.

The opinions are my own, and were NOT influenced in any way. As always, it’s 100% my thoughts, and opinions!

Rainy day fun? Evening activities on family night? Of course Uncle Milton’s Toys would come up with a Disney themed toy for the kids to enjoy! What kid doesn’t want to have Disney Fireworks happening in their bedroom? Right there, up on their ceiling, or on their walls every night!

I enjoy Disney. I’m not what you’d call a Disney fanatic. I’ve always enjoyed the movies, I’ve visited the parks, and my kids have experienced Disney’s Magic Kingdom. The kids are BONKERS for characters, and have pictures with everyone from Chip & Dale to Tinker Bell. However, given the chance, they’ll take photos with any character from any cartoon. Granted, the Disney ones are their most favorite, but honestly if I dressed my husband up in a bear costume and slapped a tiara on the bear’s head, they’d want a photo with the bear.

When it comes to Disney movies, the two of them are “all-in.” They want to see them all, and they want to watch them more than fifty times if I let them. They ask me regularly if we can go back to Disney World, and we’ve even started a savings account to help us stay focused on that Disney World trip they so ache for. Keeping their little minds at bay while we save up our pennies for the trip (hoping for Autumn of 2015,) isn’t easy. The movies only keep them off the Disney World topic for a couple of hours, so what’s a mom to do?

Well, this mom finds awesome Disney-themed toys to make it seem like a piece of Disney World is with them all the time! The Disney Fireworks Light Show Launcher is a winner, winner, chicken dinner, for these two. My only concern is the price tag…..

What November Sunflower thinks of the Disney Fireworks toy 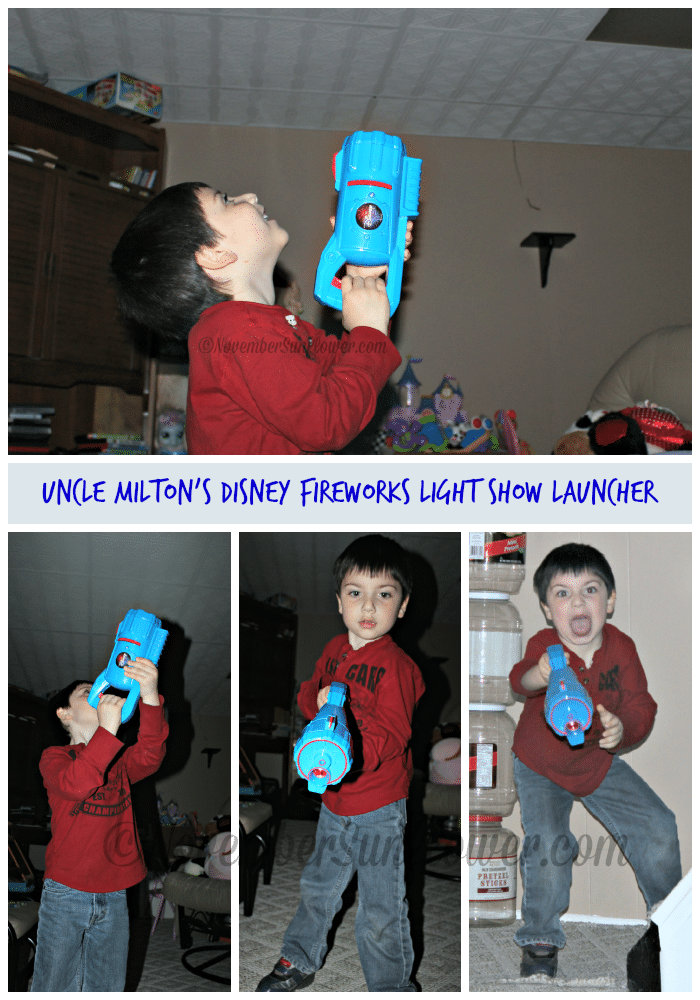 We all know I like to buy things. I’m not someone who hoards her cash and never spends it. However, when I spend it, I like to know I’m spending it wisely. I’ve got to be honest, I think the Disney Fireworks Light Show Launcher is made really well. The fact that it’s made by Uncle Milton toy brands is a huge bonus. I know if it’s coming from Uncle Milton it’s going to be high quality. Whenever I look for Disney-themed products, I try not to buy directly from Disney brand itself. I find the items purchased from the physical parks, as well as the stores, tend to fall apart or break quickly.

When buying Disney-themed items, I’m big on finding a high quality toy brand who has the licensing to put out Disney character toys. Uncle Milton is one of the brands I trust, so I know this light show launcher is made to last. It’s going to be knocked around, but it’ll still keep on ticking! Especially with my son, I need to have toys made well that can take a beating. In this respect, the toy is totally worth the price tag.

However, the toy only has eight different firework slides. It’s got all the best, since they cover Tinker Bell, Cars, and Buzz as well as the regular standards of Mickey Mouse and the gang. I love the sound effects. They’re great. A volume control would have been a bonus on the launcher, but for the short amount of time each night it’s being used, I’m dealing with it!

My hang up with this toy? If I spend $36.99 on a toy for my kids, I want it to have more than 8 slides of firework shows. It should have at least 20, and perhaps the opportunity to swap out the slides. There’s only 8, and there’s no way to swap out slides as the slide part is not removable. Again, the toy is solid. It’s not cheap-y plastic, it’s made REALLY WELL. It’s just super limiting for kids any older than the age of 4. Yes, on the box it says for kids 4 years and older.

Children four and under can be entertained with the same 8 slides for hours……my son, at the age of 5, loved playing with it for the first half an hour because he loved the noise it makes, plus he got to do it in the dark playroom, which is always cool. It gets played with before bedtime, as a kind of “bedtime fireworks show.” However, I’d much rather you guys find it on sale over the next few weeks, or check out eBay. I saw it on there for around $25.

November Sunflower gives one thumb up for quality, and sound effects. However, if it was priced lower it would get two thumbs up.