LeapFrog® LeapReader™ experienced by 12 children at one time

Disclosure: I received free LeapFrog products in order to host the LeapFrog sponsored MommyParty. As always, the opinions are one hundred percent mine. Unlike other times, I’ve also gotten a little feedback from TWELVE children. Yes, 12 kids in my house at one time. I’m amazed I’m still standing!

If you ever doubt that my job is hard, let’s just remember how I had LeapFrog LeapReader experienced by 12 children at one time IN MY OWN HOME. Yes, that’s right. Originally I was going to host it in my son’s Kindergarten class. Let’s just say the teacher he got wasn’t someone I’d want to do this project with. She’s a little “far out” there and if it was up to me, she would have been told to retire last year, instead of at the end of this year. Honestly, if it was really up to me, I’d have my son taken from her class to another one, but he’s got his two closest friends in his current class, and he doesn’t want to move to another one. Soooooo, here I was with TWELVE kids in my house to check out all the goodies #LeapFrog and #MommyParty sent me to sample!

#LeapReader is one of the few items I’m a fan of with LeapFrog. It works, I’ve never had issues with the system and the books are Disney centered, so the kids love them. Little Miss is a bit older, and can read all on her own. However, she’s still in love with it. We have the older version of the system, and now she’s hooked on the new one, too. How can you not love being read to? As for The Boy? He loves the reading part, but what he’s really taken to is the writing aspect of this system. Yes, that’s right. LeapReader doesn’t just read books, or help your kids learn to read, it also helps them learn to write.

In my home I had a nice mix of kids. They ranged from 2 years old to 7 years old. I have to say, most of the seven years old kids weren’t as into the books. I don’t blame them, they all know how to read, and it wasn’t as much of a thrill for them. Little Miss decided to bring some of the younger ones to the side to show them how the pen worked with the books. On the other side of the room, The Boy took the flashcards and some books to show his friends how the pen worked when you wanted to learn to write letters. The older kids helped the younger ones until I released them to hang on their own, and the younger ones sat and used the two pens and plethora of books! 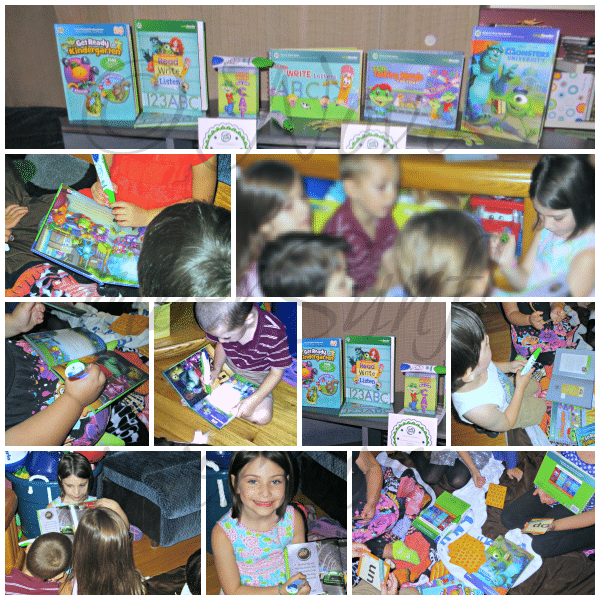 Here’s the ONE COMPLAINT from everyone: It’s not loud enough. If you’re home, in your room, sure, it’s decent. However, if you want to take this out with you while traveling – it’s just not loud enough. If you’ve got 12 kids in one house, and 6 of them are trying to use the system and the other 6 kids are playing and having fun, the pens are just not loud enough. The younger ones got a bit frustrated, but kept trying their hardest! One little guy loved it so much, I sent him home with one of the systems. He just loved it so much, how could I not??!!! 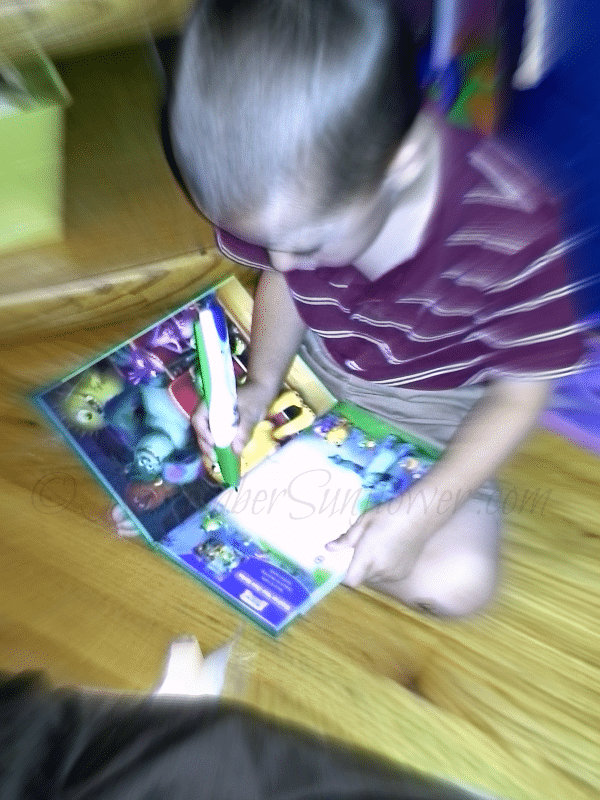 My personal opinion on what to get? The Disney-Pixar Monsters University 3D book was a big hit with my kids, and a few of the other five years old kids. A huge hit with my son, and one of the other little girls were all the workbooks and flashcards that helped them with writing their letters. The Kindergarteners are going over their letters these first few weeks of school, to refresh their minds from last year’s Pre-Kindergarten learning. Plus, for the kids that are just starting school for the first time this year, it’s a nice to have the help at home when learning the letters all the other kids have learned in their previous years of school.

The Boy has been able to write his letters for a couple of years now, but what I have noticed since using this system….his HANDWRITING is neater. Leaps and bounds neater. It’s impressive! Here’s why. The system really does make the kids trace the letters the right way, or it tells them it doesn’t recognize what the letter is and DO IT AGAIN! When writing, it’s the same thing. Totally love it.

LeapReader gets my stamp of approval. Total quality for the money, and the cost ranges depending on what you want to start off with. I find that just getting the pen isn’t a great deal, you might as well get a bundle package, especially if one comes with the headphones! If you plan on using this for traveling, or if your kids are loud around the house – the headphones would be a great addition!

Check out all the their products at the LeapFrog website! I recommend the LeapReader Writing and Math Bundle. It’s on sale right now, and has the pen, the headphones, and two great bundles of books. Amazing value at the sale price! It only comes in the green, though.