Disclaimer: I received Bubble Guppies Rock & Roll Stage, as well as a variety of Teenage Mutant Ninja Turtle products, in order to facilitate this review. They came from Nickelodeon. All of the opinions are that of my children, and me!

It’s always fun to see how the kids react to toys based on their favorite Nickelodeon television shows. Bubble Guppies is a big favorite of my son, and he’s been into Teenage Mutant Ninja Turtles for a long time now. It’s cool to see the turtles back in action.

What does one do on a rainy day on Long Island? Well, my kids get to break open some new toys to check out. Music, and turtles……it’s kind of the perfect day for my kids when both of these things are combined into one afternoon of fun! The dancing fool, also known as The Boy, fell in love with the Bubble Guppies Rock & Roll Stage, but wasn’t impressed with the Bubble Puppy that only rolled down a little wave.

It’s all good though. As soon as he realized there was an on/off switch on the Rock & Roll Stage, he figured out there had to be something special about the stage. He was right!

Dancing has been happening every day since we introduced this toy into the house, and I’m kind of regretting showing him the switch. I love the guppies, don’t get be wrong, but hearing the same music, and jokes every day, over and over……it’s getting a little old. It’s my one of two issues with the toy. The first issue…..the little star “door” the guppie flies through to get to the stage is always falling off. If you pay over $20 for a toy, it’d be nice if the parts didn’t fly off so easily. However, the kids love it so much, I can’t be too upset.

As much as we love the guppies, the star of the day was the Teenage Mutant Ninja Turtle, Leonardo, who flings sewer lids out of his belly. Does it get any better than that? Apparently not for my kids. Here’s my beef for this toy: those darn sewer lids get lost way too easily, and quickly. We’re down to 6 left. It should come with extras! 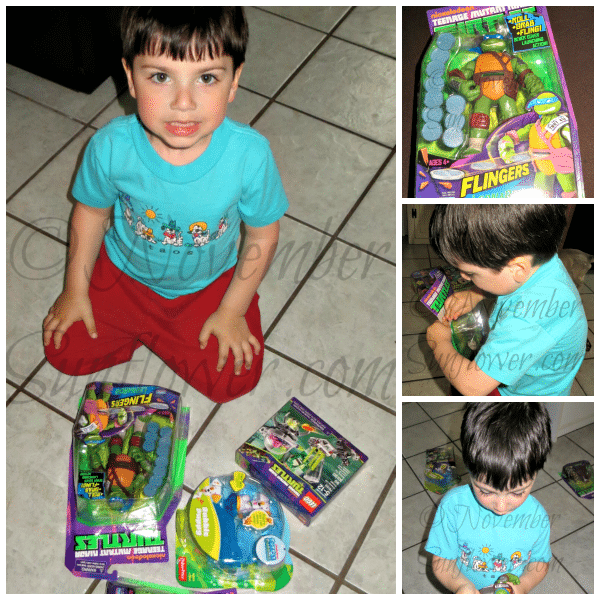 The Boy can be heard playing with the Flingers down my hallway…..at least I know where it he, and what he’s doing. Plus, it’s keeping him entertained, and away from the electronic devices for long periods of time. TMNT Flingers are a winner in this house. Now, we just have to find more Sewer Lids…….