The Kids and their new B. Teepee

Disclosure: I received a B. Teepee from Just B. Toys in order to write this review. I received no monetary compensation. All opinions are mine, and those of my children.

I haven’t seen my kids in days…..well, just a little over the last couple of days since our Just B. Toys B. Teepee arrived. The kids and their new B. Teepee are united forever. Seriously. 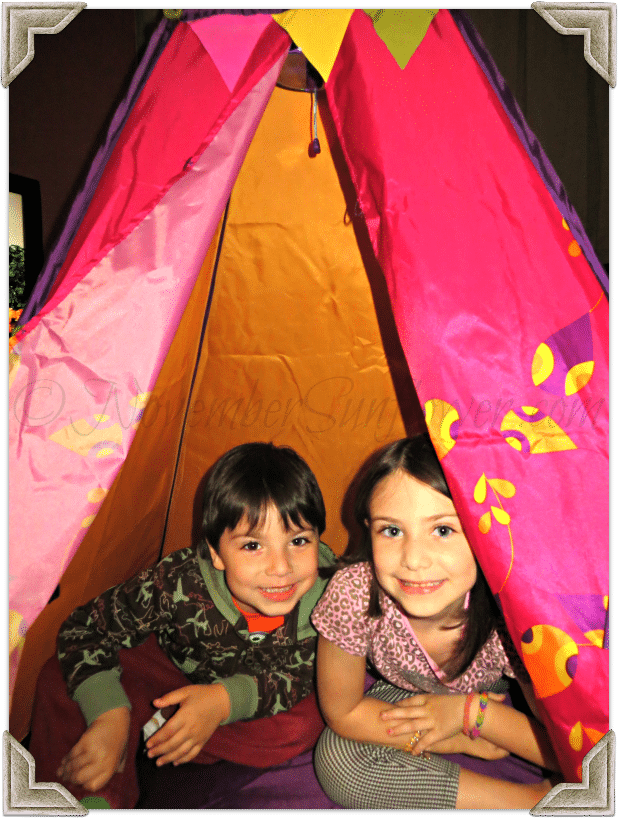 My children have only come out of the tent since Friday for the following reasons: bedtime, Jiu Jitsu, meal times (well dinner time, anyway.) We have it in the Living Room, on the floor. They have put blankets in there, along with pillows, and have basically moved in for good. Personally, I couldn’t be happier! The tent is so well-made, and very pretty, so I’m okay with it in my Living Room looking all “fine.”

After dance on Friday night, I came home and told them to get ready for dinner. When they came back into the Living Room, I showed them the box with the TeePee in it. Squealing started as soon as they saw it had lights.

“Oh yeah, Disco Party.” These were actual words uttered by my son. Now first of all, he’s never been to a disco party, so I have no clue where he learned that from. Second, did he think he was going to dance in the TeePee? I just shook my head and opened the box. Opening the box was the hardest part of the whole process. No joke. It took me a while, especially with two excited kids running around the house.

Once the box was open, it was simple to put together. I was able to do it all on my own – so we know it has to be super simple! The kids immediately entered the TeePee and made it their own. 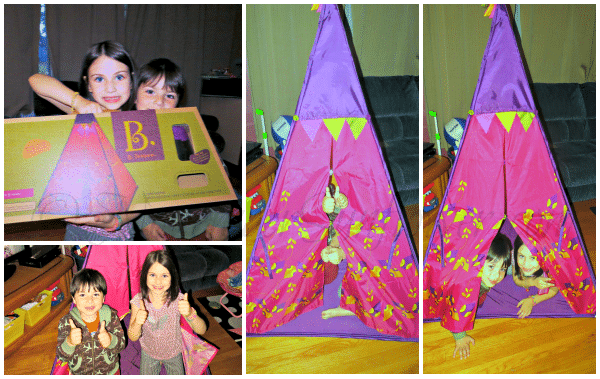 I have to tell you, I wish I could just hang out in this TeePee. I’m too big though, as my son was all too willing to scream from inside the tent when I opened the flaps to check out how they decorated it with blankets and pillows. Little brat. The material is strong, the poles, when you have them put together correctly, are strong. My daughter is turning 7 in November, and she’s a very delicate little lady (most of the time,) so the tent is perfect for my two kids. If you’ve got kids that are rough on toys, this is not going to work for your kids. It’s meant to sit and play in, or read in, or gentle playing.

If my son had more room in his bedroom, I’d get him the blue one to place on his floor. Perhaps when he’s older and doesn’t need the extra space “in case he falls out of bed,” I can get him one. My daughter? She’d love to have this stationed in her room, right in her Tinker Bell nook we created last year. However, her desk is in that nook, and until her brother can have one for his room, this B. TeePee is staying in the Living Room for now.

My only issue with the TeePee? The light at the top that makes it a “disco party,” falls off the hook a little too easily. My husband had to squeeze the sides of the holder around the hook in order for it to not fall down AS MUCH. My daughter is good with it, my son is a bit more aggressive when pulling the string to make it light up. More often than not, he’s the one coming out of the tent with it in his hands asking for one of us to put it back up. I would imagine I’ll be doing that a lot……since the kids have moved into the TeePee and made it their permanent residence. I’d say it is a DEFINITE two thumbs up from the Sunflowers!

You can send all fan mail to B. TeePee, C/O NovemberSunflower.com on Long Island!