Disclosure: I was not financially compensated for this post. I received the product for review purposes. The opinions expressed within this post are my own, and were not influenced in any way. 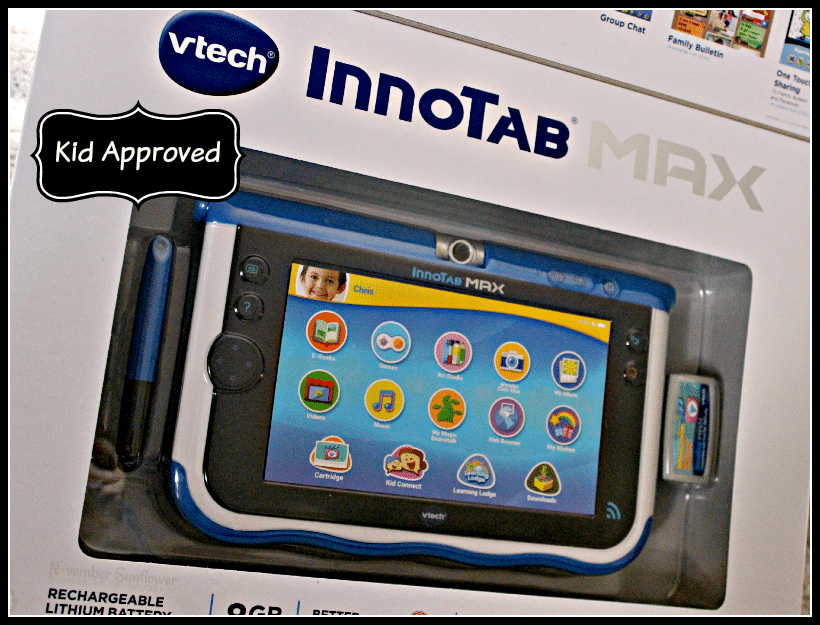 If you had asked me if the kids would enjoy the VTech InnoTab MAX learning tablet before receiving it, I would have said “Probably not, they already have tablets from the land of adults.” However, I’m always willing to have the kids test things out, when it falls into their age group. Since my kids fall between the ages of 3 to 9 years of age, the VTech InnoTab MAX fits the bill, and so the kids were signed on to test it out. All I have to say is: I’m SHOCKED they actually fight over it. Go figure!

What is it about tablets? Kids are drawn to them. It’s like this all powerful magnet, it just drags them away from whatever else they’re doing. It’s like when us moms see the Target sign, that bulls eye just draws us in. Our cars just magically arrive in the parking lot, and the next thing we know we’re down $150 and packing our trunks with Target bags. (Don’t even try to deny it, we all do it. Just own it.) Tablets just have this magical power…..

My children have been using an Android tablet for a couple of years now. It’s a tablet that’s basically for adults, but we just download kid-friendly apps to it. I figured the kids would get the InnoTab MAX and be like “great, what else are we testing out today.” I did NOT expect them to fight over the damn thing. They are in love with the learning apps. The 15 onboard apps have Movie Maker, Art Studio and Wonder Cam Max. Basically those three have kept the kids busy for DAYS on end.

The camera rotates 180 degrees, which is great, because most of these tablets only let you flip back-and-forth from the front facing, to rear facing. It might be favorite part of the tablet. Lame, sure, but it’s nice to have that option for the kids. The kid-safe WiFi allows the kids to watch videos, and visit websites that are age-appropriate, so it saves me time! VTech took care of all of that, and if I want to increase their options, I can. Parental controls are helpful, because I can shut down web access, tablet time and if they happen to figure out how to change any of that, I can check the view progress log to double check what they’ve been doing on the tablet. BIG MAMA IS WATCHING!!!!

Personally, I find the Kid Connect a bit difficult to figure out. It’s not easy to set up if you have more than one kid. The tablet is kind of slow, but the kids seem to be okay with the speed. When using the stylus, it just doesn’t work as well as the kids’ fingers. However, I do enjoy the stylus being ATTACHED to the tablet. Less likely it’ll get lost. My son loses EVERYTHING that isn’t nailed down. It’s a problem. I do believe it’s the reason my hair is more grey than it truly should be at my current age.

Our most annoying issue with the tablet? When I first opened it, I set it all up on the small charge it had right out of the box. It was then full charged up, and given to my son. It kept shutting down for no reason. He got a bit frustrated, so we let it drain and charged it again. After that, it seems to be working fine. Obviously it starts acting nutty when the battery is super low, and needs to be charged. When the battery is low, one expects it to shut down at odd times. However, it took doing two full charge cycles for it to work properly.

Kid Connect is still kind of annoying, and when I can get the damn tablet away from the kids, I’ll attempt to figure out setting up my daughter on it, too. The Boy is set up, now I just need to get my daughter on there IF it’s possible. UGH, I hate figuring that stuff out!

All-in-all, the tablet is super cute, the kids adore it, and have been fighting over it for weeks. Whenever the kids play with something for more than one afternoon, it’s a huge winner. TWO WEEKS later and they’re still fighting over it, that’s a thumbs-up, toes-up, and a happy mom kind of situation. Well, the fighting isn’t great, but at least it’s a sign VTech knows what they’re doing to engage kids!