What does Hasbro have coming to us?

It’s just.too.much. My head is spinning with all the awesome-ness happening with Hasbro. My brain is ready to explode. Do you have any idea how cool it is to see updated stuff centered around so many items I had when I was a kid? Twister, the Care Bears, My Little Pony, Play-Doh, and oh yes, my friends, G.I. Joe.

I feel like I’m a kid again…….and my Christmas List just got a little bigger for my kids, just because I want them to get all the fun stuff I use to play with, only updated with a new spin. I love it. I LOVE IT.

Oh, and yes, there’s some new stuff out that looks rather cool, including Angry Birds and that crazy game everyone is addicted to, Bejeweled. I don’t play it, but I get updates flashing on my wall all the time of those out there playing it on Facebook! I see all of you addicted out there. So instead of offering you a 12-step program, I’ll inform you of the physical game! HAHAAAA. Yup, I’m evil to the core.

Let’s get going, because I’m about ready to piddle in my chair from the excitement….

Twister has come out with a Twister Rave line. It’s all about lights, and movement, and will only be expanding into a line of trendy clothing, and accessories. Do you remember Twister? You spun the little arrow on the cardboard piece, it landed on a color, you had to place your hand, or foot, on the color on the big board on the floor. We all remember it, we’ve all played it, and we’re all kind of thinking “how the hell did we bend like that?”

Well, the RAVE versions are a bit different. They actually get kids up off their butts, but they don’t have to mangle themselves up around other people! Plus, these light up…..so Summer will be a lot of fun at night after pool time is over, and it’s time to enjoy beautiful summer nights. 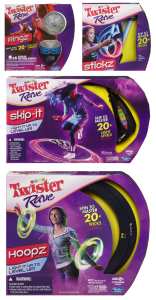 Bejeweled® should be a game almost everyone has heard about, if you’re on Facebook! There’s so many friends of mine who play this game, and my wall is filled with their accomplishments. I’m kind of hoping the game becomes popular to do at home, and not so much on Facebook. It’s cluttering up my wall, and I don’t even play it. Hasbro has come up with a physical game kids can play together, or adults can enjoy them as well. 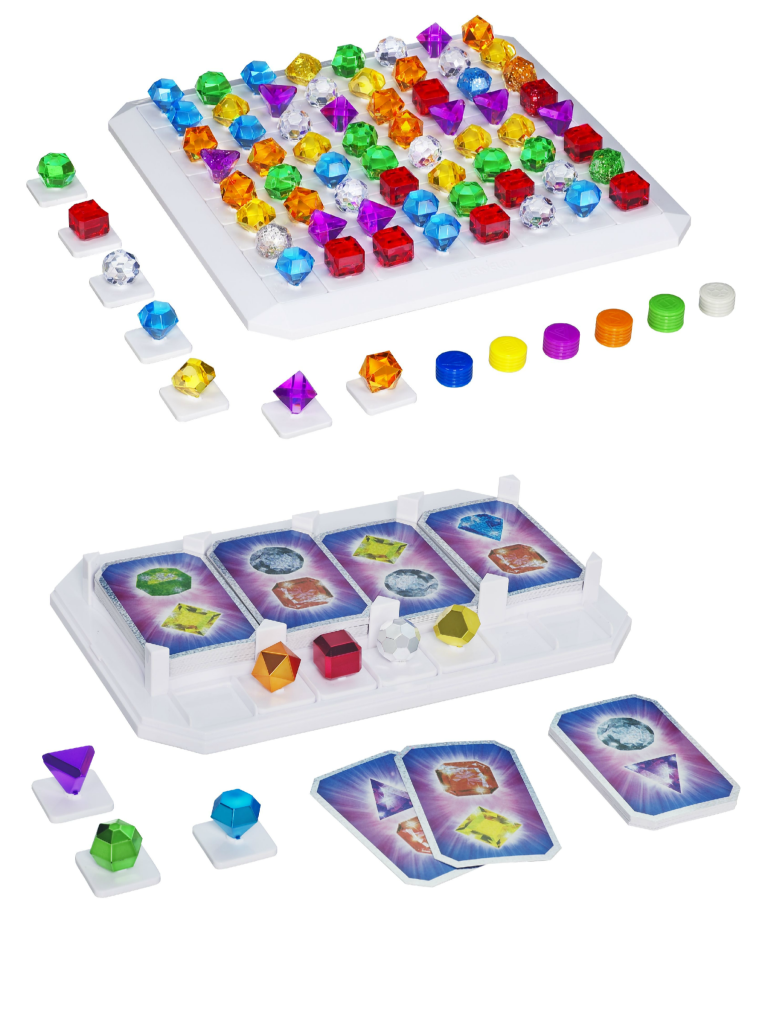 Care Bears were a staple when I was growing up. I loved mine, and I still have it. Now, you may not find it shocking a little girl kept her Care Bear all these years, but for me, it is very shocking, because I usually destroyed almost everything I had growing up. I just loved stuff hard core, and they got ragged. I’m not sure why my Care Bear made it through the years unscathed……perhaps high quality craftsmanship? She’s purple and I love her. My daughter will probably end up with it in her room at some point……at least she’d like that! Lucky for her, and many kids out there, Hasbro now has classic plush bears like my old one, as well as updated, sleeker versions for the more mature girls we seem to be raising today! Plus, figurines, too. 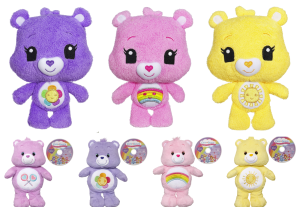 My Little Pony is another one I loved as a kid. Of course, we didn’t have any pink ponies, but they came in so many colors, it worked out rather well! As a kid I had a castle, and a nursery for the little baby ponies. Hasbro has come out with a few new items for Spring of 2013, which have some really cute hits, even one that’s <gulp> pink! What’s the world coming to when I’m okay with some pink……as long as my daughter doesn’t want it, we should be fine!

Play-Doh is one of those things we all love, yet we cannot stand cleaning it up. Better yet, we can’t stand finding it mashed into the carpet after we’ve cleaned it up, and it’s five days later. However, it’s still such a huge favorite amongst kids. I don’t know, there’s just something about the smell of it when you crack open a new container of Play-Doh……takes you right back to your younger years. Apparently it’s all about baking, and Disney for Spring of 2013! 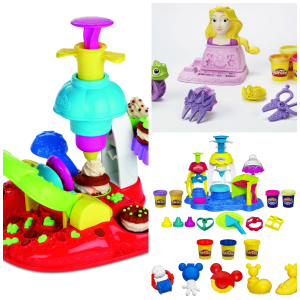 G.I. Joe: It doesn’t matter if you’re a girl, or a boy, EVERYONE can get down with G.I. Joe. My sister and I played with them, my mother played with them as a kid. My kids, a boy and a girl, both enjoy good G.I. Joe fun! They came out with a ton of stuff in 2013 already, but there’s a few items coming out for the upcoming Spring/Summer. 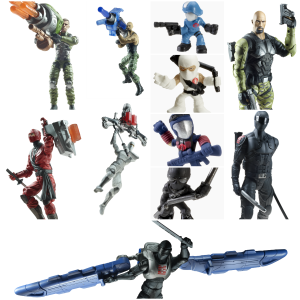 KRE-O Star Trek: Star Trek has been around for years, the updated movie with Chris Pine is super popular, and the newest one in the series is coming out. I mean, it’s Chris Pine. He’s worth a trip to the movies, and the actual movie lines are a bit updated, and fit a new generation. SCORE. With the new movies, comes a real love of the toys again, and Hasbro isn’t going to let the new love of the brand go by without some major new toys for store shelves! Before you read up on everything, head over to see the YouTube video they made. So cute. There’s a lot, so get ready! 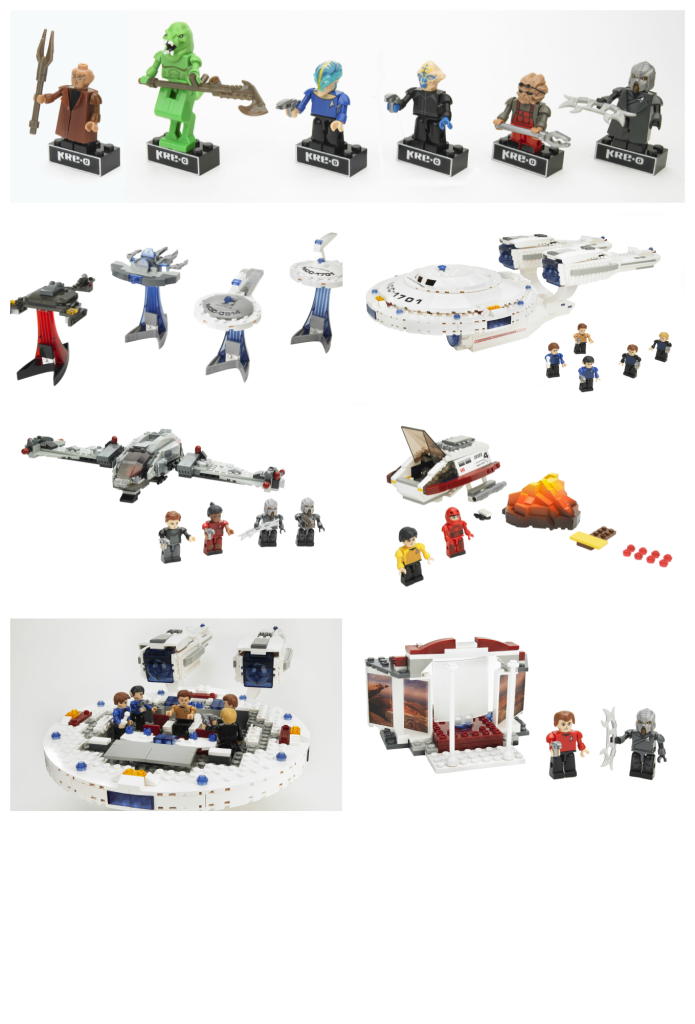 Transformers: Transformers is another line of toys that Hasbro has, which has a ton of new stuff coming out. I’m just interested in sharing the line that’s kind of celebrating the 30th year of the brand. They have the Generations series. Right now there’s a few coming out for Spring, and then later in the year, there will be a historical debut of the largest converting TRANSFORMERS figure ever made: Titan Class Metroplex. Look out for that, but for now, I’m going to share a couple I thought were rather cool! 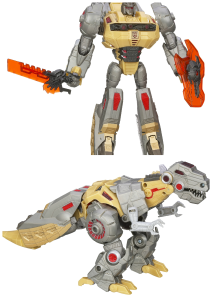 Iron Man: There is so much Iron Man action going on, it’s insane. Hasbro has a TON of new toys out, all based on Iron Man. However, I’m just into one specific line. I find the Iron Man 3 ARC FX Series unique and cool. It’s all about role playing, and the stuff is just wicked cool, plus it gets kids PLAYING, instead of sitting on their butts. Kids can just get themselves geared up like Iron Man, run around, and have a blast. Wearing the mask, the gauntlet, repulsor, and so much more.

Easy Bake Oven: Apparently, to celebrate 50 years of Easy Bake Oven fun, they’ve decided to come out with a new color in the Fall of 2013. Honestly, it stemmed from a little girl who made a big deal about her brother not being able to play with his own oven, because it only came in the pink color. Now, first, I’m not sure why a kid should have to be concerned with the color of an oven, or toy, to play with it. However, kudos to Hasbro and Easy Bake Oven for creating a silver, blue and black model. I should have waited to get my daughter one, because I hate pink, however BOTH my kids use it, regardless of the color it is.

A bonus? There’s going to be more options for baking!!!The ultimate oven comes with all the tools needed, plus it will have cookies, whoopie pies, checker cakes, pizza, and pretzels to bake with the new oven. For refills, you’ll have to head to the store for the refill packs that run you $6.99 each. You can get chocolate chip and pink sugar cookies, whoopee pies and strawberry cake, pretzels, cheese pizza, cake bars, and chocolate truffles.

Two new items out for this year: Strawberry and Red Velvet cake mix that can be used to do layer cake bars, plus petit fours, and chocolate truffle mix.

If none of this interests you, try the Trends Assortment, which runs around $14.99, and has options like Cake Pops and Whoopee Pies. Cake Pops comes with mix for 12 pops, and a display stand, plus 6 re-usable cake pop sticks, and two gift bags with ribbon. The Whoopee Pie comes with enough for 9 pies! Plus decorating ingredients are included with the whoopee pie mixes. 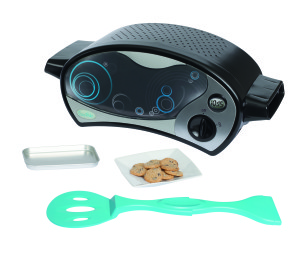 Enjoy the shopping for the Summer toy season!!! Hopefully this helped you, and you’ll be able to spot all the best of the best on the shelves at your local toy stores!!! Or online! Stock up, have things ready to pull out all summer long. Especially birthday gifts for all those summer birthday babies!