Disclaimer: Zing® sent me three toys to try out for this review. I didn’t receive any money, just the toys. The toys rock. I had fun with them, along with the kids. What? Did you think a review would be done on this blog without me getting in on the fun? Let’s be real! Big kids like toys, too! 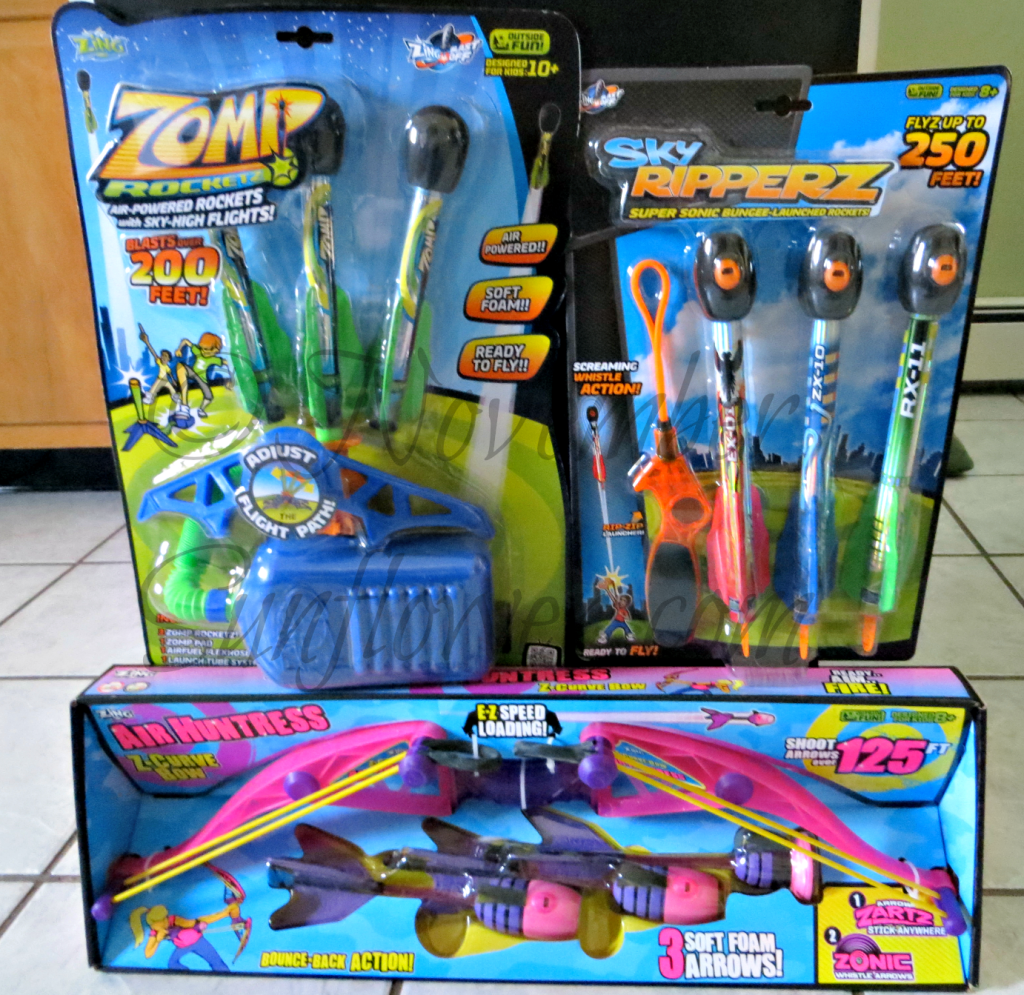 Finding things to do outdoors is a bit difficult. Everything is a little old for the kids, or way too young for them. We end up back inside, doing a craft, or we head to the local parks. Summer isn’t about crafts on a gorgeous day. It’s about getting outside, playing, and running around! It’s about awesome toys that the kids love, and of course, fight over!

Now, I’m just starting out with videos in my reviews. Be patient. I’m not use to them, but as I do more, it’ll get better. However, I couldn’t NOT use this video, as my son states CLEARLY that he wants another turn because “this is so awesome.” I don’t think there’s anything else more true. The three of us had a darn good time with the Zing® Zomp Rockets™ (I have also seen them called Zoom Rocketz.)

The proof from the mouth of my babe:

We also kind of had a few fights about who would get to go next (which I won’t share video of, I’m told that would be mean to do)….amazing how quickly kids forget who goes next after having to go across the street to locate the rocket!

Clearly, I had gone if the rocket was all the way across the street, which would make it my daughter’s turn after we tracked it down. However, The Boy tried to sneak in there…..who can blame him? They’ve played with it every nice day since we got it!

All you do is take one of the Zomp Rocketz and place it onto the launcher, then stomp with all your might.

Totally simple, but when you combine that with trying to get it across the street into the neighbors yard, or up high so it goes through the wires, or in the kids’ case, who could stomp hard enough to actually get it into the street, instead of just our huge driveway……well, it’s just plain fun! It doesn’t take much to entertain us, I guess. We’ll have to get another one, so we can do competitions! 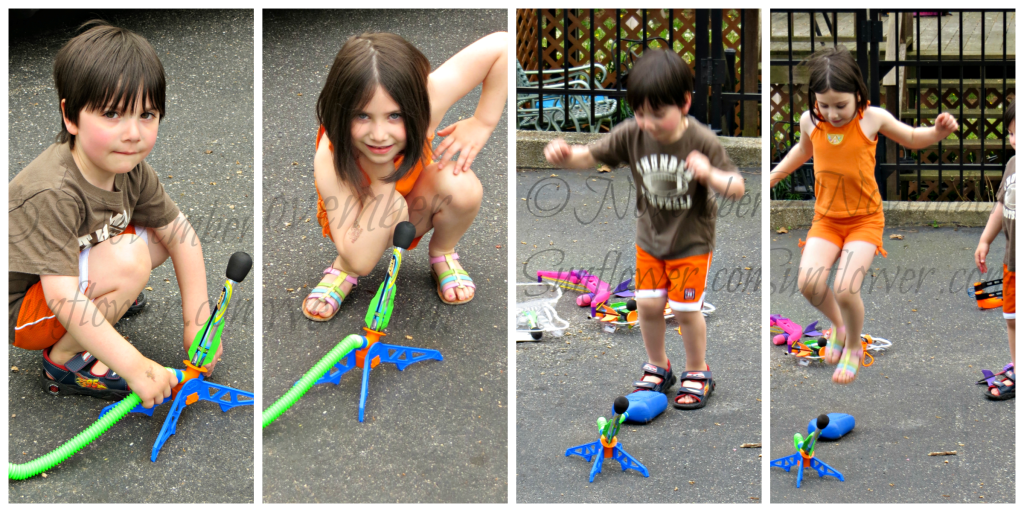 We also tried the Air Huntress™, which is PINK, and works like a bow and arrow. Little Miss was excited to try it out, so she could be like Brave’s Merida (you know, before the makeover Disney did on her when she became an official Princess – what were they thinking?) However, though my daughter is rather strong, she had a hard time keeping the bow steady, while pulling back the little foam Z-Arrows. She did love when I helped her, and she could here the whistling sound it made as it shot through the air. My son? He was too busy with the Zomp Rocketz to care about the Air Huntress. Although he did like the one Zartz (suction cup dart,) but didn’t use it for the regular purposes it was meant for…..and that’s all we’ll say about that. 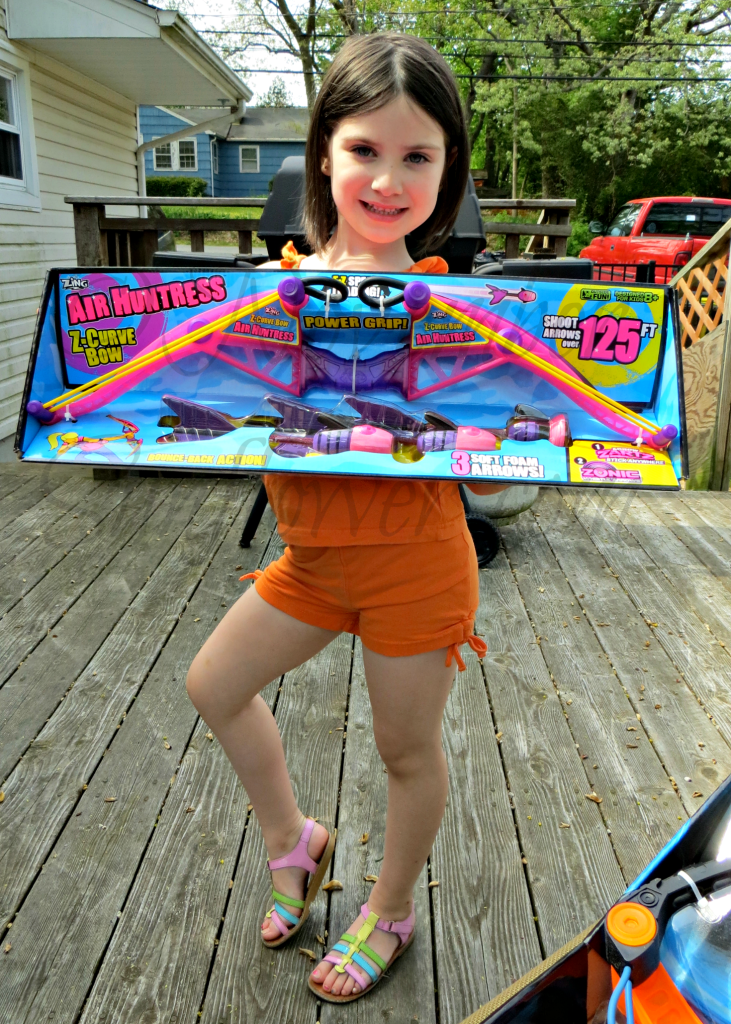 Little Miss also tried out the Sky Ripperz™. Once she figured out how to use them, which took a bit of work…..it wasn’t as easy at it sounds when you’re reading how to use it. Little Miss just couldn’t wrap her mind around how it worked. You basically attach the launcher to the hook on the rocket, pull the tab, and it just flies in whatever direction you aim it. It goes far, and it whistles. Definitely fun once you get the hang of them. Of course, it does help when it is aimed AWAY from other people, as my daughter realized when she launched it into her own chest. Good thing she can laugh at herself….and the things are pretty soft, plus she wasn’t really able to get a good distance on it, so it only sort of fell into her chest.

If she had aimed it out, and towards her brother……it would be a whole different blog post about how we had to head to the ER for face trauma.

All in all, the best value out of all three of these items? Definitely the $14.99 for the Zomp Rocketz™. The Air Huntress™ will run you $19.99, and is a good one for girls who are a bit older, and have the upper arm strength to keep the bow steady as they pull back the Z-Arrows, so they launch properly. The Sky Ripperz™, though fun, and a good price for $14.99, are more a recipe for broken windows……I can just see one of the kids taking it, and shooting it out towards a window, instead of UP, towards the sky. Play with these in a big, open area…..where there’s nothing that can break!

Totally worth it for big kids, too. Father’s Day – backyard BBQ fun to be had with Zing, for sure!