Disclosure: I was not financially compensated for this post. I received the new LEGO Ninjago Nindroids video game for the Nintendo 3DS in order to write this review. All opinions are 100% my own, and of course, The Boy’s, too! 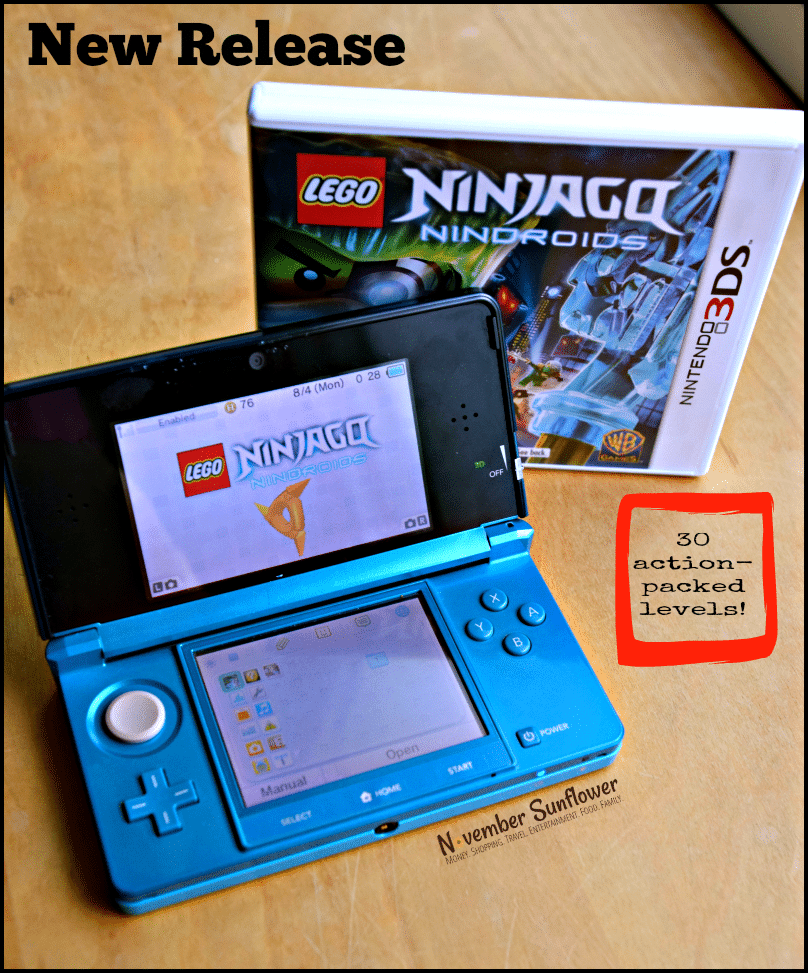 It’s summer, I know. However, there’s just days the kids want to hang out and do nothing but sit around the house. I can’t blame them. We’re always on the go, so a down day isn’t something I ever say no to. The issue with days when we’re just vegging out at home? Boredom sets in faster than normal! Little Miss can find things to do, she’s rather crafty and loves to color, draw and write. The Boy? He just wants to be entertained. Mommy’s not a circus, so I can’t always be his entertainment! Mommy wants to veg out, too!

Electronics. It’s a terrible crutch, I know. You don’t have to tell me it’s not a great choice, HOWEVER, it’s not something they do all day, every day. If it gives this Sunflower a little break, well I’m pulling out the latest and greatest to keep The Boy entertained. Our newest Nintendo 3DS game we were lucky enough to get our hands on has been a blessing in disguise. The Boy’s eyes lit up when he saw me pull out LEGO Ninjago Nindroids for his Nintendo 3DS. Both kids love the animated TV series LEGO Ninjago Rebooted. Being able to play a game where he can be a true Spinjitsu Master is beyond thrilling for The Boy.

LEGO Ninjago is based on the first give episodes of the Rebooted series. The Boy has been battling, and defending the New Ninjago City from evil Overlord and his army of Nindroids. He gets to choose his favorite Ninja to play as, and uses combo moves to punch, kick, jump, throw and Spinjitsu all over the game! He’s in heaven. There’s more than 30 action-packed levels, and I’m sure The Boy will make it through all of them as he shoots enemies with cool vehicles like Kai Fighter, Ninjacopter, Thunder-Raider, Earth Mech and so many more.

Best $29.99 you’ll spend on a DS game, for sure. If you don’t have a DS, you can also get it for Playstation Vita. I love when games come out for multiple devices. Variety is the spice of life, right?!!!!

Okay, enough about how awesome the game is, and how The Boy hasn’t put it down in three days. I couldn’t even tell you what level he’s on, but I can tell you he has thanked me for getting the game at least once an hour for the last three days. No exaggeration. The kid is in love. He’s got two gadgets he’s utilizing, and if he could play with both simultaneously, he would. Good thing the other one is a watch, so he can have it with him at all times and still carry around the Nintendo 3DS with his LEGO Ninjago game! Boys….

Special note: All photos within this post were taken with the Nikon D3300, using the AF-S DX Nikkor 18-300mm f/3.5 – 6.3G ED VR lens. Visit Nikon to check out the full line of Nikon Cameras and lenses.