The Pug vs. The Vacuum Cleaner

Disclaimer: I am a member of the Collective Bias® Social Fabric® Community. This shop has been compensated as part of a social shopper insights study for Collective Bias and their client. And you all know, my opinions, and those of my kids, are 100% OURS!

If you’ve got a dog, you’re well aware most of them shed. Now, if you’ve got a Pug…..let’s just say they shed enough for me to create at least four more dogs out of the fur the vacuum sucks up off my floors, and carpets. I have yet to meet a vacuum cleaner that can stand up to the fur of The Pug. He’s 14 years old, and I’m getting tired of the fur and vacuuming it……BEYOND tired of doing it. He’s cute, right? 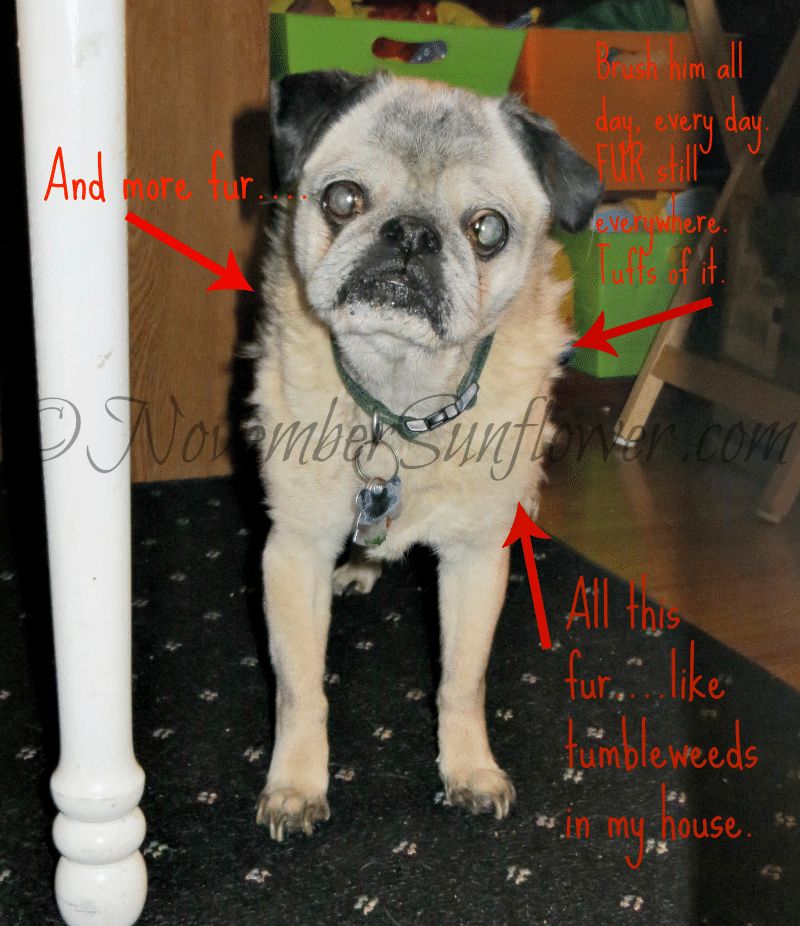 I’m not as impressed with his cuteness after vacuuming three times per week. I farmed out one of the days to the kids. Well I tried, anyway. It’s unfortunate for me, but my kids aren’t big enough to help with the current vacuum cleaner we posses. It’s heavy, even though it’s an upright cleaner. The moaning, and groaning, and more moaning of how hard it was to push around…..plus the fact that one of them broke part of the cleaner, it just was too much. I mean, this poor vacuum. Look at it!

Walmart was calling my name. Staci, there’s a light weight Eureka’s here. Only here can you get the one you’re looking for…..the inexpensive, but has a lot of sucking power. Come to Walmart, Staci. You won’t be sorry.

Trips to Walmart always start with a little lookie loo at the flyer. It’s always important to see what’s on sale. 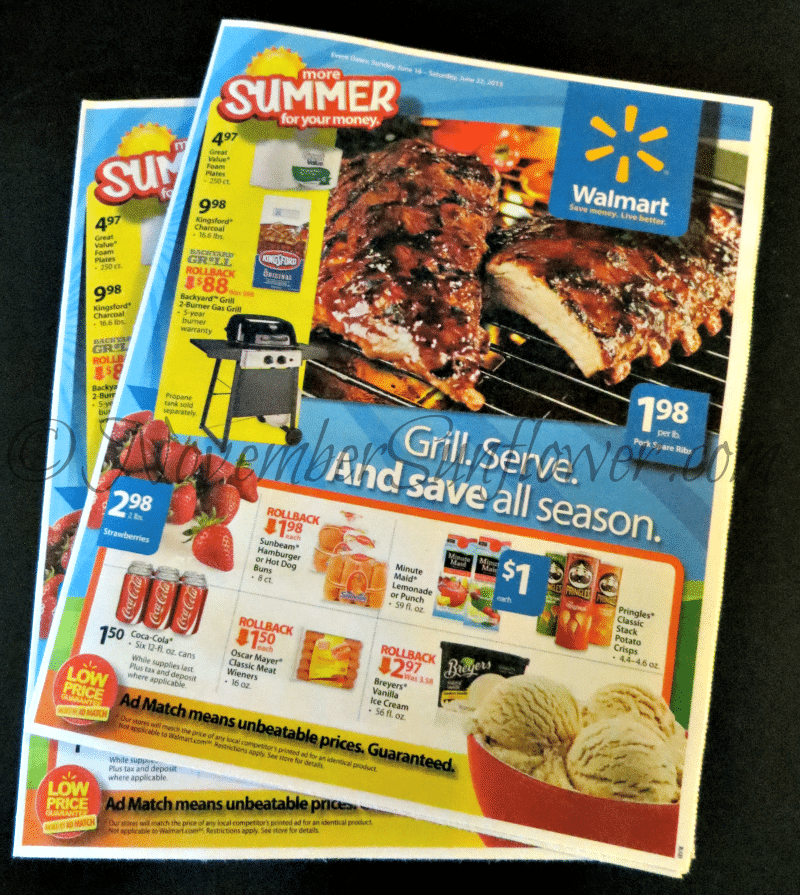 And then promptly purchase what’s not on sale…..a Tinker Bell and a Cars lamp.

The bright side is, Walmart has great prices, so even the lamps we bought weren’t expensive! Unfortunately, the kids were the only ones getting anything at this particular location! We had to head to customer service. WHY? Well, even though the Eureka AirSpeed ONE Turbo was displayed with all the vacuums at the first Walmart we went to, no one could find us one in a box. You know, so we could purchase it. Another strange occurrence? Absolutely no signage for the vacuum. There was one on the shelf, for display, but no sign telling the customers what kind of vacuum it was. It just so happens I knew it was the one I wanted, because I looked it up on my phone….I’m pretty smart like that! If someone else was looking for a great price for a vacuum from Eureka, they wouldn’t even be able to track it down! The vacuum itself doesn’t say it’s the Turbo version, just that it’s an AirSpeed ONE. Definitely important for Walmart to make sure the signs are up! 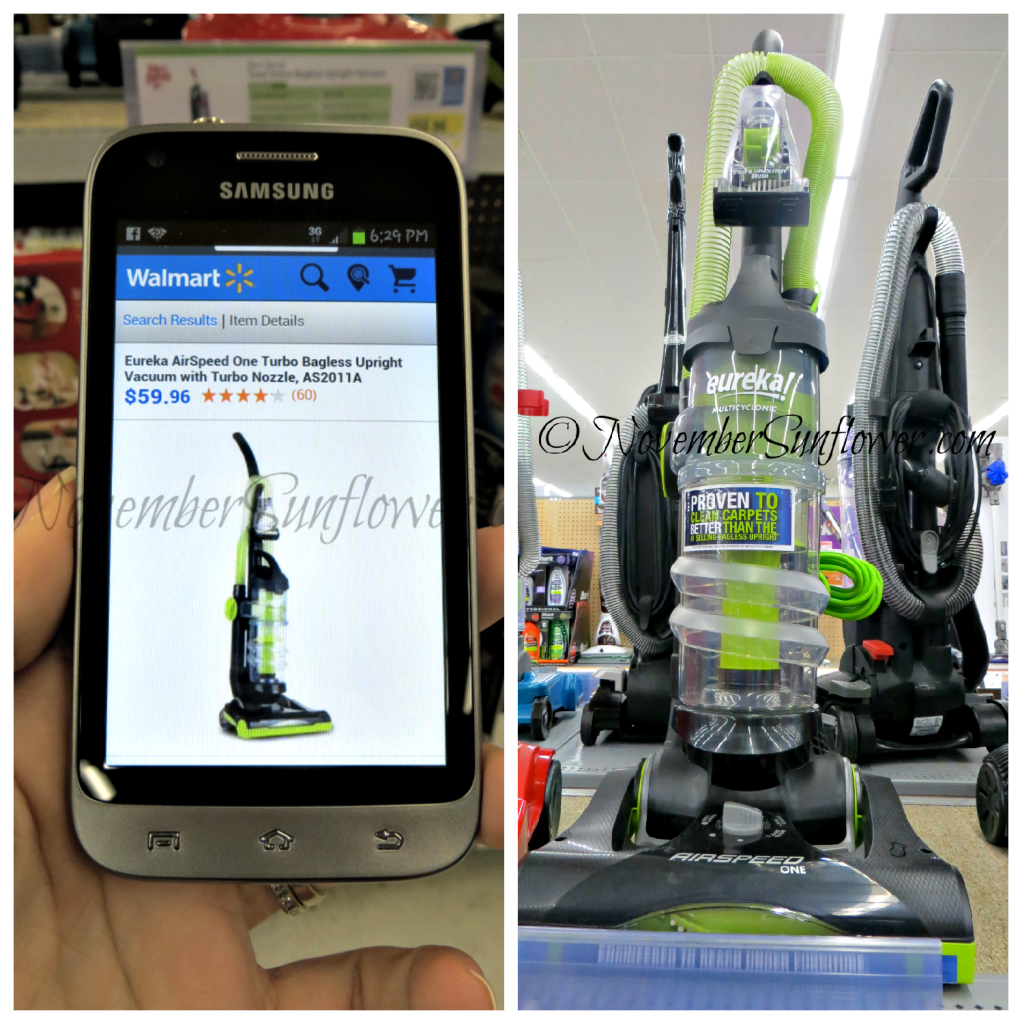 We found a few others exclusive to Walmart. The regular AirSpeed ONE. It wasn’t in stock, but at least it had the signage with it. If I wasn’t gunning for a vacuum under $100, I’d have considered the AirSpeed Rewind Pet….great price tag, just wasn’t in our budget this time around. Off we headed to Customer Service to hunt for another store! 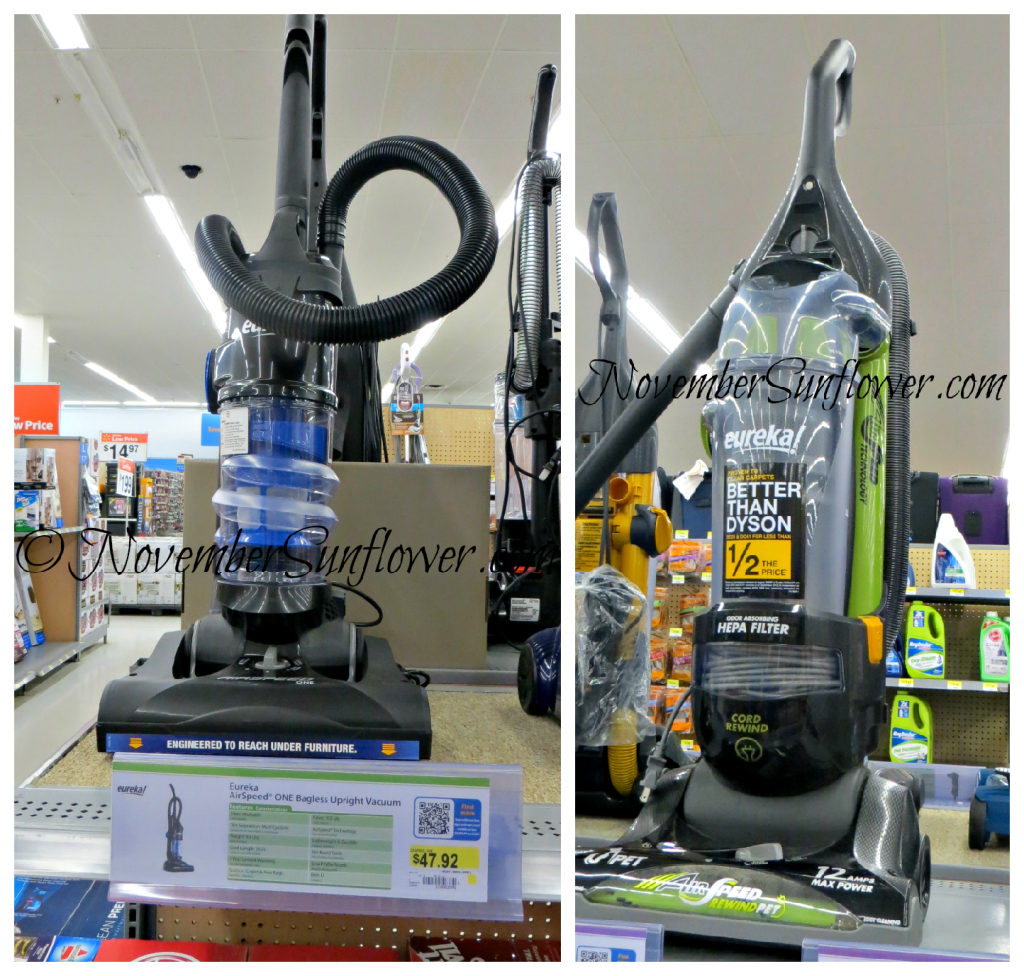 Customer Service found a store with THREE of them, but when we called the store, they hung up on us. The young man in customer service tried calling, I tried calling, both times the store hung up on us. We decided to drive there, and hope like hell they had the three in stock, like the computer system told us it did! The store was a bit further away, and we had to stop to give the kids a bit of a treat…….

I mean, seriously, you can’t hit two Walmarts in one night without a bit of a frozen treat in between stops! It’s just unfair, cruel, and would cause much chaos on the world as we know it. After our frozen treats, we piled into the car, and headed for the second Walmart.

EUREKA! We found it. 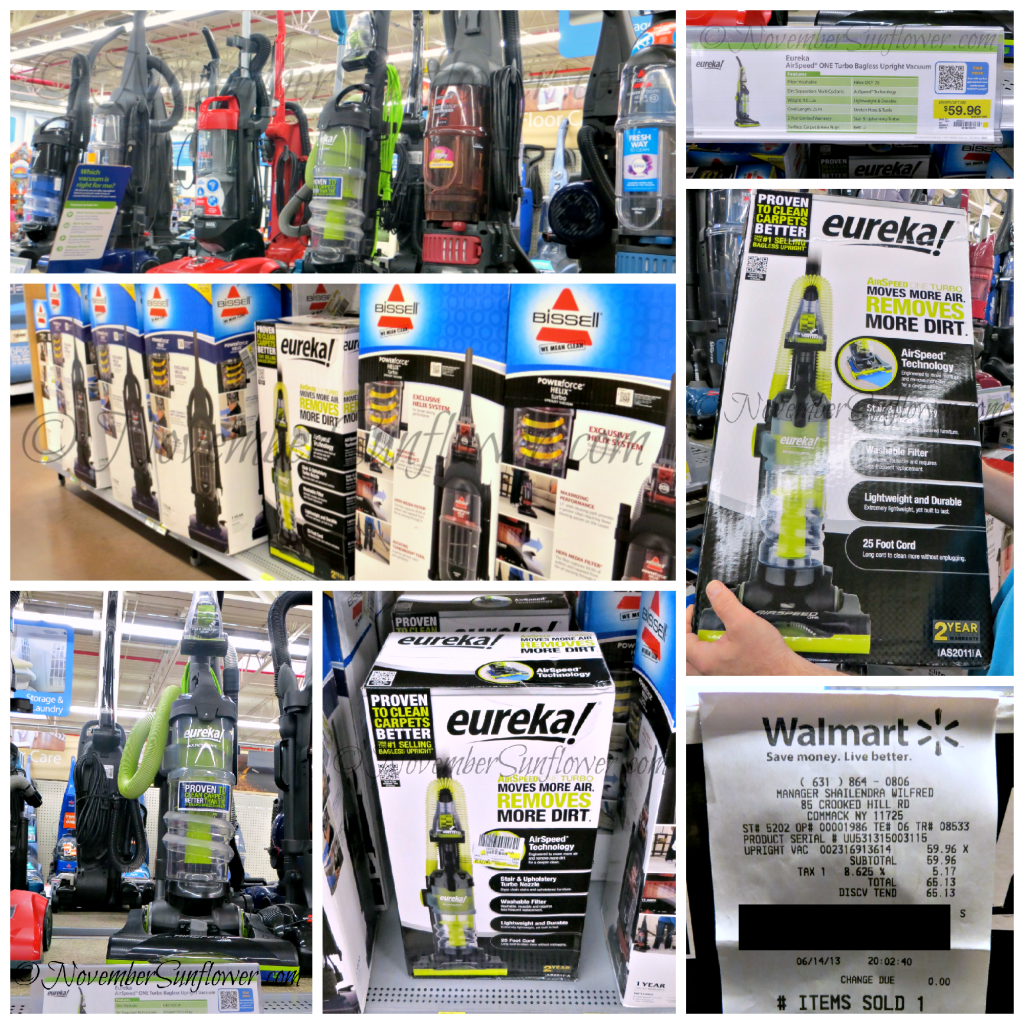 We grabbed it, and headed to the check out.

Putting the cleaner together was easy enough. They’ve even got a step-by-step YouTube video to watch, which makes it even easier!

I was worried as I put it together. The reason? I felt like it was really light, and would be total garbage. It wasn’t until I put the last piece on it, and saw it in action, that I felt at ease about our purchase. Plus, unlike my other vacuum, I can actually rinse the filters out on this AirSpeed One Turbo. Big money saver to not have to buy replacements all the time! 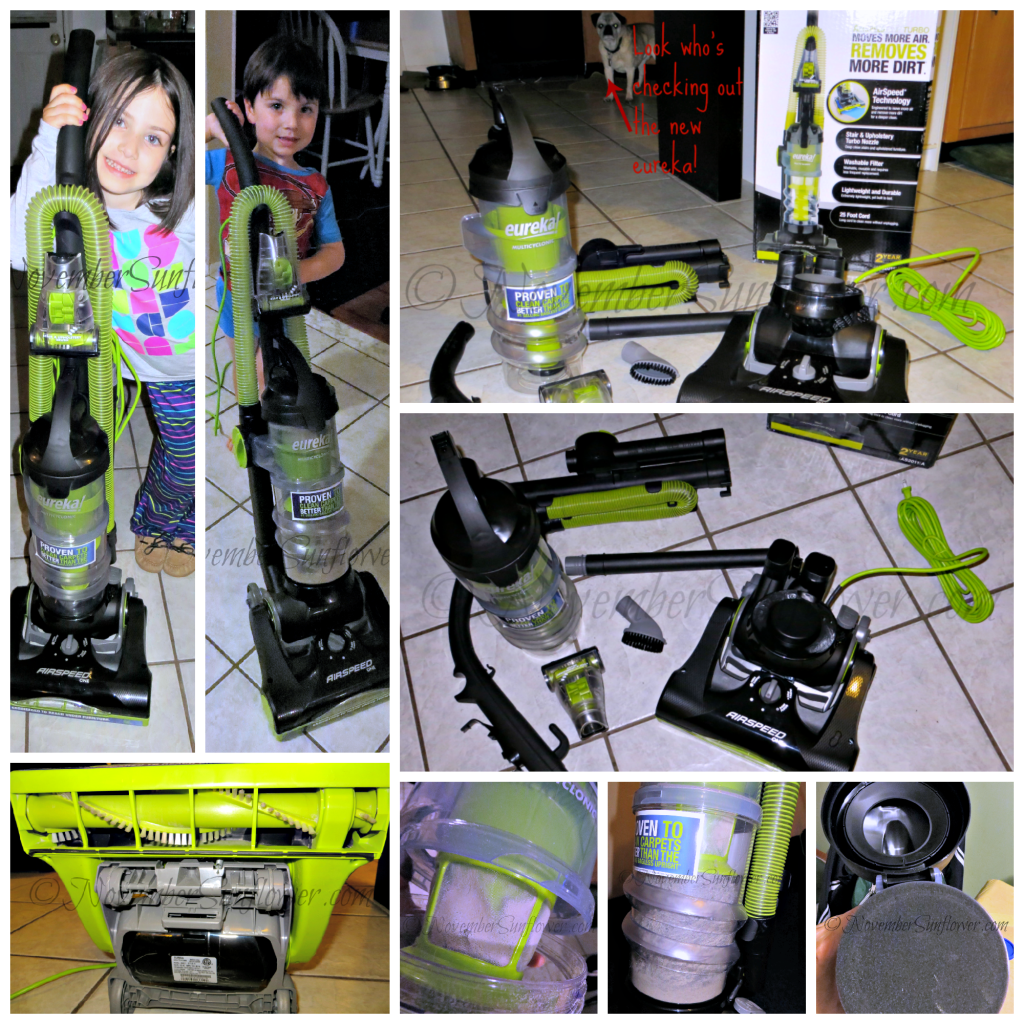 I was shocked when I plugged it in, and it was just full-on power. It kind of surprised Little Miss with how loud it was, though. Every vacuum cleaner has flaws, but for the $65.13 I paid for this little green beauty, I’ll take the noise! It sucks up Pug fur like nobody’s business, and it’s so light, BOTH kids can handle it. SCORE! Even with all the noise, The Boy wanted in on the action. We quickly realized, the vacuum is taller than The Boy. 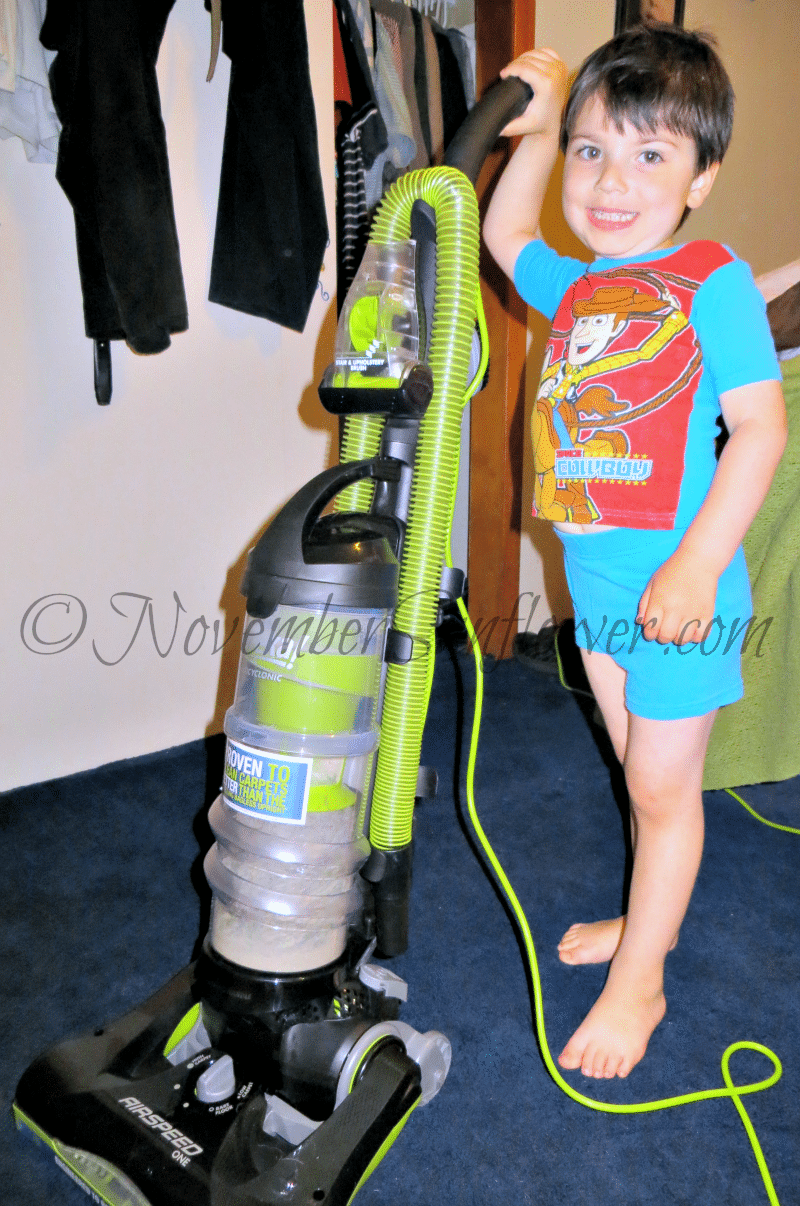 However, it hasn’t stopped him from using it. He’s not great with moving the wire around so he doesn’t get caught up in it, though. He’ll have to work on that, for sure.

But it’s got power, and sucked up all the Pug fur quickly. He also has to learn to adjust the knob so he does floors on one setting, and the carpets on the low carpet setting. It’s got more options than my last vacuum, where all I could do was floor, or carpet. Now, it’s low carpet, high carpet, and floor. It really makes a difference. One “complaint” is having to bend down to adjust the knob. It stops my flow a bit when going from one room of carpet, to one room of hardwood floors. My other one it was just a click of a switch on the handle.

Don’t take it from me, because I won’t be the one using the Eureka AirSpeed ONE Turbo to suck up the Pug fur anymore. It’s all these two, and they give it a two thumbs up salute! 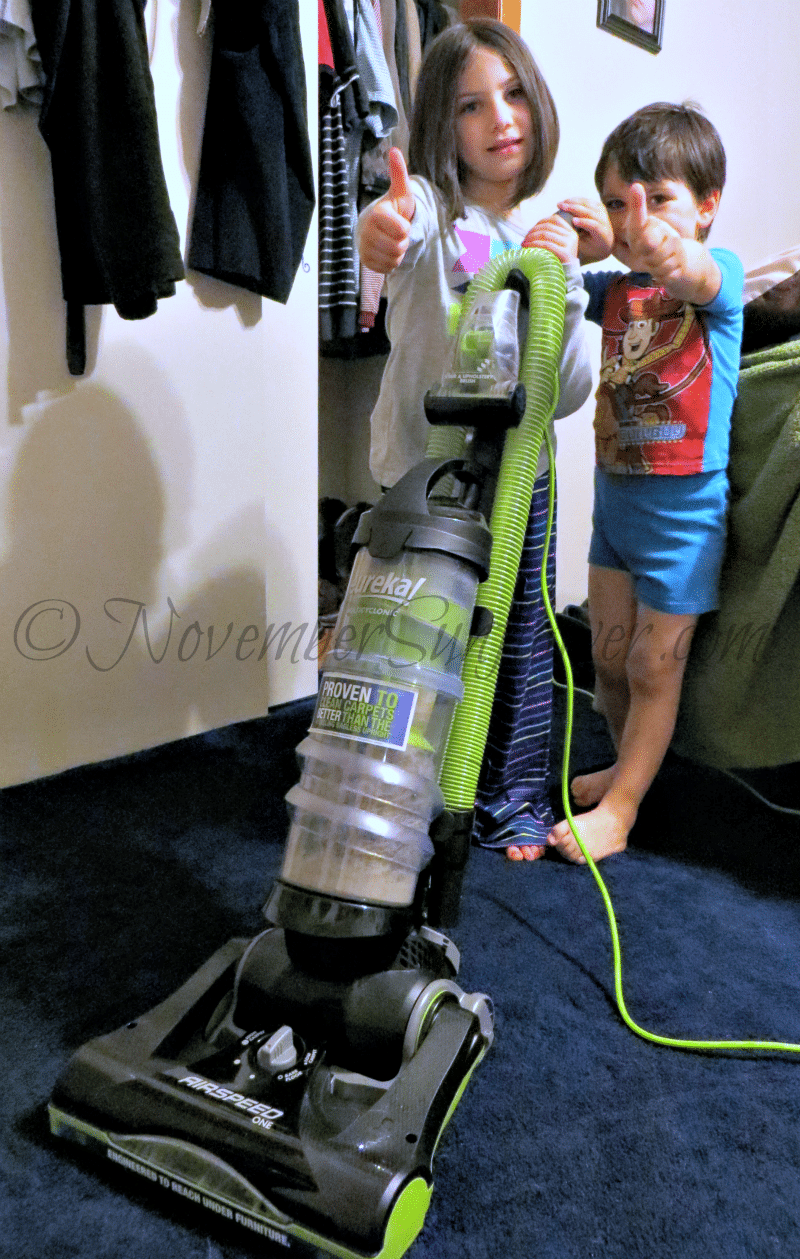 I was lucky enough to purchase the Eureka AirSpeed ONE Turbo Vacuum at Walmart, and you can check out our entire shopping experience on my Google+ album! While you’re visiting the internet, take a look at the Eureka Facebook page, and their Twitter stream, too! Great places to head to learn more, as well as, find out about the latest and greatest from the brand!

Luckily, the vacuum is light enough for the kids to share the chore of vacuuming all that Pug fur (along with a ton of their own crumbs, and pollen they drag through the house,) and I get TWO WHOLE DAYS OFF from having to suck up Pug fur from the floors, carpets, tile, and area rugs in the house.

Who wins the battle of The Pug vs. The Vacuum Cleaner? ME! Oh yeah, the winner of this battle is totally me! However, I’ll give the assist to Eureka!

***Update on the Vacuum Cleaner: We had to retire it. It had a good year and some change, but after so much usage, it just couldn’t keep up! I guess, in this round, The Pug, now almost 16 years of age, has won!