Disclosure: Disney provided me with four tickets at no charge so I could provide my feedback. All opinions are mine, and that of my family of sunflowers. 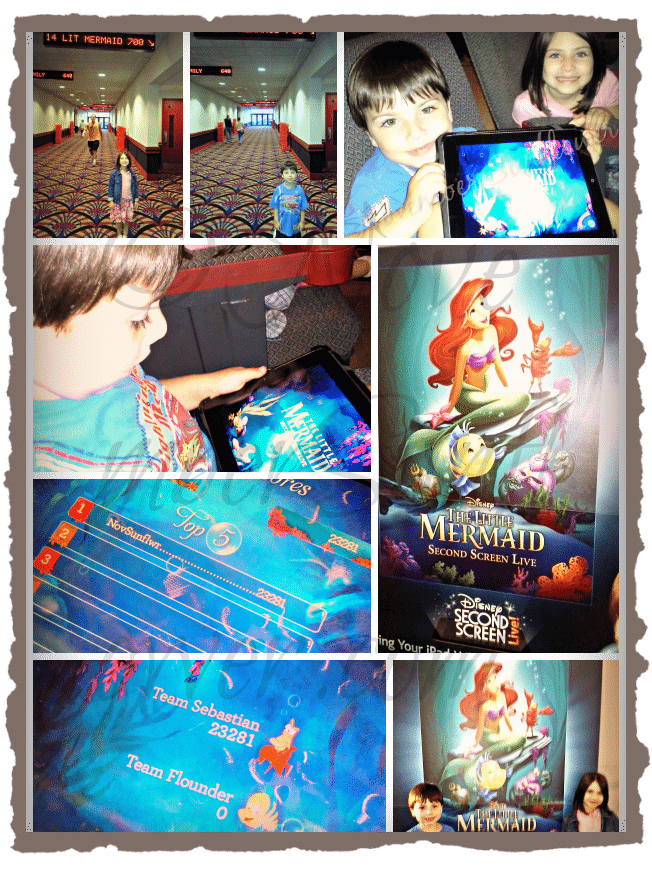 How can one resist seeing The Little Mermaid on the big screen again? Even better how can one resist being able to play games, and interact with the movie? Disney has pushed themselves to reach new heights, and to “Keep moving forward.” I’d have to say Second Screen Live: The Little Mermaid is absolutely moving forward into a refreshing new way to experience some of their older movies. I dig it. My kids dig it. The husband? Well, he’s not jumping into it as fast as we are, but he’ll come around, I’m sure.

Let’s just say, I was happy there wasn’t anything 3D involved in this movie. It seems like everyone and their mother puts out a 3D movie these days, and I, for one, am not a big fan of all that nonsense. I paid a lot of money to have my eyes fixed so I didn’t have to wear glasses, and now every dang movie I go to, I’ve got to sport glasses in order to watch it. WHAT? I was HAPPY to download an app to my iPad, and have the kids get involved in the movie. No glasses required!

The kids loved playing the games, answering trivia questions, and even singing along with the songs throughout the movie. It was easier for Little Miss, since she can read so well. The Boy was more interested in the games, which makes sense. There were mazes, popping bubbles, hitting little glowing eyes…..and lots of trivia. We chose a shell to see which team we would be on, and we got Sebastian the crab’s team. Our team won……though I’m not sure anyone in the theatre chose Flounder’s team, as it was a score of 0 at the end of the movie. I find it hard to believe NOT ONE person got anything right on his team….so I’d imagine all of us ended up picking the shell that was for Sebastian’s team.

If you’ve got kids who love the movie, the music from the movie, and can handle an iPad – it’s a great night out for the family. It definitely got all of us involved, and even though the husband said it was distracting for him, sort of like going to a movie with subtitles – you can’t enjoy the movie if you’ve got all that other stuff going on. I just smirked and asked “Were you really going to get involved with The Little Mermaid?”

Personally, if it was a brand new movie I’d never seen before – yes, I would feel the same way. Since I’d seen The Little Mermaid a million times, I was cool with doing all the interactive fun stuff! We had a good night out, and I loved watching the kids play TOGETHER to try and win for our Team Sebastian!