Shake It Off with KidzBop 27

Music brings out the best in all of us. Have you seen some of the videos of people singing along to Shake It Off, and having a great time? Even if you don’t like a particular singer, or musician, if they come out with a catchy song – you’re going to sing it! Don’t fight it. Enjoy it. 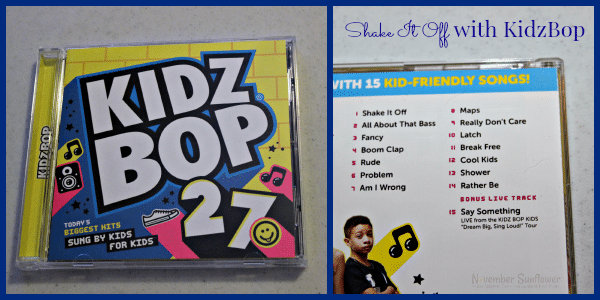 Shake it Off with KidzBop 27

If you have kids, you’ll be familiar with KidzBop. It’s a group of kids that sings kid-friendly versions of the the most popular songs that are out. They’ve been doing this for a long time, and are now up to their 27th album! It’s not the same exact kids from the first album, but all of the kids that sing on these tracks, are amazingly talented.

Luckily, the kids and I were given the chance to sample the 15 tracks before the album dropped. If you’re a fan of certain songs, but not super in love with some of the singers who perform the songs, KidzBop is a great alternative. It also cleans up the songs, so if you’re more into listening to music without anything “adult” in the song, KidzBop is the answer. Sure it’s sung by kids, for kids, but aren’t we all just big kids at heart? What? I’m the only big kid out there? Come on, that’s hogwash!

We’re big fans of all the songs when we hear them on the radio, but the KidzBop versions are actually really good. I almost prefer a couple of the songs done by the kids. Boom Clap, Shake It Off and Cool Kids are all excellent.

Available today for download on iTunes, as well as on the KidzBop website. We’re toying with the idea of attending the MAKE SOME NOISE! 2015 Tour. It’s hitting 40 different cities this year, and looks absolutely adorable.

What about you? Are you going to see if they’re coming to a city near you? Perhaps we’ll see each other????