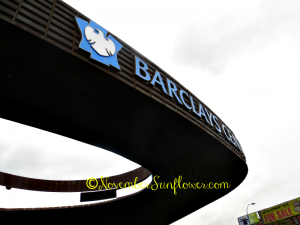 Recently, me and the family attended the Harlem Globetrotters game at the brand new Barclays Center in Brooklyn. It’s a really pretty facility, clean bathrooms, and is super close to the LIRR, and the subway system. It lacks napkins, and food vendors that are actually open during an event, and a well-staffed box office……..

The center has an amazingly friendly staff, who couldn’t apologize enough to all of us who were forced to wait on an extremely long, winding, snake-like line outside the center, in the rain. Luckily, we snagged someone who looked official (a teenager in a suit, basically), showed him our vouchers to get tickets, and were given four tickets. No waiting in that line, no worrying about being wet, but the seats were so high up, I was ready to have a heart attack. I’m deathly afraid of heights, and we were as high as you could get in that place……well, almost. Section 210, row 12. It was downright scary.

The Globetrotters are just as much of a great show as they were when I was a kid. It brought back memories of me seeing them at Madison Square Garden so many years ago…..it felt great to be able to bring my kids to see them. It would have been great if my parents could have come, but maybe next time when my Dad is fully recovered from his heart surgery, and can handle an outing like this. It might be an easier trip when they are at MSG, not sure if they even play there anymore. Anywhere you see them, you are never disappointed! It’s also pretty cool to see the first woman on the team. I thought I’d never see the day…….

All this year, they are even going to be playing for PART of the game, in pink to help bring awareness to Breast Cancer. They’ll be selling pink wristbands, headbands, and basketballs made by Spalding. A portion of the proceeds will be going towards Breast Cancer research, so that’s pretty darn sweet of them! 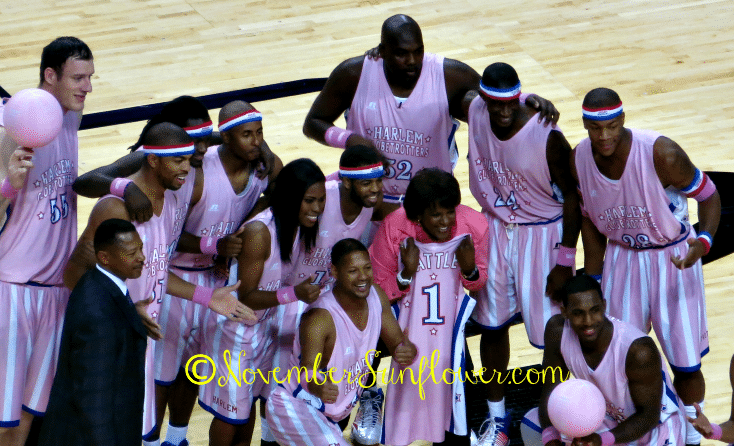 I got great pictures, though, since my new camera (which we had to purchase while on our Disney Cruise debacle, thanks to our son breaking our old one at the Bibbidi Bobbidi Boutique) has an amazing zoom lens. While snapping away photos of the Harlem Globetrotters, and Globie (their mascot,) I turned and tried to sneak a shot of Little Miss watching. She quickly turned to face me, and pose, as always.

When I came home and downloaded the pictures, I immediately thought to myself: Damn, she looks like the daughter from The Incredibles.

What do you think?