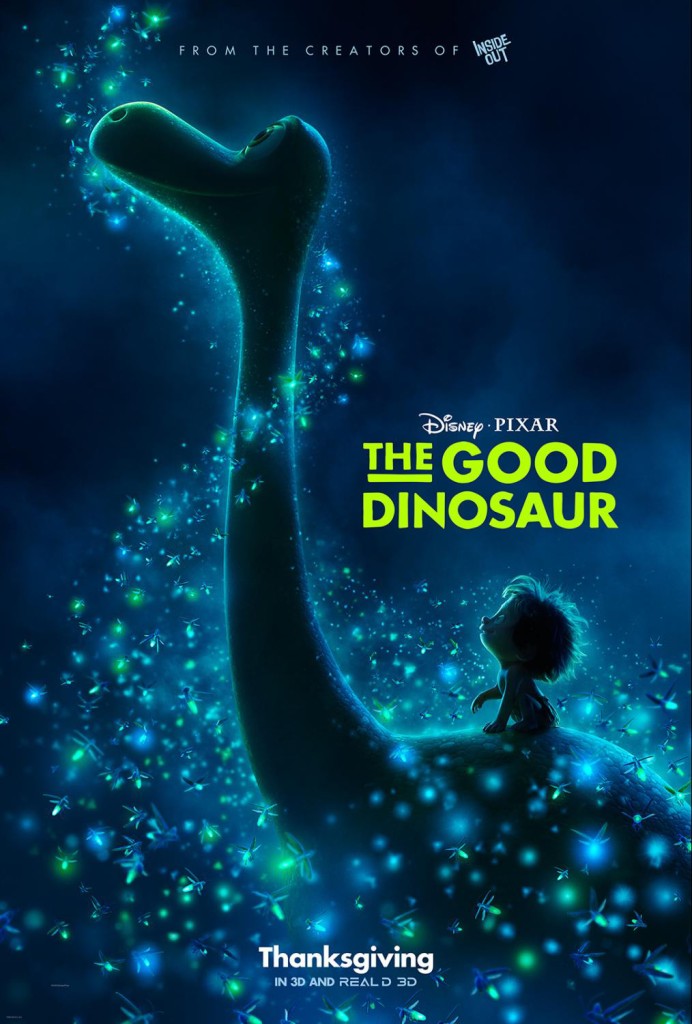 Pixar, I expect more from you guys! The Good Dinosaur is cute, but it’s not at the level of your previous works of art. Visually, it’s breathtaking. However, the story….unique idea, not as well executed as one would have hoped it would be.

When your kids ask to see an animated movie, you cringe. Yes, face it, you all cringe. Let’s just say, when the kids saw The Good Dinosaur previews on television, as they watched all their shows on the Disney Channel, it was a given they’d expect to head out to see it. Since it had the Pixar stamp on it, I figured it would be well worth the trip to see it. Disney asked me to attend, I said for sure, and off we went.

Can I tell you, it started out promising, and then went down hill from there. Listen, I get the story line. It’s adorable. Unique. What if that asteroid missed our planet, and humans were hanging out with dinosaurs? Intriguing. Great start. Pixar had a brilliant idea, but failed to make it work. As Mr. Sunflower put it no uncertain terms, “it was a hike up a river, and back down a river.” Basically, a bit of snooze fest. Okay, a large snooze fest.

Visually, the movie is spectacular. While watching the dinosaur walk up through the brush along the river, it was as if it was no longer animation. You would have thought there was an actual dinosaur walking on a mud path, with leaves everywhere. INSANE how far animation has come. Oh, and the beautiful fireflies were magical. Like the WISPS from Disney’s Brave. Obviously animated, but gorgeous none-the-less.

Basically, it fails to entertain through much of the  movie. It has cute parts, where we laughed out loud. There are sad parts, because we all know Disney loves to off parents, right? It also has some shocking parts, you’d never expect. Well, at least two. I don’t want to give them away. All I will tell you is, when Spot tries to feed Arlo, just pay attention to what he does! And keep those “flying dinosaurs” in mind when looking for the other shocker!

It’s missing a great soundtrack, too. Music is so important in a movie, and Arlo, The Good Dinosaur, doesn’t get a great soundtrack as he tries to make is mark on the world. However, I cannot get enough of Spot, the little “human” who causes lots of mischief. He reminds me of my own little beast, who has a heart of gold.

I recommend waiting for it to be on TV. Or, one of those websites you can order it from! The Good Dinosaur is definitely a cute movie. However, I’m not sure it’ll entertain little ones. Many kids at the preview were bored, and antsy throughout the movie.

Since I’m not a movie producer, I’m not sure what it needs. However, at the end of the day, LAUGHING is always a great way to entertain. Perhaps a little more of the FUNNY would have been lovely. A little more music to get through the troubled spots. Oh, yes, perhaps a little more ENTERTAINMENT for the crowd. Sorry, Pixar, Good Dino falls flat and that’s just so not what I’d expect from our beloved Pixar.