Disclosure: Disney was nice enough to send me, the kids, and Mr. November Sunflower to see the movie at a local theatre on Long Island. No monetary compensation was offered, just a chance to view the movie so I could give my honest opinion about #Maleficent.

Honest to goodness truth? I’m not a fan of Angelina Jolie. I think she’s a fantastic humanitarian, but as far as movies…..she’s not someone who’ll make me go see a movie. Actually, more often than not, if she’s in a movie, I’ll more than likely pass on it. She just takes herself too seriously, in everything. Well, Disney’s choice to use her in their newest film was genius. Maleficent movie was cast perfectly with Jolie. PER-FECT-LY. 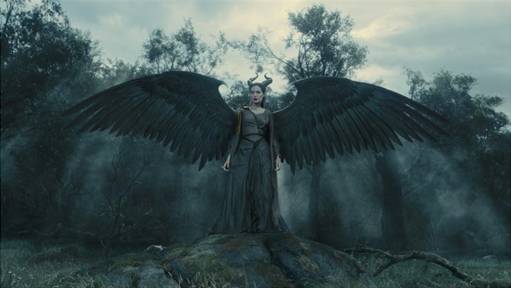 You’ll have to go and see the film to find out the entire story, and how awesome a job Disney did with the “other side” of the Sleeping Beauty tale. All I can say is Maleficent was very misunderstood. Well, to be honest, all women are misunderstood, aren’t we? We’ve got a lot of depth to us, but at the heart of all of us is this: we don’t like to be hurt. When we get hurt, we sometimes don’t think before we react.

Now, the movie itself is worthy of 3D. It’s got a lot of aspects to it you’ll appreciate more with the 3D experience, however, it’s not a MUST. It’s still beautiful on screen if you’re watching it old school, and nothing comes out at you! The scenery is beautiful, dark through a lot of the movie, but beautiful. Angeline Jolie is, for the first time in a movie I’ve seen her in, funny. She’s got a dry humor that’s perfect for Maleficent. Is she giving you belly laugh until you cry kind of laughter? No. It’s subtle, and if you’re laughing at one thing you might miss a couple of subtle follow ups.

Basically, Jolie doesn’t take herself too seriously in this one, and it works amazingly well with her fellow cast mates. She plays well with her sidekick, as well as Aurora.

What it all boils down to, as in every Disney tale, is true love. I’d go see this one again, and I know the kids would go again, too. I think my husband would probably go see it again….if the kids asked him to go with them.